On the running list of issues with early 5G devices, high prices and inconsistent millimeter wave performance have emerged as non-trivial concerns for both consumers and carriers — problems that chip and device makers will need to solve. Today, Qualcomm announced that it’s tackling these issues with several new 5G components, all of which will start appearing in consumer devices next year.

For consumers, the biggest news is that 5G modems will be coming to a much wider price range of devices in 2020: Qualcomm will be expanding 5G support past the current Snapdragon 855 to additional 8-series, 7-series, and 6-series chips next year. While flagship phone customers can look forward to superior 5G performance in a post-855 chip that’s yet to be announced, Qualcomm will also bring 5G to non-flagship models, including a 5G modem and RF solution for 6-series chips, and a fully integrated 7-series 5G system-on-chip manufactured using a 7-nanometer process.

The goal, Qualcomm explains, is “to make 5G accessible to more than 2 billion smartphone users” by broadening the types of devices that can include the technology. All three of the Snapdragon tiers will support both millimeter wave and sub-6 frequencies, as well as both standalone and non-standalone 5G standards, dynamic spectrum sharing, and multi-SIM technologies, enabling OEMs to offer their products globally. Non-phone devices are also likely to benefit from the broader 5G chip support.

Twelve OEMs are already on board to use the integrated 7-series 5G SoC, which is now being called the Snapdragon 7 Series 5G Mobile Platform, and entering commercial production in the fourth quarter of 2019. Devices from LG, Motorola, Nokia/HMD Global, Oppo, and Vivo are expected to hit the market “soon thereafter,” starting in early 2020. 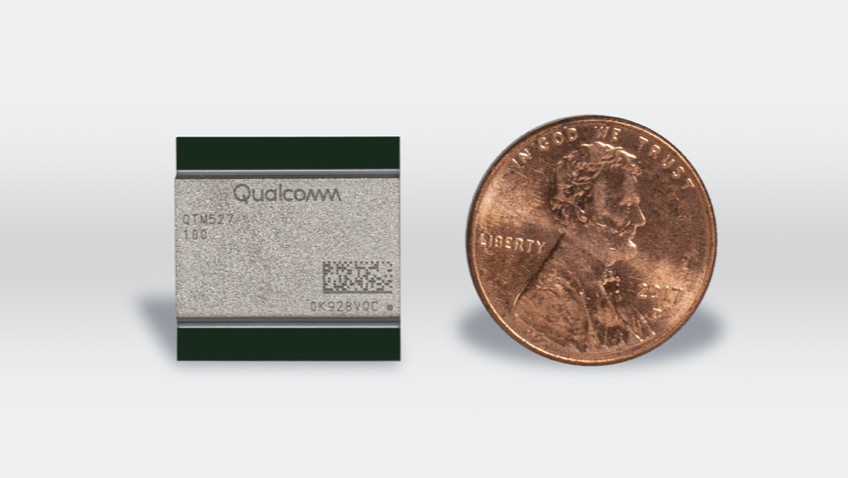 Above: Qualcomm’s new QTM527 millimeter wave antenna, roughly the size of a penny, is designed to be used in home broadband modems.

Qualcomm has also developed a new 5G antenna system, QTM527, that will extend the range of millimeter wave signaling beyond current limitations, specifically for fixed wireless solutions such as home broadband modems. The QTM527 promises to let 5G modems reach millimeter wave towers at typical distances of 1.7 kilometers (1.06 miles) in rural environments or 1.1 kilometers (0.68 miles) in urban settings, though maximum unobstructed distances can be even longer.

Carriers will be able to use the QTM527 to deliver even faster cellular broadband speeds than existing cable modem-rivaling solutions. Based on aggregation of 800MHz of millimeter wave bandwidth, carriers could deliver up to 7Gbps download speeds, which would be seven times faster than the premium gigabit fiber packages offered to consumers. 5G modems with the improved performance are likely to become available in 2020.

Going forward, Qualcomm says that it’s going to place an increased marketing emphasis on the value of its end-to-end 5G modem, RF transceiver/front end, and antenna solutions, referring to them collectively as the “Snapdragon 5G Modem-RF System.” While the company isn’t changing the way it’s licensing and selling products to OEMs, it’s hoping to make clear that there are going to be performance and power efficiency advantages when all of these parts come from one vendor, rather than pairing a Qualcomm modem with, say, a Broadcom front end.

Most OEMs are already using end-to-end Qualcomm solutions, the company says, including all major players — though recent partner Apple, currently an outlier in this regard, was notably not mentioned or addressed. Choosing a fully integrated Qualcomm chip and wireless package enables OEMs to focus more on differentiating their devices’ look and feel, rather than on the harder engineering challenge of getting rival chips to perform ideally together.