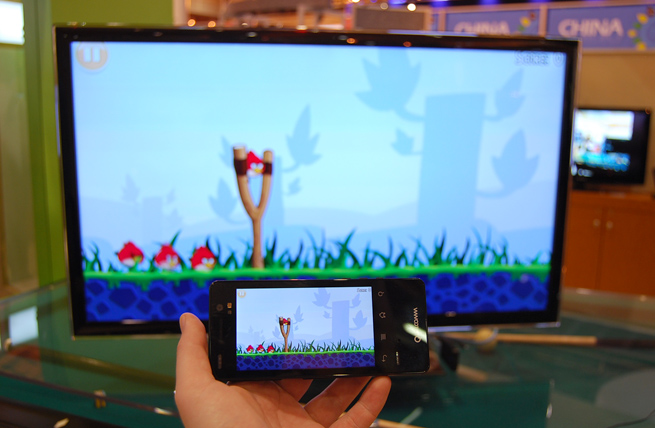 Essentially, the Wi-Fi Display mirrors everything you do on your phone on your TV. When you play a game, look at photos, or watch a movie on your phone, all of that shows up with almost no lag on a connected TV set. A phone with a Wi-Fi Display chipset inside connects with a receiver that hooks up via an HDMI port on your TV set.

Qualcomm’s Wi-Fi Display is a technology standard that is enabled by the company’s components. The company showed off the new tech at the CTIA Wireless conference in New Orleans and representatives let me try it out to get a better feel. This was the first time the company has allowed folks to test a complete set up, and in the past, Qualcomm has never had a receiver on hand to simulate real performance. To test it, I played a few levels of Angry Birds simultaneously on an Android-based test phone and a Samsung smart TV.

Qualcomm representatives said the tech will find its way in several major manufacturers’ phones in the “second half of 2012.” We expect prominent Android phone makers like HTC to release models that support the new industry standard.

Watch a demo of the Wi-Fi Display below: