SAN FRANCISCO — Quip, a startup that had the nerve to come up with a word processor for the 21st century, has now gone a few steps further and devised spreadsheet-making capabilities. But Quip won’t merely offer it as a standalone app, like, say Microsoft’s Excel.

After all, while you could add a table to a Word document, they “stink,” Bret Taylor, chief executive and a co-founder of Quip, told VentureBeat in an interview. “I can’t actually do anything for real there.”

Quip’s engineers are convinced that full-featured spreadsheets can and should coexist alongside other kinds of content in documents, even on teeny-weeny smartphone screens. Today Quip is introducing the feature, long in the works, to the rest of the world.

On Quip, Taylor showed me how he could tap here and there on his new iPhone 6 with a specially designed button-rich keyboard and cook up a complex formula in a spreadsheet . And he could use the data from one spreadsheet in a document to populate the data in another one. He could also switch from a neat little embedded table in the document to a full-screen spreadsheet and back.

Below and above the spreadsheets, he could stick a checklist, a headline, a photo, and a few paragraphs of freeform text. And his colleagues could watch and even “like” every single change he made in a chat window.

In essence, then, Quip has gone against the trend that Foursquare, Path, and even Taylor’s former employer, Facebook, have pushed in the past few months — the dividing up of big mobile applications. Instead, Quip is pulling many functions together.

Taylor describes his startup’s documents as “sort of one canvas in which you can put everything.” Indeed, that’s what Quip does for letters to its board members, Taylor said. As a result, the latest figure in a spreadsheet can appear in a paragraph elsewhere in the document.

Such unification of components could attract attention. That’s because it stands out from online mobile spreadsheet apps from companies like Google and Microsoft. Yes, those two companies have been bolstering their mobile capabilities, but with thousands more employees than Quip, they might not be able to move as fast as the tiny San Francisco startup can. 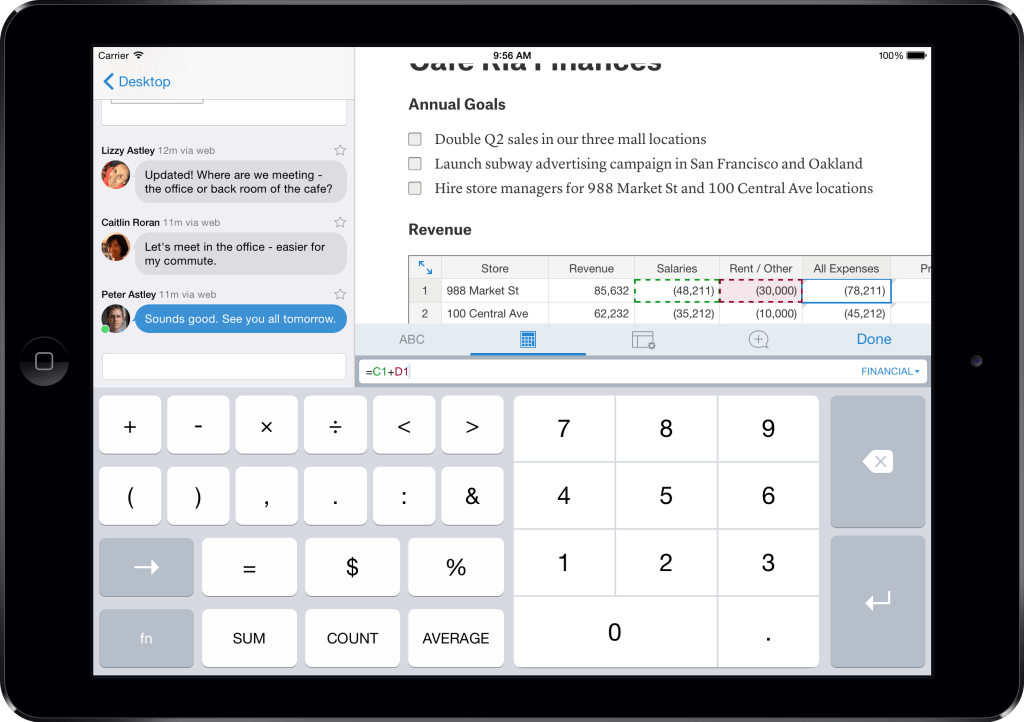 Above: Notice the Quip-designed numerical keyboard in action.

And Quip has more to do. It wants to keep going beyond word processing and come up with additional tools people can use to collaborate, Taylor said. Just don’t be surprised if they get wedged in with the current app.