It’s too early to know if BlackBerry’s Priv Android smartphone will save the company’s hardware division, but the few crumbs of evidence we’ve seen so far are encouraging. And the first victim of this potential success will be the company’s own homegrown platform, BlackBerry 10.

Until earlier this week, it wasn’t clear to me if this would be the case. The company has taken great pains to assure millions of loyal fans who have sworn by BB10 — even if the mass market consumer has not — that their mobile operating system is alive and well, and that it hasn’t been abandoned.

Last year BlackBerry went out of its way to footnote the original Priv announcement with another, seemingly unrelated element of its roadmap concerning a future upgrade to BB10.

But during an interview at CES, CEO John Chen said something that changed everything: In response to a line of questioning from CNET, he acknowledged that the company was only planning on launching Android hardware for the remainder of 2016 (not a lot, though, just one or two phones).

When pressed by CNET as to whether this spelled the end of BB10, Chen responded in a way that simultaneously gave some fans new hope, while convincing others that their worst fears had been realized.

Chen also hopes the Priv will help improve the company’s viability, repair the brand and eventually make it possible to produce another phone running BlackBerry 10 — although he said it’s too early to talk about those plans.

On its surface, that statement does seem hopeful: A successful Android experiment could also give BlackBerry OS new life. But put under a microscope, it’s hard to imagine a scenario where such a series of events might actually come to pass.

BlackBerry 10, while beloved by the company’s die-hard fans, has not helped the company’s fortunes. The graph below shows BlackBerry’s performance when BB10 was the sole platform available to consumers. The results were not only poor, they’ve been getting steadily worse. 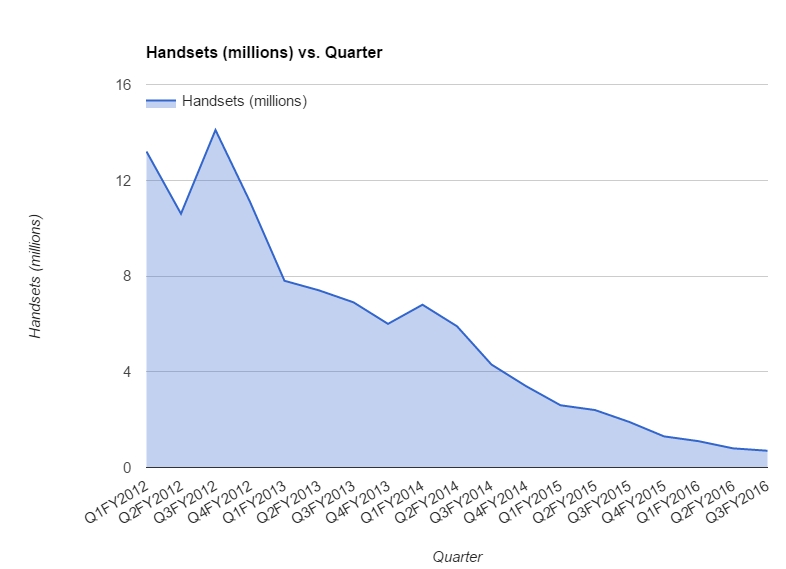 Are we really expected to believe that once the company finds a winner in Android, after so many years in the desert, it’s going to return to manufacturing the exact same type of devices that led the hardware division to the brink of extinction in the first place?

There are undoubtedly some BB10 proponents within the company who would like to develop new QNX-powered handsets, just as there are some fans who would like to buy them. However, it defies business logic that a for-profit company would be willing to divert resources from a profitable endeavor to a historically unprofitable one.

Leveraging Android’s success to prop up BB10 is just not a realistic path, and in fact, I would argue that BlackBerry is being somewhat irresponsible by giving fans the impression that it actually might be.

One of the main problems cited time and again by both company executives and handset owners is the lack of a healthy BB10 app ecosystem. In fact, Chen stirred up a bit of controversy in early 2015 by issuing an open call for so-called app neutrality, the rather far-out idea that developers should be required to ensure that their software is compatible with all major platforms.

As if the app situation were not dire enough already, now that developers know that 2016 will be devoid of any new BlackBerry 10 hardware, what do you think their reaction is going to be? Are they going to keep developing new applications, and continue to support and update existing titles?

Certainly not. By revealing the 2016 focus on Android and Android alone, Chen telegraphed a very clear message to the remaining BB10 development community: Don’t waste your time here. Use your talents to develop products for platforms with a future. We’ll call you in 2017 (or beyond) if we need you back.

But that last bit just isn’t going to happen; mobile platforms are not well-suited to cold storage — you can’t cryogenically freeze your OS and expect to resuscitate it at some later date. Once the door is slammed shut, there’s no opening it back up.

So what’s a BlackBerry fan to do? I took a (decidedly unscientific) poll on Twitter to try to better gauge the pulse of the fan community. The good news for BlackBerry is that the overwhelming majority of voters seem to care more about the company than they do about its platform: Over two-thirds of respondents would rather see a healthy Android-powered hardware division than no new devices from the company at all, period.

[POLL] BlackBerry fans: which of these scenarios do you prefer for the future of the hardware division?

Still, that one-third minority is not insignificant. These are people who will likely never buy an Android device from BlackBerry; for all intents and purposes, they are customers lost. Worse, they are leaving the fold with a bad taste in their mouths, and probably are not shy about broadcasting their displeasure. Once BlackBerry OS’ biggest fans, it’s quite easy to see this demographic transforming into the company’s most vocal critics.

It’s not a great situation to be in if you’re BlackBerry, but I think that, at some point, the company owes its fans and supporters some closure on the fate of BB10. Instead of filling some people with false hope, and others with exasperation, while also confusing the marketplace, it needs to internally formulate an honest assessment of the current state of BB10, conveying the result clearly to its fan base.

There are plenty of developers out there who have given some of the best years of their mobile lives to a platform that’s in a constant state of flux. The current ambiguity isn’t doing them any favors, and in the long run, I think even the most disappointed BB10 enthusiast will respect BlackBerry a lot more for proactively delivering a frank, non-sugarcoated briefing on what lies ahead.

As this piece was going to press, John Chen coincidentally published a post to the Inside BlackBerry blog titled “Showing Our Commitment to BlackBerry 10 at CES 2016.” In what has become something of a pattern, Chen discusses upcoming dot version updates for BB10 (10.3.3 and 10.3.4) as proof that the company has not abandoned its customers.

But again, absent from this — and other BB10 status reports — is any guidance on the hardware side of the equation, a critical piece of the puzzle for fans and developers alike. After the rollercoaster ride they’ve endured, they deserve better.