The research house IDC said in its worldwide wearables forecast that 45.7 million of the devices will ship in 2015, and that shipments will reach 126.1 million in 2019. That represents a five-year compound growth rate of about 45 percent, IDC said.

“Smart wearables” — that is, wearables capable of running apps — will fuel the growth of the space. These devices include the Apple Watch, Motorola’s 360 smartwatch, and the Samsung Gear watches. 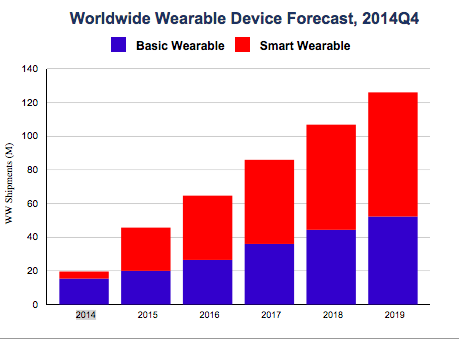 “Smart wearables are about to take a major step forward with the launch of the Apple Watch this year,” said IDC analyst Ramon Llamas. “The Apple Watch raises the profile of wearables in general, and there are many vendors and devices that are eager to share the spotlight.

“Basic wearables, meanwhile, will not disappear,” Llamas said. “In fact, we anticipate continued growth here as many segments of the market seek out simple, single-use wearable devices.”