In a bid to follow gamers wherever they play, Razer has unveiled its smartphone for gamers. It features a super-fast display that refreshes quickly and runs games smoothly.

The smartphone debuts this month for $699, available on November 17 at the Razer stores in the U.S. and some European countries. In Europe, it will be available exclusively on the carrier Three. For that price, you could also get an iPhone 8 with 64GB of memory.

“There is still room in the phone space to be innovative, despite how mature it is,” said Eric Lin, product marketing manager at Razer, in an interview with GamesBeat. “If you look at when Razer entered industries, like desktops or laptops or consoles, it was when that platform was considered viable as a serious gaming platform. We are now at this stage in mobile.”

Titles such as Hearthstone, Vainglory, Honor of Kings, are demanding titles that are drawing hardcore gaming audiences, Lin said. 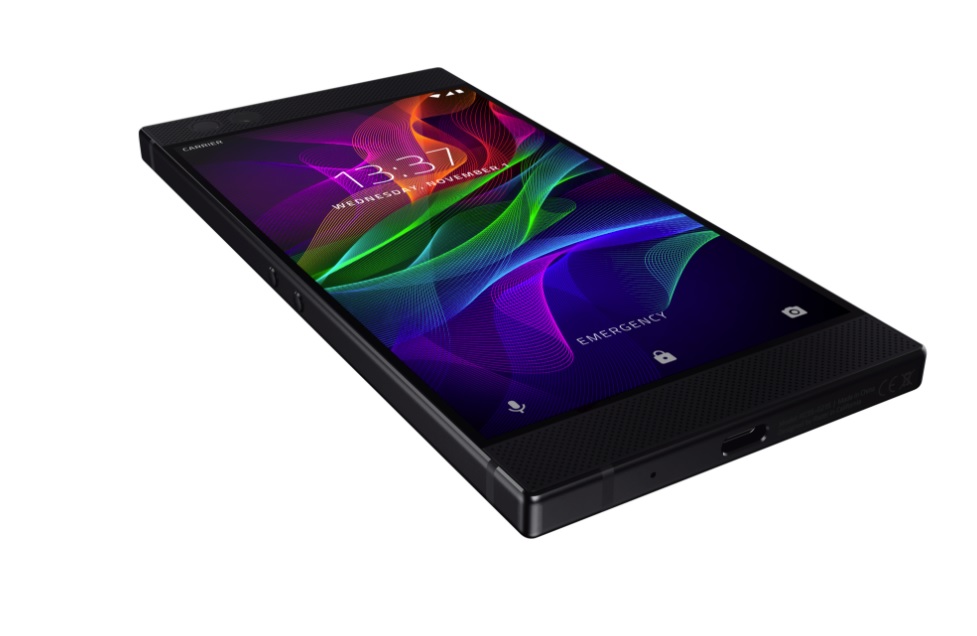 Above: Razer smartphone has a 120-hertz Ultramotion display.

The smartphone has 120-hertz UltraMotion display built by Sharp. It has a 5.72-inch Igzo liquid crystal display (LCD). It has a resolution of 1440p, or 1,440 pixels by 2,560 pixels. That’s also known as 2K resolution. It has a wide color gamut, and uses Corning Gorilla Glass 3. Right now, the only other 120-hertz smartphone is a Sharp model in Japan. The Razer model is designed for landscape mode usage primarily. The frame rates range from 60 frames per second to 120.

“If you are looking at a web page, we can ramp down the power, but if you start scrolling, we ramp up the performance,” Lin said. “This really comes in handy with gaming.”

When you are playing a game, the refresh rate can match the output frame rate for the game. The tech is like the equivalent of tear-free displays that run PC games at high speeds.

“You never get any tearing or jaggies,” Lin said. 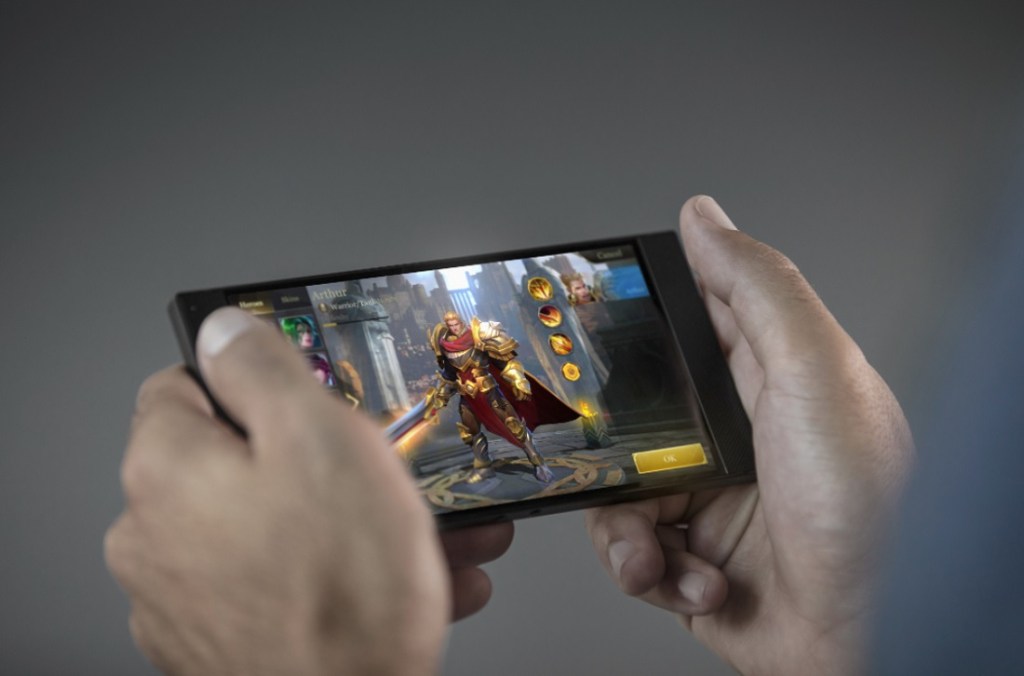 Above: The Razer phone is designed to handle high-end mobile games.

The phone has two rear cameras with 12 megapixel image sensors. One has a wide angle, while the other has 2X zoom. The front-facing camera has an 8-megapixel sensor. It also has two front-facing stereo speakers with dual dedicated amplifiers and Dolby Atmos sound.

The phone has a Qualcomm Snapdragon 835 processor with eight gigabytes of system memory, or about as much as a Macbook Pro laptop. It also has 64GB of internal flash memory storage, and it has a microSD slot for as much as two terabytes of storage. It has a THX-certified USB-C audio adapter with a 24-bit digital audio converter.

It has a 4,000 milliamp hours lithium-ion battery with Qualcomm’s QuickCharge 4.0, which enables fast recharging. Razer tapped its expertise in Razer Blade laptop engineering for its thermals. Because of that thermal design, the phone stays cooler and is more power efficient than other phones, Lin said.

It also has 802.11 wireless and Bluetooth 4.2 networking. It uses the Nougat 7.1.1 version of the Android operating system. An Oreo update is expected in the first quarter of 2018. 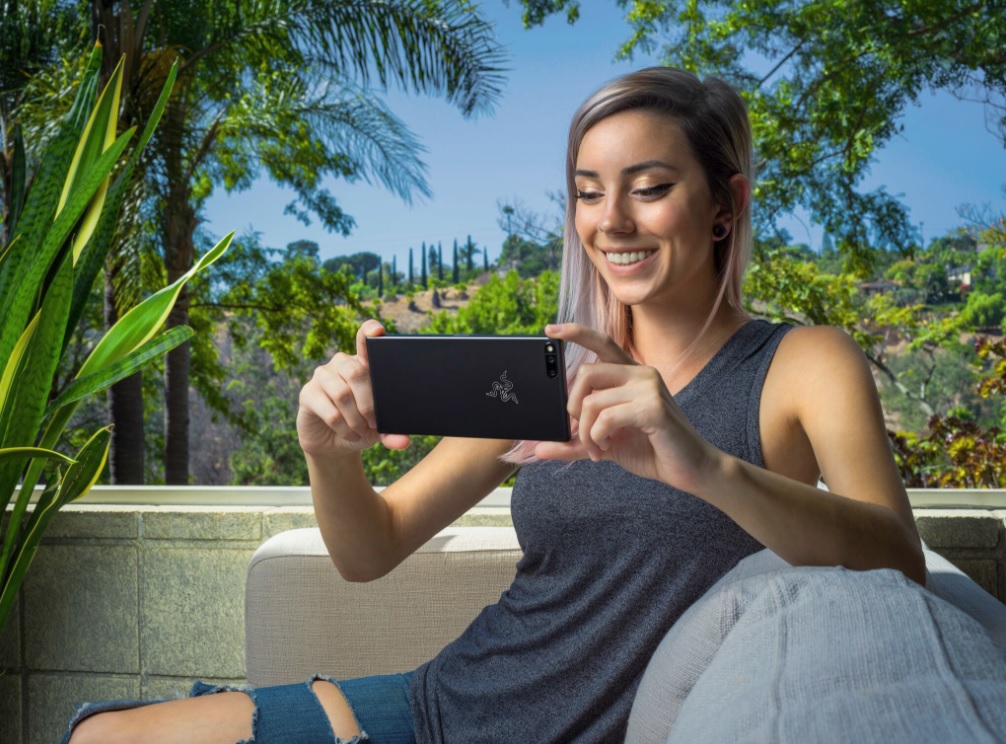 And it weighs 197 grams, or 0.43 pounds, and it is just 8 millimeters thick. The power key on the right hand side of the phone is also a fingerprint sensor for security.

The device has the Nova Launcher Prime with Google Assistant integration, which allows for Android customization. A limited number of phones will be available with the green snake logo on launch day.

Razer has lined up a number of recommended games for the launch. They include Final Fantasy XV Pocket Edition, Tekken, Runescape, Gear.Club, Lineage 2: Revolution, Shadowgun Legends, World of Tanks Blitz, and Titanfall: Assault. These games have been optimized to run fast on the Razer phone.

The preorders are live now. The GSM-only phone will work with AT&T and T-Mobile services. Razer worked on the smartphone with Nextbit.