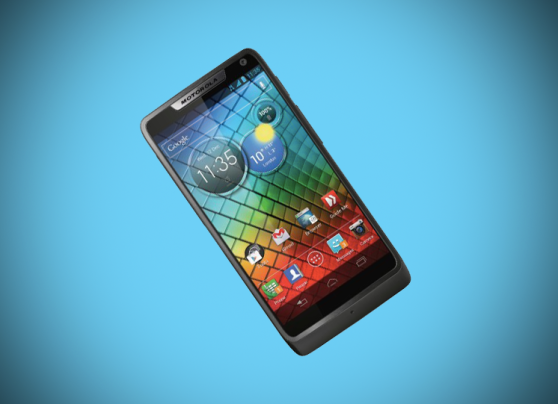 Motorola unveiled the Razr i, its first smartphone to feature an Intel processor, at an event in London today.

If the phone looks familiar, that’s likely because its design was ripped off wholesale from that of the Razr M, which Motorola announced earlier this month.

But the key differences here are internal. The Razr i comes equipped with a 2 GHz Intel Atom processor, which Intel says helps make the phone ideal for taking photos. (Unlike the Razr M, the Razr i features a hardware shutter button, which also helps.)

While some phones from ZTE, Lenovo, and others already run on Intel chips, the Razr i is the first product of the deal Intel and Motorola announced in January. The partnership represents Intel’s strongest effort yet to get its chips in devices with a wide reach and an established customer base.

And make no mistake: Intel needs the deal to work out as it’s playing catch up behind rivals like Qualcomm and ARM in the smartphone market. The company plans a few more devices with Motorola over the next few years, so clearly it’s serious about increasing its stake in mobile devices.

On sale in October, the Razr i will be available in Europe (UK, France, Germany) and South America (Brazil, Argentina, Mexico).