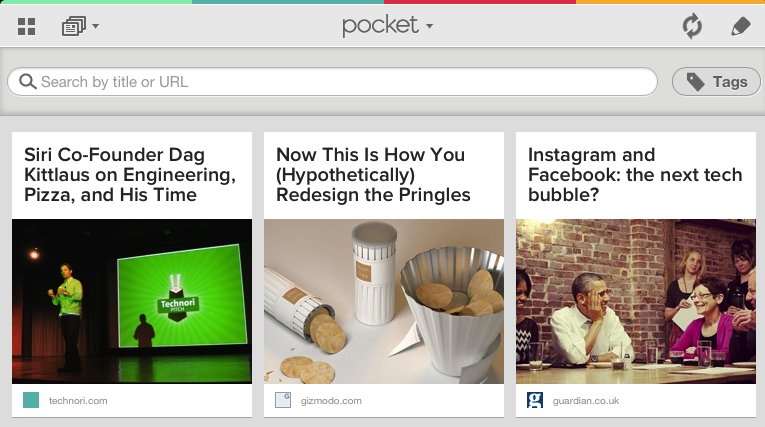 See you later, Read It Later. The bookmarking app for web, Android, and iOS just changed its name to Pocket and launched redesigned versions of its apps.

Read It Later was originally designed to save articles on websites and social media sites to read later, hence the name. I’ve used the app for ages to save articles that I find at work, so I can read them in bed on my iPad or on my public transit ride home.

Despite its original intentions, Read It Later founder Nate Weiner discovered that 40 percent of the content saved with his service consists of videos, recipes, and webpages.

“We are embracing what our users are already doing with the app. People aren’t just saving articles and they don’t need a separate app for watch it later and buy it later,” Weiner told VentureBeat in an interview.

The company wanted to send a clear message that its service isn’t just for saving articles. The name Pocket is meant to convey that you can save anything for later, put it on your mobile device, and take in with you in your pocket. The “Read It Later” buttons in many social and content apps will be renamed “save to Pocket,” which to me just doesn’t have the same ring to it.

To go along with the name change, Read It Later is updating its apps with a different look. Instead of the black and yellow motif I’ve grown used to, Pocket has a beige theme with sea-foam green, teal, coral, and tangerine accents. And like nearly everything these days, the app adopts a Pinterest-like tile view option, which shows pictures from the content you save, if available.

Read It Later’s old interface was hardly problematic, but the new version is smooth and easy to use. You can favorite posts to find them later and bulk-archive posts, two new features. The company also did away with free and paid versions and is offering one free app for Android, iOS, and the Amazon Kindle Fire.

Read It Later and now Pocket, competes with Instapaper, a very similar content bookmarking service. Both Instapaper and Read It Later let you read saved content on your phone or tablet without an Internet connection. Apple’s Safari browser has the Reading List function, which also bookmarks articles and webpages to read later.

The service has gained significant traction, recording 200 million items saved as of March 2012. Weiner threw out the stat that five items were saved every second during our interview. And analytics from the company claim that it’s the second most popular share destination on content curation app Zite, beating out social networks Twitter and Facebook, and its competitor Instapaper.