One of the coolest applications released for the iPhone is Ocarina, an app from Menlo Park, Calif. startup Smule that transforms your phone into a musical instrument. It’s showing up on a lot of year-end lists, both for best apps and best-selling apps. With the latest version, released earlier this week, Ocarina users can record and share their performances.

The app is modeled on the flute-like instrument of the same name, probably best-known to modern users through the video game Legend of Zelda: Ocarina of Time. The screen lights up with four buttons — “holes” that play different notes when you cover them with your fingers and blow into the microphone.

Until now, users could hear what others were playing at the moment across the globe — a very cool concept — but there was no way to preserve and share a particularly memorable performance using the application itself. (Of course, there’s always YouTube.) That has changed with version 1.2, which includes not just a “record” feature, but also a way to download your favorite recordings to your Ocarina home page. 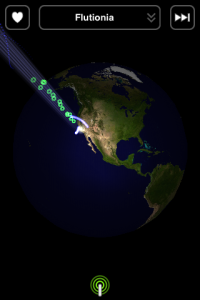 Speaking of YouTube, Smule has also organized a contest for the best videos of people playing Ocarina. Co-founder Ge Wang says he’s been impressed by the variety of ways people use the app — for example, someone decided to play “Music of the Night” (a song from Andrew Lloyd Weber’s “Phantom of the Opera”), as well as other famous melodies … with her nose.

I also had chance to talk to Wang (who pulls double-duty as Smule’s chief technology officer and as a music professor at Stanford) about Smule’s fast path to success. Co-founder Jeff Smith first approached Wang about forming the company this spring. Since, then Smule has raised $1.7 million from Bessemer Venture Partners and already released three iPhone applications that have been downloaded around 1 million times in all.

Particularly with Ocarina, Wang says Smule has been shattering sales expectations. Smule isn’t officially revealing its revenue numbers, but they’re not hard to calculate — Ocarina, for example, has been downloaded about 500,000 times at a price of $0.99 each. With Apple taking 30 percent of the money, that leaves around $350,000 for Smule. Not bad for a single product that’s been on sale for a little less than one month, and for a company that didn’t even exist at the beginning of the year.

As for Smule’s plans, Wang won’t offer too many details, but he says, “The future is Smulian.” There are a lot of people who want to express themselves through music and just need a nudge. “We want to be that nudge,” he says.

That means improvements to existing products, as well as new apps, that involve more interactive audio and more social features. The startup is also interested in developing applications for other mobile devices, although the iPhone still offers the best features to achieve Smule’s goals for now.

If you’re interested in Ocarina, I’d suggesting by buying it now. After tomorrow (Saturday), the price will increase from $0.99 to $1.99.