According to two reports on an Israeli website, Apple, Sony, and Samsung are among the suitors for 3D gesture-sensing company PrimeSense, which provided the technology for the first version of Microsoft’s Xbox Kinect as well the Xtion by Asus and several other products.

For a number of years, PrimeSense looked like the prime challenger for ushering in a new user interface based on physical gestures, and its hardware and software is currently in tens of millions of home gaming systems. The technology is interesting for PCs and mobile devices, important for gaming, but potentially critical to the whole new array of living room smart systems that are hitting the market — like the new Xbox One. 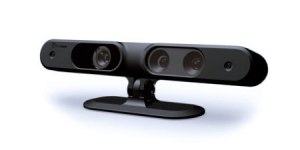 Microsoft’s new Kinect, which is much more sensitive than the first model, doesn’t use the Israeli company’s technology, causing the loss of tens of millions of dollars in royalty payments on a go-forward basis. Leap Motion has developed much more sensitive sensing capability — racking movements of both hands and all 10 fingers at 290 frames per second and detecting movements as small as one-hundredth of a millimeter — and has a signed deal with Asus.

PrimeSense is also working on embedding motion sensing in laptops, but Leap Motion seems to be a step ahead there, too, and has already signed a deal with HP to bring embedded gesture control to PCs and eventually smartphones.

And with no other really hit products in the market right now, the company’s prospects look fairly sub-prime, and it was forced to lay off a quarter of its staff — about 50 employees — over the last year.

Hence the look toward acquisitions. And the company does have a patent portfolio, reportedly, that could be very valuable.

The question is whether Apple, or any other suitor, wants to be seen as picking up Microsoft’s leavings. There’s a reason why Xbox uses different technology, and only part of it is that Microsoft developed it in-house. PrimeSense reportedly does have a new product that is much more precise than its existing products, but the challenge is that the price is more expensive than competing solutions.

One other problem with the report is that a PrimeSense representative “laughed off” the $300 million acquisition rumor, telling TechCrunch “we’re worth 10 times that.” That, of course, could be posturing — it’s hard to see how a 140-employee company that just laid off 50 people is worth $3 billion — but it’s at least an unofficial signal that in this case smoke may not be revealing fire.

Here is an example of PrimeSense’s technology in action: