If you needed further evidence that tablets are more than a mere computing fad, just look at the latest numbers from Strategy Analytics.

The firm found that the tablet industry more than doubled in the first quarter — reaching 40.6 million units, up from 18.7 million last year. This was a significant quarter since we have more than two major companies backing tablet platforms, and consumers have plenty of inexpensive tablets to choose from.

In particular, it’s worth paying attention to Microsoft’s figures. The company is finally on the map in the tablet industry, with 3 million Windows tablets shipped, which includes both Windows 8 and Windows RT (Surface) devices. While that only makes up 7.5 percent of global tablet market share, it’s a notable figure, since Microsoft didn’t even have a tablet strategy last year (we can exclude the handful of Windows 7 tablets nobody bought).

Apple, not surprisingly, is still leading the tablet industry. The company reported 19.5 million iPads shipped for the quarter, up from 11.8 million last year. But Apple should also pay attention to how much Android slates are gaining on the iPad. Strategy Analytics reports that 17.6 million Android tablets were shipped in Q1, up from 6.4 million.

Now Apple and Google are basically neck and neck for the top spot in the tablet world. Android made up 43.4 percent of the global tablet market for the quarter, while Apple held 48.2 percent, falling around 15 percentage points from last year.

For the most part, it was small and cheap tablets like the Nexus 7 and Kindle Fire that helped Android gain so much ground so quickly. At $329, the iPad Mini is still significantly more expensive than $200 Android tablets.

Apple’s big problem? Android tablets will continue to get cheaper and there will be more of them to tempt consumers. Apple, on the other hand, will be stuck iterating the iPad and iPad Mini over the next few years (likely at the same prices).

At this point, it looks like Android will end up dominating tablets pretty soon — something I previously thought would take years to do. 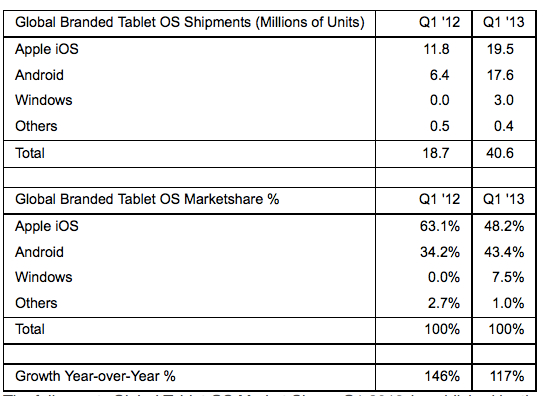