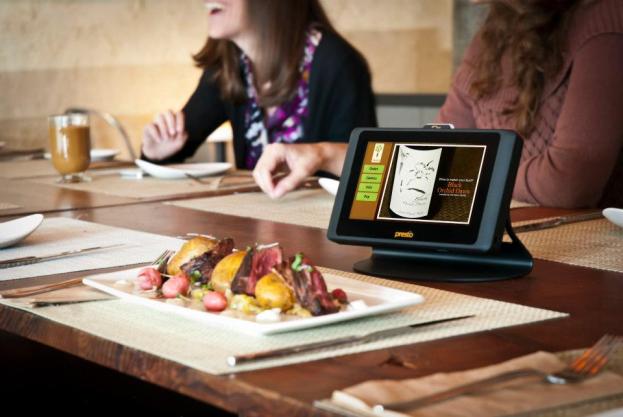 Despite all the innovation to help you find the perfect restaurant, once you’re actually there, you can still expect to be stuck hoping to be noticed by a waiter. And come the end of the meal, there’s also the usual dance around asking and waiting for the check, as well as getting your payment processed.

E la Carte launched two years ago to change that. Today, the company is announcing that it’s raised $13.5 million in a second round of funding to pursue its dream of the perfect restaurant experience.

E la Carte’s Presto tablets sit on restaurant tables and allow you to make orders any time during your meal, as well as instantly check out without waving down a waiter. Restaurants can build visually sumptuous menus for the tablets, which could entice customers more than standard paper menus. E la Carte also offers analytics, so restaurants can get a better sense of how their businesses are performing.

The company claims its tablets have helped restaurants to see a 10 percent sales boost and improve table turnaround time by about 7 minutes. They’ve also led to a nine-fold increase in loyalty program signups, the company says.

“We’re at a point where restaurant owners realize that this [tablets improving the restaurant experience] is happening,” said Rajat Suri, E la Carte’s founder and chief executive, in an interview with VentureBeat. “Some want to be first … Some don’t want to be too far behind.”

Without revealing any specific metrics, Suri said the company has been growing its revenues 35 percent every month for the past year. In the same amount of time, he’s been seeing plenty more interest from restaurants. Its technology is currently being used in restaurants all over the country.

Suri tells me he’s particularly excited about the company’s new partnership with Intel, which led the funding round alongside Romulus Capital. Specifically , he believes Intel will help the company to scale much more easily, thanks to its hardware expertise. The company will also use the funds to improve its technology infrastructure.

While E la Carte’s first Presto tablet was bulky and somewhat clumsy-looking, the latest design shows just how far the company has come. It’s still no iPad, but the 7-inch slate wouldn’t look out of place at a trendy restaurant. At the same time, the tablet is rugged so it can survive life on a restaurant table, and it sports a battery life of more than 20 hours (so it can be left on a table without worrying about power).

As someone who enjoys going out to eat, but is all too often frustrated by the inefficiency of the experience, I’m hoping more restaurants take a closer look at technological ways to streamline their service. Other companies, including eMenu and Displays2Go, are also tackling the space, but at this point E la Carte appears to have the more complete offering.

Suri dropped out of his PhD program at MIT to pursue E la Carte. Back when the company launched, he told me he spent several months as a waiter in Cambridge, MA to better understand the typical restaurant workflow. At the time, he was also pushing the company’s engineers to get some restaurant experience of their own. That real-world experience, coupled with the increasingly polished tablets, could give E la Carte the edge.

The Palo Alto, California-based company has previously raised $4 million in funding from Lightbank*, Reddit founder Alexis Ohanian, SV Angel, and others. The company is a Y Combinator alum and has also received funding from a former Applebee’s executive and execs from other national chains.