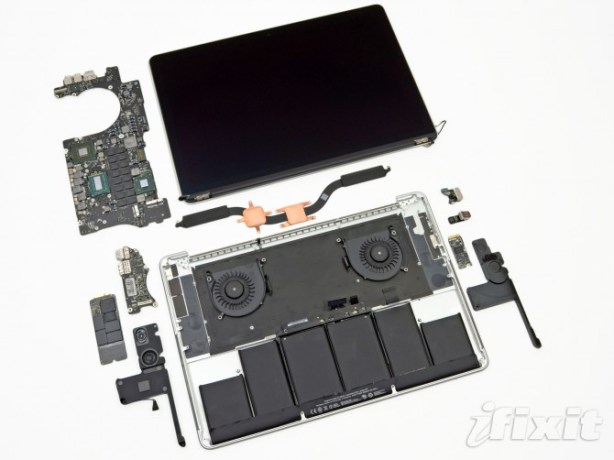 Apple’s new MacBook Pro with Retina Display is ridiculously fast and thin — but you can forget about ever taking it apart.

The repair gurus at iFixit unveiled their teardown of the Retina MacBook Pro this morning, and thanks to its plethora of non-upgradeable parts, they ended up giving Apple’s latest and greatest laptop a dismal repair score of 1 out of 10.

Apple had to squeeze plenty of hardware into the Retina MacBook Pro’s .71-inch thick frame, and just like the MacBook Air, the company had to sacrifice expandability in order to do so. IFixit notes that the new MacBook Pro’s RAM is soldered into the logic board, there’s a proprietary non-upgradeable SSD, and the battery is glued into the case (which means trouble if you ever try to disassemble the computer).

Perhaps the biggest potential issue, iFixit says the entire display assembly is fused, which means you’ll have to replace the entire thing if any aspect of it fails. If you’re not under AppleCare, that will likely be a very expensive repair.

“Laptops are expensive. It’s critical that consumers have the option to repair things that go wrong, as well as upgrade their own hardware to keep it relevant as new technologies roll out,” wrote iFixit’s Kyle Wiens. “On top of being glued together, the new MacBook Pro is virtually non-upgradeable—making it the first MacBook Pro that will be unable to adapt to future advances in memory and storage technology.”

But aside from gadget geeks, I don’t think many consumers will care that this new MacBook Pro is practically impossible to repair. After all, the vast majority of buyers should never have to worry about fixing the computer on their own, and most would rather have a thinner laptop instead of one that catered to tinkerers. I’m a hardware geek myself, but I save my upgrading fetish for my self-built desktop — I don’t mind at all that my MacBook Air is basically a hermetically sealed magic box.