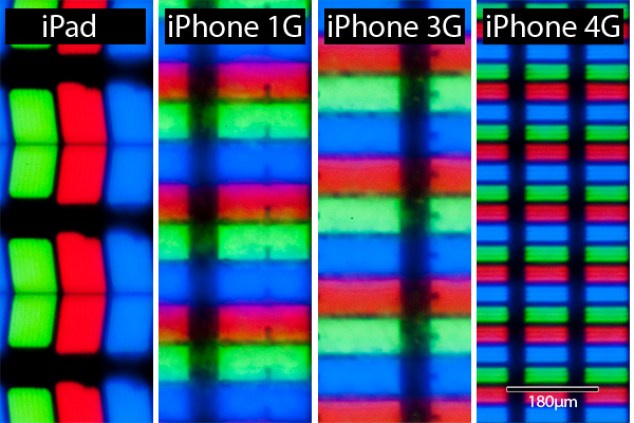 University of Utah’s Bryan Jones isn’t the first scientist to weigh in on the iPhone 4’s Retina Display — Raymond Soneira, a Princeton professor, has previously claimed that it’s false marketing, which Discover’s Phil Plait rebutted —  but he’s the first to put the high-resolution screen under a microscope to test Apple’s claims.

In comparison to previous iPhone displays, as well as the iPad’s, Jones finds that the pixels in the iPhone 4 display are indeed “remarkably small.” They’re also noticeably clearer since iPhone 4 has a bonded glass cover, which eliminates the space between the LCD panel and the glass touch screen. Previous iPhones had non-bonded glass screens, which led to blurriness when viewed under a microscope.

As for Apple’s marketing claims that the Retina Display is higher than the resolution of the human retina, Jones says, “Since the iPhone 4 display is comfortably higher than that measure at 326 pixels per inch, I’d find Apple’s claims stand up to what the human eye can perceive.”

He also goes in depth on why Soneira’s analysis of the display isn’t exactly accurate:

While Dr. Soneira was partially correct with respect to the retina, Apple’s Retina Display adequately represents the resolution at which images fall upon our retina.

Essentially, this is a claim of visual acuity which is the ability of the visual system to resolve fine detail.  There are an awful lot of considerations to take into account when making such a claim such as contrast, distance, the resolution of the display and some metric of pixel size which gives you an estimate of visual resolution on the retina.