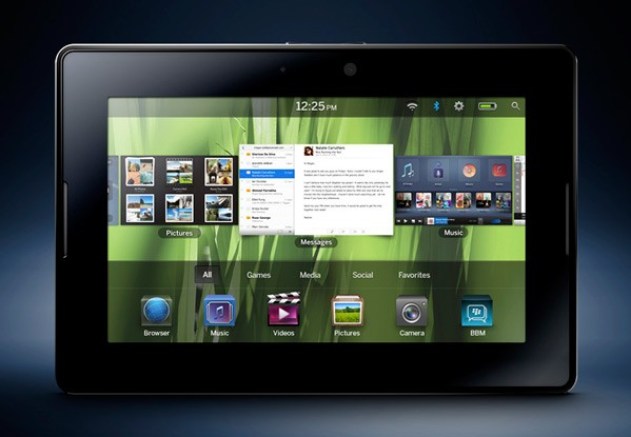 Research in Motion founder and co-CEO Mike Lazaridis hit the stage at RIM’s BlackBerry Developers Conference in San Francisco today, where he unveiled the company’s long-awaited tablet — the BlackBerry Playbook.

He described the device as a “BlackBerry amplified” experience. The PlayBook has a 7-inch display, runs a WebKit browser (the same browser framework used on the iPhone and Android’s browser, not to mention RIM’s BlackBerry 6), and it supports HTML5 and Adobe Flash. Under the hood, it sports a dual-core 1Ghz processor and 1GB of RAM. The Playbook has front (3-megapixel) and rear (5MP) cameras, both of which support high-definition video. It can play back 1080p HD video with hardware acceleration, and it also has an HDMI port to output content to your television. The HDMI output also has the ability to display different content than the PlayBook’s screen, making it ideal for presentations.

As we suspected, the device is running an entirely new operating system from QNX Software (pronounced “kinnix”). QNX founder Dan Dodge said that the software will “enable things that you have never seen before.” Over 230 models of cars are using QNX software, Dodge said, and it’s also used in networking and power grid devices. “We’ve taken the experience from all these industries, and we’ve taken the past year to build this BlackBerry OS,” he continued.

RIM CTO of Software David Yach emphasized that voice is still the “killer app” for mobile phones — but that didn’t stop RIM from creating “Super Apps”, which he describes as apps that are so seamlessly integrated that you won’t know you’re multitasking. “An app tells you the temperature. A Super App integrates with your calendar to tell you to bring an umbrella to Seattle,” he said. The demonstration mainly focused on Super Apps on BlackBerry phones, but it definitely seems like something we’ll see in tablet apps as well.

RIM didn’t offer any exact pricing or release date information for the PlayBook — other than it expects to release the tablet in early 2011.

Given the little we’ve seen, the BlackBerry PlayBook seems like a worthy tablet entry for RIM. It’s inextricably linked to BlackBerry phones, much like Palm’s defunct Foleo project, but it’s done so in a way that actually seems useful to BlackBerry users.