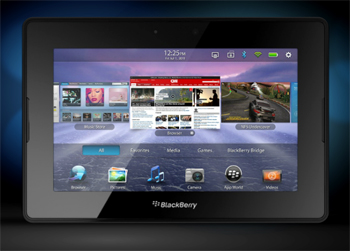 Research in Motion appears to be celebrating the new year with an extraordinary price drop on its struggling BlackBerry PlayBook tablets, with all models now ringing in at $299.

RIM had already cut the price of its 16GB PlayBook model to $199 during the holiday season, but now it is taking the cost cutting further by making its more-expensive 32GB and 64GB models $299. The 16GB model is also listed at $299, but with all model prices the same, there’s no reason not to get the 64GB model. The 64GB model originally retailed at $699 and the 32GB version was $599.

The sale lasts through Feb. 4 and appears to apply to PlayBooks purchased directly from RIM’s online store. Best Buy, which lowered prices on the PlayBook during the holiday, still lists the tablet’s three models at their original prices.

The PlayBook has had an especially difficult time competing with Apple’s iPad, new e-reader tablets from Amazon and Barnes & Noble and various Android tablets made by Samsung, HTC and Motorola. In early December, RIM said it had to write off $485 million and lower its guidance for the year because it couldn’t move PlayBook units.

RIM had a dismal 2011, with its stock price losing more than three-quarters of its value after various blunders, including a disastrous worldwide outage and a long delay on a much-needed PlayBook software update. Hopefully, the major PlayBook sale will mark the beginning of a better 2012.

Are you interested in a $299 PlayBook or is it still too much?