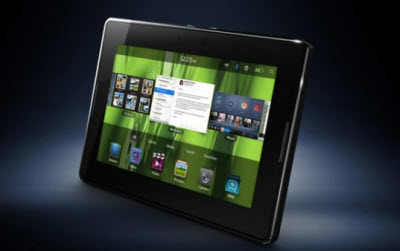 BlackBerry maker Research in Motion had a double dose of news today. It announced that its BlackBerry PlayBook would support Android apps, and it also released financials that included a 36 percent increase in quarterly revenues.

The Canadian company hit its earnings estimates. But RIM’s stock price is down about 10 percent in after-hours trading today to $57.59 a share, presumably because RIM’s outlook was cautious for the current quarter. The company expects revenue to be $5.2 to $5.6 billion — a range that some consider too conservative.

That helps put the launch of the BlackBerry PlayBook, a tablet with a 7-inch screen, in perspective. RIM really needs to hit a home run with the PlayBook, but it will be hard work to make the tablet stand out in a sea of competitors when it launches on April 19 for $499.

The support for Android apps is important, as the QNX operating system on the PlayBook is designed to run BlackBerry Java apps. This means RIM will have access to a wider ecosystem of developers to get content for the Playbook. Since there are more than 200,000 Android apps available, RIM solves the problem of any shortage of QNX apps with the Android support. Right now, there are about 25,000 BlackBerry apps, so the Android addition is huge.

RIM also said it has gained support from two makers of game tools: Ideaworks Labs and Unity Technologies, to enable games based on the engines created by those companies to run on the PlayBook. Mike Lazaridis, co-chief executive and president, said the addition of Android would give users a greater choice of apps and showcase the PlayBook’s versatility.

Developers currently building apps for the BlackBerry or Android platforms should be able to quickly and easily port their apps to the BlackBerry Tablet OS (built on the QNX Neutrino software), thanks to a high degree of compatibility between the applications programming interfaces (APIs). For users, the app players will be optional and will run in a secure “sandbox,” or walled off section of the PlayBook. RIM will disclose more info at its BlackBerry World conference May 3-5 in Orlando, Fla. The tablet will be able to support HTML5 and Adobe Air and Flash apps.

As for the earnings, RIM reported a profit of $984 million, or $1.78 a share, beating analyst expectations. The cautious outlook recognizes that consumers have shifted to RIM’s lower-priced products. RIM also expects to incur new marketing costs as it pushes into the tablet market. The company also warned about potential supply-chain disruption from the Japan quake. For the full fiscal year, BlackBerry shipments were 52.3 million, up 43 percent.

Check out our earlier video demo of the PlayBook in action.