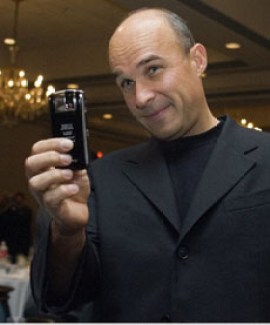 Before Steve Jobs slammed Android in Apple’s fourth quarter earnings call yesterday, he had some choice words for Research in Motion’s new platform and its plans for a 7-inch tablet. Now RIM co-CEO Jim Balsillie has issued a response to Jobs’ criticisms, just like Google’s Andy Rubin and TweetDeck’s CEO before him.

For those of us who live outside of Apple’s distortion field, we know that 7” tablets will actually be a big portion of the market and we know that Adobe Flash support actually matters to customers who want a real web experience. We also know that while Apple’s attempt to control the ecosystem and maintain a closed platform may be good for Apple, developers want more options and customers want to fully access the overwhelming majority of web sites that use Flash. We think many customers are getting tired of being told what to think by Apple.

Jobs had mentioned that 7-inch tablets were too small to create effective tablet apps, and that the iPad’s 10-inch form factor was superior. He went as far to say, “One could increase the resolution to make up for the difference [in screen size], but it’s meaningless unless the thing also includes sandpaper so users can sand down their fingers.”

Balsillie, to his credit, focuses on the fact that RIM’s upcoming BlackBerry PlayBook tablet will have full Flash support, something the iPad will likely never have.

And by the way, RIM has achieved record shipments for five consecutive quarters and recently shared guidance of 13.8 – 14.4 million BlackBerry smartphones for the current quarter. Apple’s preference to compare its September-ending quarter with RIM’s August-ending quarter doesn’t tell the whole story because it doesn’t take into account that industry demand in September is typically stronger than summer months, nor does it explain why Apple only shipped 8.4 million devices in its prior quarter and whether Apple’s Q4 results were padded by unfulfilled Q3 customer demand and channel orders. As usual, whether the subject is antennas, Flash or shipments, there is more to the story and sooner or later, even people inside the distortion field will begin to resent being told half a story.

Apple announced on the earnings call that it had sold 14.1 million iPhones in its fourth quarter, beating out RIM’s reported 12.1 million phones from its August quarter. Balsillie is right to point out that September is usually a strong month for sales, and if that month’s numbers were included, the iPhone likely wouldn’t have won out.