Researchers have been worried about cell phone radiation for some time. That science may or may not be conclusive.

But Ameer Rosic, an entrepreneur in Toronto, isn’t taking any risks with his, uh, balls. He has launched an Indiegogo crowdfunding campaign to create Riparo EMF (electromagnetic field) underwear. So far, he has raised $1,823 Canadian dollars out of a goal of $25,000. That’s $1,602 out of $21,975 in U.S. currency.

“Do you think it’s time to protect your balls,” he asks in his video. “I do.”

The underwear is stitched with silver, cotton, and polyester. It blocks 99.99 percent of radiation emitted by electronic devices, Rosic said. The high silver content in the underwear provides a shield to the electromagnetic radiation. It is stitched so that radiation doesn’t penetrate at the seams.

“Our mission is to protect balls everywhere,” he said in an email. 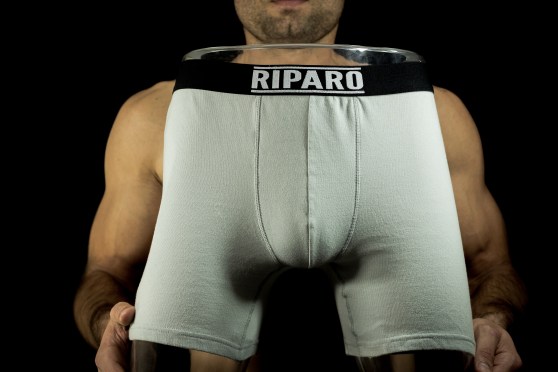 Riparo means shield in Italian. Rosic, a health coach who wants to have a family, said he is also working on EMF material for “your ladies and babies too.” Right now, the company is a one-man show. Rivals include Belly Armor.

Rosic cites supporting claims from physicians including Mehmet Oz, a cardiothoracic surgeon and professor at Columbia University and host of the Dr. Oz Show, as well as Tim Ferriss, author of the 4-Hour Workweek.

Fiona Mathews, a researcher at the University of Exeter in England, found in a study that exposure to electromagnetic radiation lowered sperm mobility in male patients by 8 percent and lowered sperm viability by 9 percent. Other studies are also referenced on Riparo’s Indiegogo page.

Early supporters of the Indiegogo campaign can get a pair of Ripor EMF shielded underwear for $35.