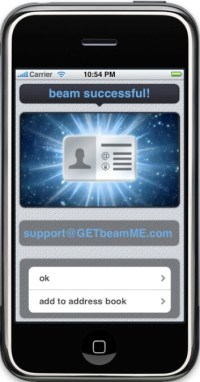 Business card exchange apps have become popular on the iPhone. But Rmbr hopes to set itself apart by selling a paid app, beamME Pro.

It’s going to be a challenge to sell it for the one-time fee of $4.95, since free apps are plentiful. But Gabe Zichermann, chief executive of the New York-based company, is confident that beamME Pro is worth it.

The company launched its free version of beamME in October, and it became the top mobile card-exchange app. It competes with rivals such as Handshake. The app lets you exchange your contact information via text message. The difference in the paid version is that it has no advertising and lets you send more than one type of card — for example, one for business and one for personal contact information.

BeamME Pro also lets you see the history of the people that you’ve contacted, so you can check up on when you met someone, for example. And the app uses the iPhone’s geo-location feature to show the locations of your contacts on a Google Map. You can then build a beamMAP of your contacts. 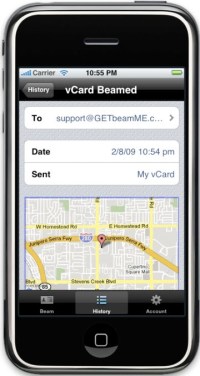 Zichermann is familiar to our readers as a proponent of Funware, or the use of game mechanics in non-game applications. (He’s also going to be part of the panel on Video Game Design Thinking at our GamesBeat 09 game conference on March 24, by the way). He believes that apps should be fun, even if they’re not games, and that beamME Pro is appealing to users who enjoy collecting business or social contacts.

The company isn’t talking about usage numbers yet. But Zichermann notes that when the company staged a competition among users at Macworld in January, usage time per user doubled. Most utility apps don’t garner much fan enthusiasm, since they’re often boring necessities. But Zichermann says one of his users drew pictures of the features he wanted added and sent them to Rmbr.

Zichermann founded Rmbr in 2007 and has raised $750,000 from angels. He has five employees and believes the company has a shot at becoming cash-flow positive from operations in the near future. Part of the company’s strategy is to stay focused on iPhone apps, Zichermann says.

[Update: One of the rivals offering free business card exchange services is Dub.]