Roomkey is one of the contenders that wants to break us free from Zoom with its own kind of mini metaverse. The Roomkey Metaverse is a social event space in which 40 people mingle in a 3D room with animated avatars with voice chat.

On May 27, Roomkey will hold a Social Entrepreneurship Festival with Twitter cofounder Biz Stone as the host in a room where people will hold audio conversations. Stone, who is an investor in Roomkey, will host an invite-only crowd of about 40 people talking about social entrepreneurship during the pandemic. While that’s a small group, it could fill a niche for events where the number of people is less important than who is in the crowd.

Roomkey will also regularly host a dozen shows such as a virtual art gala, weekly breakfasts on entrepreneurship, a talk show on venture capital, a mixer for musicians, meetups about diversity, podcasts, fundraisers, and other topics. The platform looks like a virtual reality experience, but it’s not. You can participate in it through iOS, Android, or the web. First you create a character and then you join an event, so long as you’re invited to join it.

“This is what I hope to bring to the world,” said Roomkey creator Don Stein in an interview with GamesBeat. “There’s a lack of social anxiety as there’s no need to turn on your camera.”

Stein started the company as Teeoh, and he morphed it into Roomkey as he developed technology such as an audio engine. That took a couple of years to get done. Competitors include Clubhouse, which has large audio stages and groups but no animated avatars, as well as Spatial, which has virtual reality and mobile versions.

“This is our first real event for the press, and so we consider [this] our rebranding and relaunch,” Stein said. 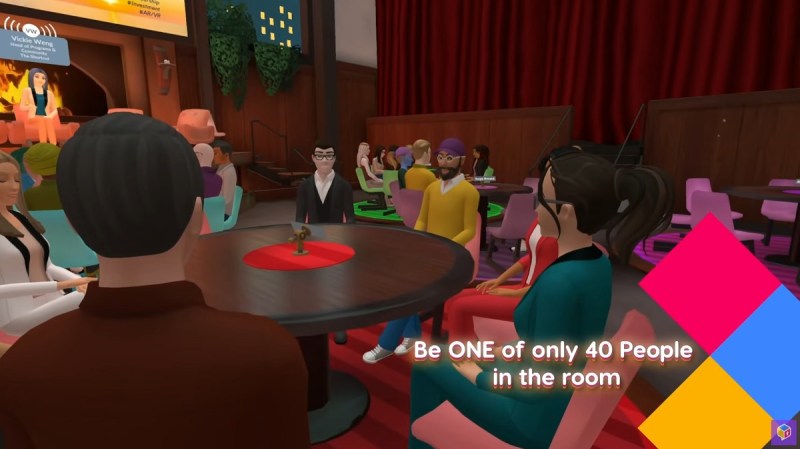 Above: Roomkey lets you chat with other people via audio.

He said that you can mingle with other people without having the problem of worrying about your own appearance. And with a limit of 40 people in the space, Roomkey focuses on intimate gatherings and tries to pack the rooms with high-powered people. If the event warrants it, Roomkey can also stream video of the event to livestream viewers.

He thinks that, as a result of the pandemic, many people have woken up to the importance of socializing with family, friends, and even strangers. The human connection is a vital part of our daily energy and mental health.

Stein said that in a year where Zoom deserves millions of “thank you” letters for keeping us connected, it’s been tough to find those fun moments of serendipity. Usually, they occur at events, in public transport, at bars, and among dinner tables with friends.

Stone will offer his own thoughts on social entrepreneurship during the Roomkey Metaverse event. Stein hopes the event space will help us move into a new normal where we go back to physical events and also attend more virtual events in a new normal. The company has raised $5.3 million and it has 10 employees.