You may remember that the Asics-owned company launched an all-new Apple Watch app last year, promising that it would still track your runs even if you left your iPhone at home. But without GPS on the original Apple Watch, it wouldn’t have been 100 percent accurate. The company didn’t reveal exactly how it managed to track distance and pace, but it was likely a combination of Wi-Fi data and the onboard M8 motion coprocessor. With the new Apple Watch 2, however, that all changed; GPS opens the watch up to a range of new native apps that don’t require an iPhone to work fully. 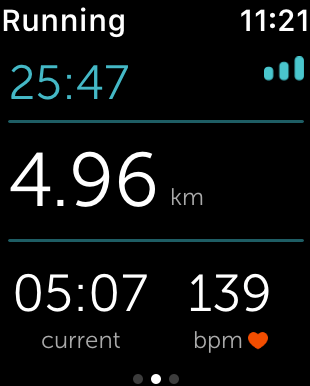 Following a short beta period, Runkeeper is launching its new Apple Watch app to the public today, and it comes with a bunch of new features in addition to GPS support.

For example, it has a customizable activity screen that lets users tap on a specific stat and analyze various metrics during an activity, while a heart-rate graph will also display a snapshot of the last five minutes to show your exertion over extended periods. Additionally, you can set a target pace and view your performance against that target over the past five minutes.

Runkeeper is one of the oldest iPhone apps out there, having launched shortly after the App Store opened for business in 2008. One of the company’s most-requested features was to be able to use service without carrying their phone around, and this was partly achieved last year with the updated Apple Watch app. Now that the app is powered by GPS, it just got a whole lot more useful, but there are still some pitfalls to leaving your phone at home.

For example, serious runners and cyclists are often interested in additional metrics, a key one being elevation — how far they’ve climbed vertically. The Apple Watch can’t track hill-climbs on its own, meaning that many keep-fit geeks will still prefer to have their phone with them.