Samsung has announced a new smartphone that will ship with Tizen, the Linux-based operating system co-developed by the electronics giant. 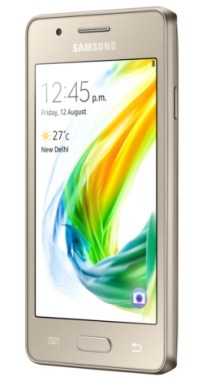 The Samsung Z2 is the first Tizen phone to support 4G, and is also backed by a 1.5GHz quad-core processor, 1GB RAM, and 8GB internal memory (expandable up to 128GB). As with previous Tizen phones, the Z2 will only be available in India for now, starting on August 29 with a ticket price of 4,590 rupees ($68).

The open-source “Android-alternative” operating system has been a core inclusion in Samsung’s smartwatches, cameras, TVs, and the company’s push into the Internet of Things (IoT). But Tizen has hitherto been limited in the smartphone realm to a handful of devices.

Indeed, the Z2 represents the company’s third Tizen-powered smartphone, following the Z1 that launched in India early last year and went on to shift more than one million units, and the Z3, which followed nine months later.

Samsung is continuing to invest in Tizen, but it evidently isn’t ready for prime time in the smartphone realm, as evidenced by the low-to-mid-range devices it has developed so far.

Despite recent reports suggesting that a Tizen flagship is in the works, in an interview with GamesBeat earlier this year, Mihai Pohontu, vice president of emerging platforms at Samsung, told us that the company would be rolling out Tizen phones in new markets but that Android would remain its OS of choice for high-end devices. “Tizen is becoming more important for us — it’s one of the ways we can sell smartphones at very low cost in emerging markets,” he said. “Also, Tizen powers our TVs. It powers our wearables and IoT. It even powers our security solution, KNOX. We’re very serious about Tizen. It’s a wonderful operating system. We’re committed to Android, though. Our high-end handsets will run Android for the foreseeable future.”

That Tizen has now arrived on a 4G phone is a notable development for the operating system, but only time will tell how big a role Tizen will play in powering Samsung’s smartphone ambitions.