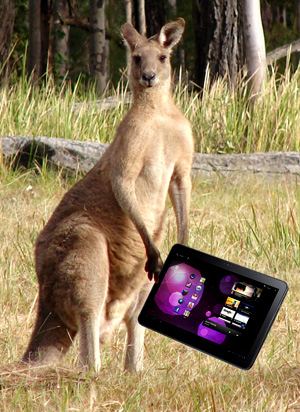 Samsung executives’ moods are no longer down under. Australia’s High Court removed its country-wide ban on the company’s tablet, the Galaxy Tab 10.1, today.

Australia’s court prohibited the sale of the tablet when Apple filed an infringement suit against the Galaxy Tab, a decision Samsung called “grossly unjust.” Apple’s iPad launched in Australia after releasing in the United States. The Galaxy tab shares similarities with the iPad, and can be counted among its biggest competitors. The tablet is a little too close for Apple’s comfort given that Samsung produces chips used in Apple products.

Mobile rivalries are bound to happen, especially when one tablet takes on a very similar look and feel to another. The unfortunate part of the tablet, however, is it’s a tablet. There aren’t a lot of shapes for it to come in. That is, other than the Pyramid tablet sold at Dunder Mifflin in Scranton, Pennsylvania. It’s the internals that really count, and when one company recognizes features they feel are unique to its own tablet, wars are bound to flare.

An angry Samsung stated in November that the judge handling the injunction against the Galaxy Tab didn’t properly look through Apple’s intentions in the suit. Samsung has, however, also filed a similar suit to stop sale of Apple’s iPhone 4S in Australia. A hope for a French ban was recently denied.

The Australian courts have agreed to hear the case in March 2012. The tablet has, however, already been on ban since July. If Apple does flush the Galaxy Tab down Australia’s toilets, maybe we’ll finally find out if the water swirls the other way.