Samsung’s second-generation Galaxy Watch Active may hold a record for the most repeatedly and thoroughly leaked wearable device in history, as virtually every image and detail hit rumor sites well in advance of the official announcement. But the company made the Galaxy Watch Active2 official today, and — as expected — it’s a nice upgrade from the last model, featuring a new rotating touch bezel and two size options.

Both the 40mm and 44mm versions of the Active2 will come with circular 360 x 360 Super AMOLED displays, the former 1.2 inches and the latter 1.4 inches in diameter. Each will gain an edge-of-screen touchable bezel that can “rotate” clockwise and counterclockwise like the full-sized Galaxy Watch’s, along with the standard central touch screen area, all covered in Gorilla Glass DX+.

Samsung will offer the Active2 in three aluminum colors — silver, black, and pink gold, bundled with plastic straps — as well as three similar stainless steel colors, including leather straps. The aluminum versions are being pitched as “lightweight” at 26 to 30 grams, compared with the “premium solid stainless steel” at 37 to 44 grams. 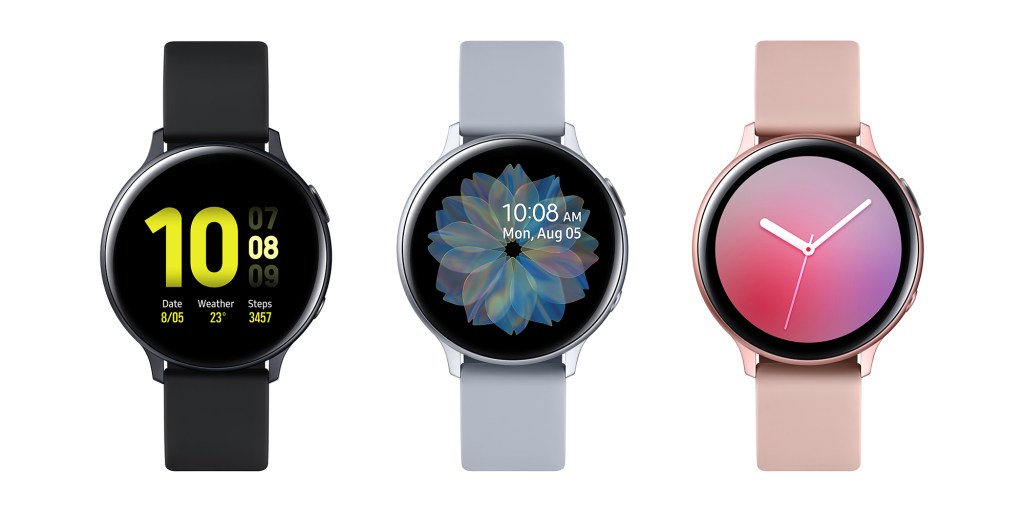 On the software side, Active2 will include a face customization feature called My Style that uses the Galaxy Wearable app to snap a photo of your outfit and extract the color, applying it to your choice of five different watch face patterns. Styles can be saved for future use. A Watch Camera Controller will serve as a remote for the cameras on S9, Note9, and S10 series phones. Samsung also says the Active2 has faster health sensors — eight heart rate diodes, plus ECG — that work in combination with an updated running coach to more quickly track common workouts.

It’s worth noting that the original Galaxy Watch Active was unveiled at Samsung’s Galaxy Unpacked event less than six months ago, making Active2 seem like a somewhat rushed sequel. But the new models will present a stronger challenge to Apple’s upcoming Apple Watch Series 5, which is expected to be unveiled along with new iPhones in September.

Bluetooth versions of the Galaxy Watch Active2 will start at $280 (40mm) and $300 (44mm) and will hit stores on September 27, with preorders kicking off September 6. Using Samsung’s website to preorder will score customers a free Wireless Charger Portable Battery. LTE models will be available through the top five U.S. carriers on September 27, at prices yet to be announced, and solely with stainless steel cases.