Samsung is officially saying goodbye to the “Gear” smartwatch brand in favor of a new name — Galaxy Watch. And as it announced today at its Unpacked event in New York City, its latest wearable includes some noteworthy improvements to the two-year-old Gear S3 lineup, even though it’s a largely evolutionary update.

The Galaxy Watch strongly resembles the Gear S3 Classic, Samsung’s prior model, but appears to be following the Apple Watch’s design leads to appeal to a larger number of customers. Beyond coming in rose gold, silver, and midnight black colors, it can be had in two sizes — the prior Gear S3 size is now called “46mm” and will start at $349.99, while a smaller-sized model is called “42mm” and will start at $329.99. Both will be available starting August 24, solely in the specific size and color configurations shown below. 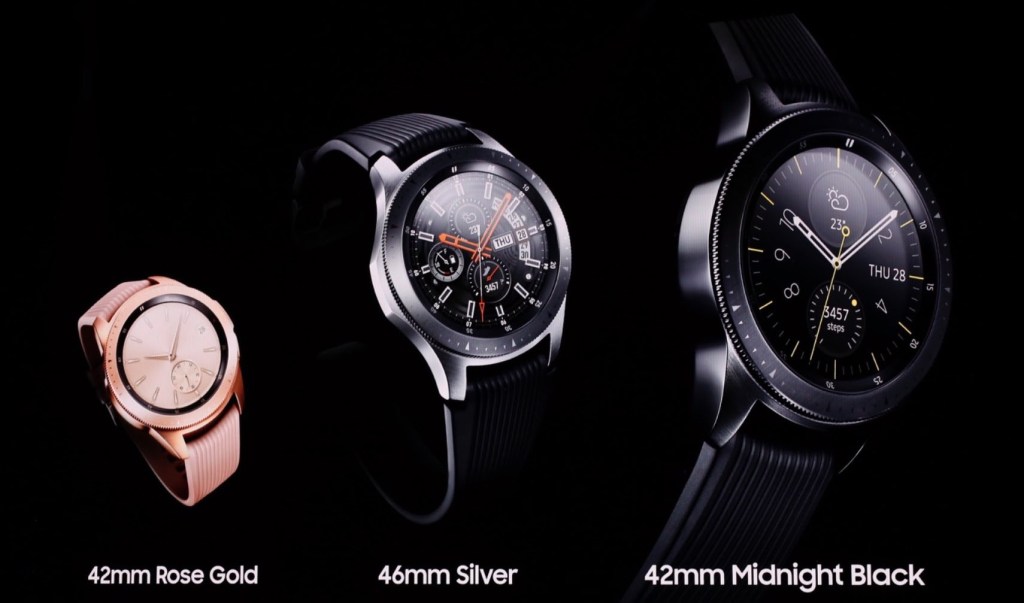 Size comparisons against the rectangular 38mm and 42mm Apple Watches aren’t exactly apples-to-apples, though, as Samsung has preserved the Gear’s circular shape, which looks less blocky on a wrist. The 46mm Galaxy Watch preserves the Gear S3’s 46mm height and 49mm width, but is a hair thicker at 13mm with a 63-gram weight. For smaller wrists, the 42mm model is 41.9mm by 45.7mm by 12.7mm, weighing 49 grams without a strap.

One surprise is that Samsung is keeping the screen resolution the same between both watch sizes. Each version includes a full-color, always-on AMOLED screen with 360 by 360 resolution, but there’s a smaller 1.2-inch display in the 42mm Galaxy Watch, versus a 1.3-inch screen on the 46mm model. By comparison, the 38mm Apple Watch currently has a 1.5-inch screen with a 272 by 340 resolution, and the 42mm Apple Watch has a 1.65-inch, 312 by 390 resolution screen, though those numbers are expected to change for the upcoming Apple Watch Series 4. 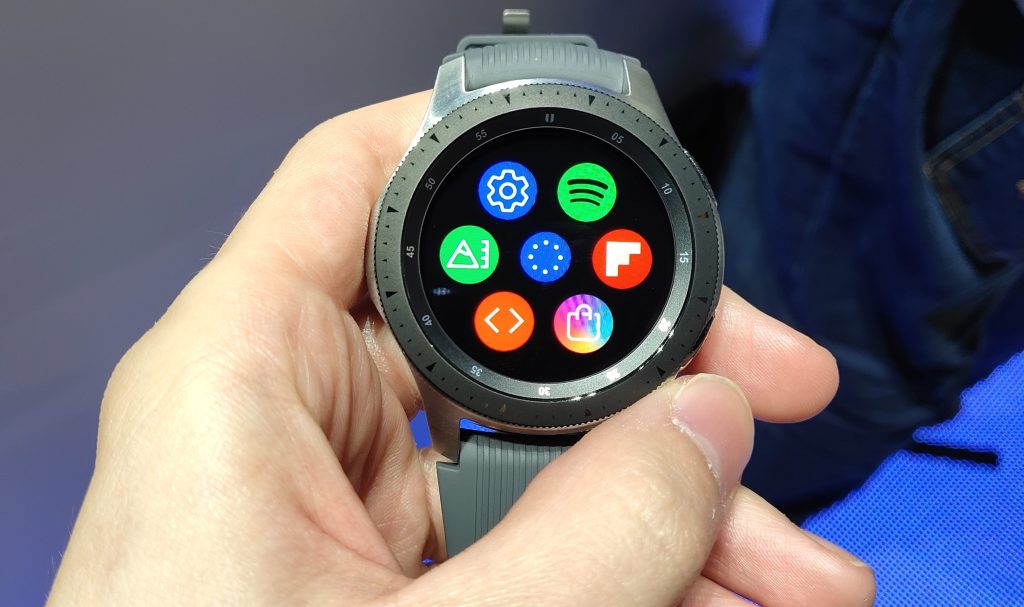 A disappointment in the new model is a reduction in its payment capabilities. The Gear S3 included both NFC and swipe-style magnetic secure transaction (MST) support to enable a wide array of Samsung Pay wireless purchases, but the Galaxy Watch drops MST support and only works with NFC. Not surprisingly, however, it does support Bluetooth 4.2 and 802.11b/g/n Wi-Fi.

The two Galaxy Watch sizes will use different watch bands. While the 46mm version will continue to use 22mm interchangeable bands, with the option of Onyx Black, Deep Ocean Blue, and Basalt Grey colors, the 42mm version will use 20mm bands — Onyx Black, Lunar Grey, Terracotta Red, Lime Yellow, Cosmo Purple, Pink Beige, Cloud Grey, and Natural Brown to start. Samsung says that customers who order the Galaxy Watch through Samsung.com before September 8 will receive a free Samsung watch band.

While continuing the use of a Tizen operating system from the Gear S3, Galaxy Watch packs a more powerful dual-core Exynos 9110 processor running at 1.15GHz. As was the case with the Gear S3 Frontier, the Galaxy Watch is available in Bluetooth-only and LTE versions, now promising LTE support across over 30 carriers in more than 15 countries.

The Bluetooth model will include 768MB of RAM, while the LTE model will have 1.5GB of RAM; both will have 4GB of storage space. Samsung says that the LTE Galaxy Watch is able to operate fully independently in LTE mode, without needing to connect to a phone such as the just-announced Galaxy Note 9. Unfortunately, Samsung lists the release date for the LTE model only as “later in 2018,” and hasn’t announced a price, but is promising support from all four major U.S. carriers. 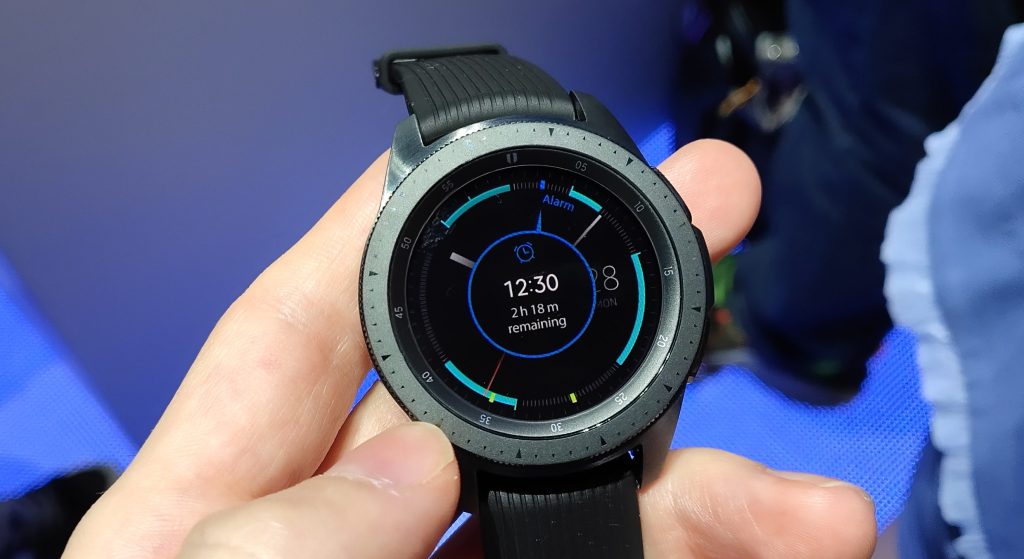 Galaxy Watch will also include new software features. A new home screen will provide a daily briefing synced to your calendar, including appointments, taken from an Android device running Android 5.0 or later or an iOS device running iOS 9 or above.

For workout fans, the Gear S3 included a barometer that could provide “about to rain” notifications, GPS, speedometer, and SOS emergency mode. The Galaxy Watch now features 39 workout modes, compared with 10 in the prior model. It can also track sleep and begin tracking six specific types of workouts automatically. “Connected Health” features include a stress management tool that can help you calm down if your heart rate rises.

On stage, Samsung promised that the Galaxy Watch can be used for “several” days between charges; a subsequent press release said that it’s actually “up to 80+ hours with typical usage” on the 46mm model, which has a 472mAh battery, versus “45+ hours” from the 270mAh battery of the 42mm model. Each model promises at least twice the longevity “with low usage.” Additionally, the Galaxy Watch will be capable of recharging using Samsung’s new Wireless Charger Duo, a phone and watch charging pad that leaked well before the show.

The Galaxy Watch is entering the market just ahead of what should be a competitive holiday season. Apple reportedly plans to announce an improved Series 4 version of the Apple Watch with larger screens in September. Qualcomm has said that it will host an early September event to unveil a new smartwatch-focused processor alongside a flagship device from an unnamed vendor. Google, Fitbit, and Xiaomi are all likely to have new options in the not-too-distant future.