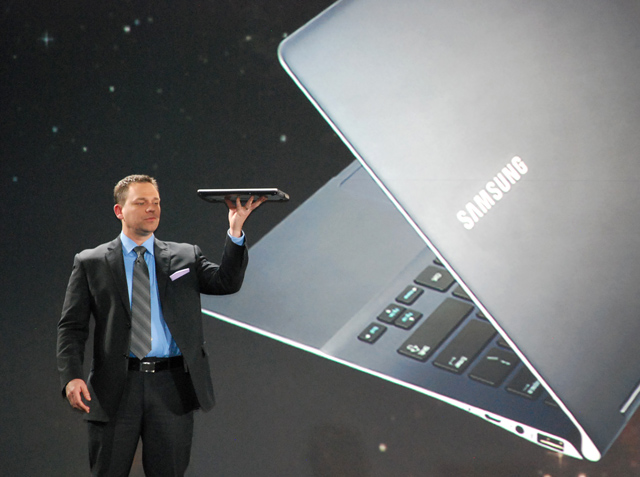 Samsung was one of the early adopters of the ultra thin-and-light laptop craze, with its first Series 9 laptop that came out early last year. At $1,650, the cost of the original Series 9 was hard to justify compared to a slightly cheaper Macbook Air. But with this new generation Series 9 notebook, the company packs even more power and speed into a thinner body to make it more worth the high price tag.

Samsung claims the new Series 9 took 30,000 hours of development and design to get it to where it is today, and it will offer a 13-inch model and a 15-inch model. The updated Series 9 (being held in the above photo) measures a half-inch thick and weighs 2.5 pounds. The design features an aluminum body with a sandblasted surface that prevents fingerprints, and a backlit keyboard.

The Series 9 has a 1600-by-900 resolution screen, 128 GB SSD hard drive, Intel Core i5 processor, approximately 6 hours of real battery life (up to 10 hours max), and any traditional ports (USB, HDMI, etc.) you can think of. The company claims it can boot-up Windows 7 in just 9.8 seconds.

On top of the Series 9, Samsung also used its high-profile CES spot to debut the Series 5 Ultra, a still-powerful but much more affordable version of its ultra-thin laptops. The Series 5 Ultra will come in 13-inch and 14-inch editions. All variations will measure less than an inch think and weigh less than four pounds.

For specs, the Series 5 Ultra features a 1600-by-900 high-resolution screen. The design will include multiple USB ports, an SD memory card slot, Ethernet port and as a built-in optical drive in the 14-inch model. It will come with two internal storage options — a 128 GB SSD or 500 GB drive with 16 GB ExpressCache memory.