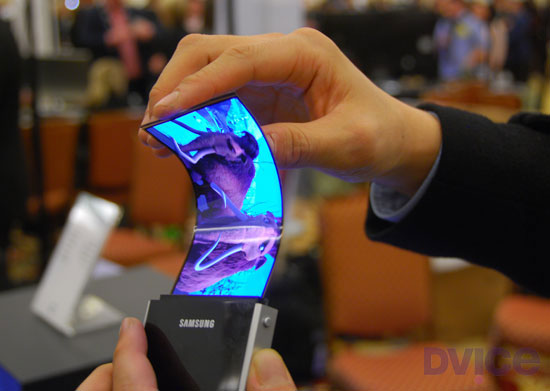 In its quarterly earnings call, Samsung’s vice president of investor relations, Robert Yi, told investors, analysts and press, “The flexible display we are looking to introduce sometime in 2012, hopefully the earlier part. The application probably will start from the handset side.”

After flexible-screen mobile phones roll out, the company plans to introduce the same technology for tablets and other devices.

In January 2011, Samsung purchased Liquivista, a strategic acquisition that will allow it to produce the kinds of displays that were announced today. Liquivista made electrowetting display technology, which is used to create mobile and other consumer electronic displays that are bright, low-power, flexible and transparent.

Flexible screen technology was also a focus of Samsung’s in March, when Yongsuk Choi, director of Samsung Mobile Display, gave an overview of the company’s future mobile device plans. At that time, Choi said most of the flexible-display technology Samsung was working on was still in very early stages.

Flexible displays have been on the fringes of up-and-coming mobile technologies for some time. For example, we saw a bendable e-reader from Plastic Logic back in 2008.

More recently, Sony, in particular, has shown some interesting work in the field, demonstrating its first flexible display at CES in early 2009 and showing off advanced, thinner, more flexible displays just last year.

Still, flexible screens aren’t something we’re seeing on the mass market yet; we wonder if consumers will warm to the idea when Samsung takes the wraps off these new devices.