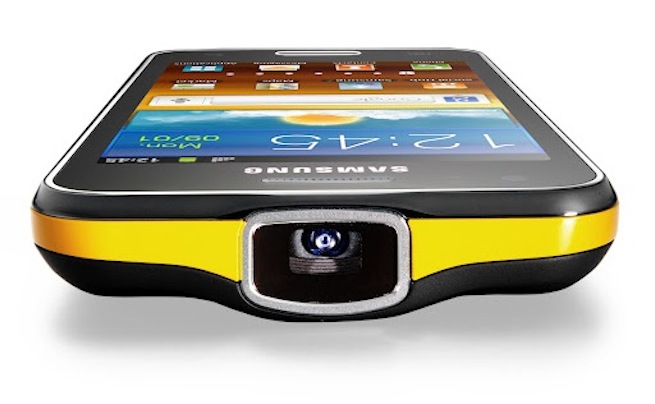 Samsung released its new smartphone, the projector-ready Galaxy Beam, in the U.K. today.

The company first showed off the Galaxy Beam at Mobile World Congress back in February. The smartphone, which runs Android 2.3 Gingerbread, rocks a 4-inch display, a 1 gigahertz dual-core processor, and an ugly yellow band around the sides. Of course the phone’s most notable feature is its powerful built-in projector, which allows you to project an HD-quality screen of up to 50-inches wide at 15 lumens.

As VentureBeat’s Devindra Hardawar previously pointed out, the Galaxy Beam seems like something Samsung would have come out with over a year ago. I can see how a phone like this would be useful for people who are frequently giving presentations at corporate meetings where they need to show off spreadsheets, outlines, and marketing materials. And while I think having a built-in projector on a smartphone is a pretty cool addition, I don’t see this as being that big of a deal to the majority of consumers. The Beam seems more novel than useful. That said I’d rather have the latest version of Android than a projector.

Samsung hasn’t released a date for when the Galaxy Beam will launch in the U.S.