The year is young, and Samsung has come out swinging. In advance of CES 2014, the tech giant has offered up a glimpse of a few new gadgets it has for coming year.

Of particular note is the decidedly different Galaxy Camera 2, which follows its predecessor’s attempt to fuse the smartphone and the point-and-shoot camera. The Galaxy Camera 2 packs a 16.3-megapixel CMOS image sensor, 21x optical zoom, and a pop-up flash. That’s coupled with a 4.8-inch touchscreen, Bluetooth 4.0, Wi-Fi, and NFC connectivity: The specs are largely identical to the first iteration, though there’s no mention of the 3G and 4G service options its predecessor offered. The camera can also shoot 1,920-by-1,080p HD video and shoot slow-motion video at 120 frames per second. 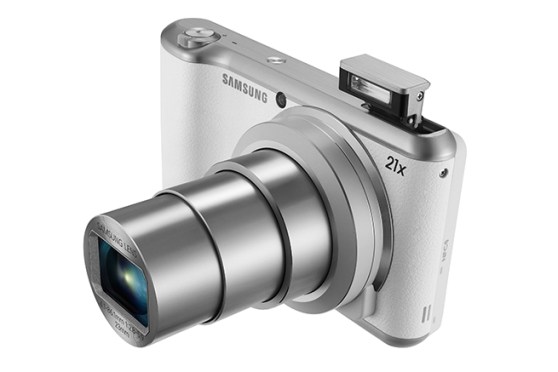 Above: The Galaxy Camera 2 is easy on the eyes, too.

The new iteration of the camera adds 28 “Smart Modes,” preset shooting modes that promise to take some of the effort out of getting the perfect shot. The Smart Mode Suggest feature simplifies things further by analyzing a scene and suggesting a shooting mode for you. It even has a mode dedicated to capturing the perfect selfie, if you’re into that. You’ll be able to edit photos directly on the camera and pair it with a smartphone to send photos automatically or use your phone as a remote viewfinder.

The Galaxy Camera 2 runs Android JellyBean 4.3 on a 1.6-GHz processor and 2GB RAM. It’ll have 8GB of internal storage, with support for an additional 64GB of storage from MicroSD cards. We’ll have to wait until the camera is shown off at CES next week for details on the release date, or the price.

Samsung is also expanding its Shape multiroom audio system. It launched in October as a flexible wireless speaker system, featuring the $400 M7 speaker that could stream audio wirelessly from Samsung televisions and through supported music services from a smartphone app. Add the standalone Hub and you can connect multiple M7 speakers around your home network. In 2014, the Shape family gets a wireless soundbar and subwoofer as well as the smaller, cheaper M5 speaker. There’s no word on what any of the products will cost, but the fully fleshed-out family of audio products is a clear shot at the likes of Sonos, whose products typically earn praise as lofty as their prices.