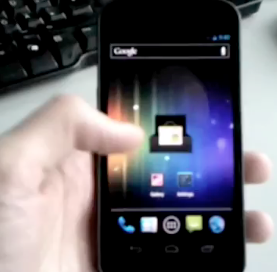 A video of Google’s flagship smartphone, the Samsung Galaxy Nexus (a.k.a. the Samsung Nexus Prime), has leaked online — showing off not only the device, but also a preview of how the latest version of the Android operating system, Ice Cream Sandwich.

The 88-second video shows off the phone’s app library, widgets, locking and unlocking mechanism and camera display. As for the operating system, Ice Cream Sandwich seems like a smooth experience that’s more unified than the previous Honeycomb version.

The official debut of both the Galaxy Nexus phone and Android Ice Cream Sandwich has been pushed back by Samsung. The two were originally scheduled to make an appearance Oct. 11 at the CTIA event in San Diego, but the latest word is that they will now debut Oct. 27.

Check out the leaked video of the Samsung Galaxy Nexus embedded below.