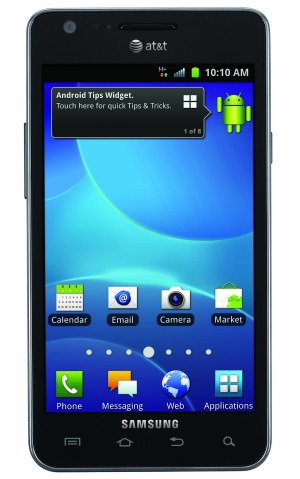 It’s hard to get too excited over the announcement, as images of the devices were already leaked online over the weekend, and there are no release dates other than a vague “fall” release.

On AT&T and T-Mobile, the phone will retain its Galaxy S II name, but it will go as the Epic 4G Touch on Sprint. The AT&T Galaxy S II sports a 4.3-inch Super AMOLED screen, while both the T-Mobile and Sprint versions have 4.5-inch screens. All of the phones pack in a 1.2 gigahertz Samsung dual-core processor, 2-megapixel front-facing camera and an 8-megapixel camera on the back that can capture 1080p video.

Samsung says that the phone records HD videos at higher bitrates than any other phone. All of the phones run the Android 2.3.4 Gingerbread OS bathed in Samsung’s latest TouchWiz Android interface.

The Galaxy S II will also feature access to Samsung’s Media Hub, which will allow you to purchase content from the phone and store content licenses online. The latter feature will let you watch content purchased on the phone from any other Media Hub device, like Samsung computers.

Samsung will also include a few nifty features in the phone like voice commands, which let you shout commands at the phone even while it’s asleep on your desk, and Samsung Kies, which will allow you to get access to files on your phone from other devices on the same network.

Noticeably absent was a Verizon version. As we reported last week, Verizon opted out of offering a Galaxy S II device at launch. But a more recent rumor points to Verizon getting the Droid Prime (formerly the Nexus Prime), an even more advanced Samsung phone running Android 4.0, this October.