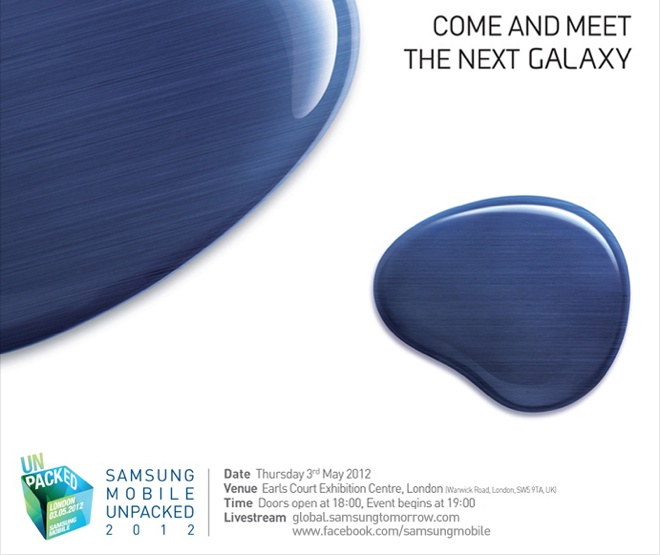 After months of rumors about the Galaxy S III smartphone, Samsung has finally sent out press invites for a London event on May 3, asking attendees to “Come and meet the next Galaxy.”

There’s a hint of Apple coyness to the invite, and some are already speculating if Samsung will go with a different naming scheme for the Galaxy S III. But given the power of its flagship Android brand, I don’t think Samsung will pull anything akin to the “new iPad” reveal.

Samsung has its work cut out for it this time around. The company launched the original Galaxy S on the top four carriers in the U.S., which quickly led to it becoming the top Android handset. But now Apple’s iPhone is on AT&T, Verizon, and Sprint, as well as more carriers internationally, so Samsung is going to have stiffer competition with the next iPhone.

Most recently, we’ve heard that the Galaxy S III could sport a huge 4.8-inch screen (bigger than Google’s flagship Galaxy Nexus) as well as a ceramic case and quad-core processor. The phone could be as thin a 7 millimeters, and is expected to feature updated cameras as well. By this point, it’s a given that it will sport Android 4.0 and LTE connectivity.