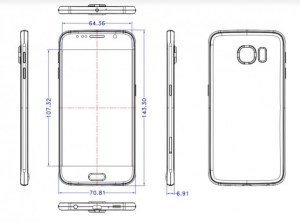 Above: An early leaked schematic of the Samsung Galaxy S6 phone.

Samsung, you may have noticed, isn’t quite as good as Apple at keeping the lid on the details of new marquee products prior to launch.

Over the past few weeks, leaks have come pouring out of Asia about two new Samsung phones that the Korean tech giant hopes will bring some mojo back to its mobile devices business.

Odds are that Samsung will release the much-discussed Galaxy S6, and another phone called the Galaxy S6 Edge that has three separate screen panels on the front, at a March 1 event at Mobile World Congress in Barcelona, Spain.

So far, leaks suggest that the Galaxy S6 and S6 Edge will run on the Samsung Exynos processors, will have 3GB of RAM and 32GB of internal storage, and will run Android 5.0.2 Lollipop. Both will have a stripped-down version of Samsung’s TouchWiz Android overlay interface. 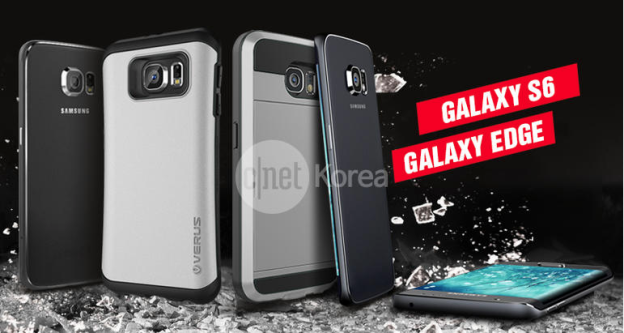 Above: This leaked photo seems to show several S6s, and a Galaxy S6 Edge laying on its back on the right. Notice the curves at both sides of the screen.

Both phones will be made of metal, Bloomberg reports. And both will sport a whopping 20-megapixel rear camera and 5-megapixel front camera, according to a new leak published by Sammobile Wednesday.

The S6, at least, will have a noticeably iPhone-like design. It’ll also have a heartbeat monitor on the back and a newly designed fingerprint reader on the front.

A leaked schematic shows that the S6 is 6.91 mm thick — same as the iPhone 6. It’s still unclear how thick the Galaxy S6 Edge will be; it presumably will need more thickness to account for the curved screen on its front.

Curved screens the ‘next big thing’?

The new S6 Edge phone is interesting from a strategic point of view.

Bloomberg reports that that phone is has a three-sided display — a large front display with two smaller panels curving over the sides of the phone. 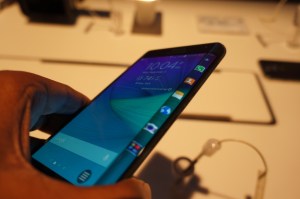 Above: The Galaxy Note Edge, with its extra screen panel sloping down from the side of the front screen, may be the forerunner for the new Galaxy S6 Edge.

The curved screen is not a new concept for Samsung. The company released a phone called the Galaxy Note Edge last year that featured such a curved screen on one side. The idea is that the extra strip of screen real estate moves independently from the rest of the display, and can be used as another panel of content in certain apps, or to help the user multitask. Analysts said that while the Note Edge didn’t break any sales records last year, it sold better than expected.

The new Edge phone will simply take the concept further, hopefully allowing the user to organize content on the phone more easily.

Smartphone makers, like all consumer tech makers, must find new reasons for consumers to ditch their old devices and buy a new one. Samsung hit a homerun (for both itself and Apple!) when it figured out that people wanted more screen room for video, shopping, and browsing.

But everyone is now selling larger phones, so Samsung needs to find the next big thing. And it looks like Samsung is thinking that multi-sided screens might be it. Developing new display technologies is a Samsung forte, so it makes sense that it would try to leverage touchscreen advances to sell more devices. 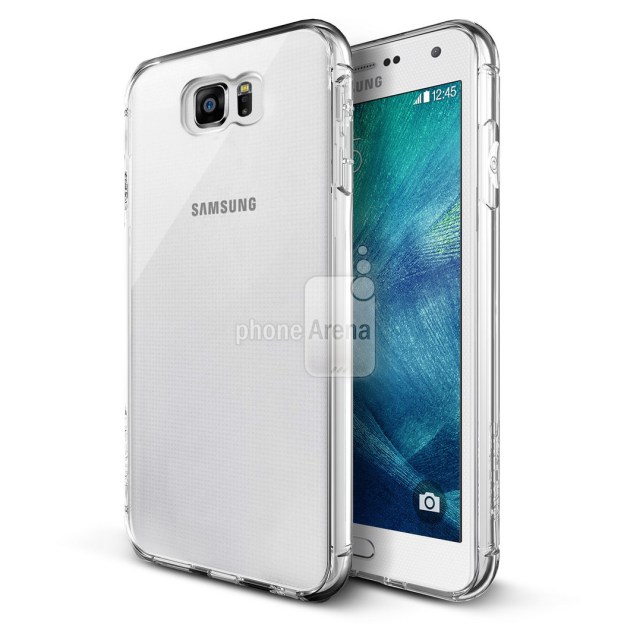 Above: This leaked photo shows the S6 in a plastic protective case.

The question, of course, is whether or not mainstream smartphone users will find the multi-sided screens useful in everyday life. And a lot of that depends on Samsung. We’ll be paying special attention to the new TouchWiz interface and how well it’s able to utilize the extra two screen panels.

If Samsung has found a way to make certain apps on the phone exploit the new screen technology in compelling ways, consumers might start to like the idea.

If this happens in big numbers, Samsung may have found the next big wave upon which its smartphone business can ride for another couple of years.