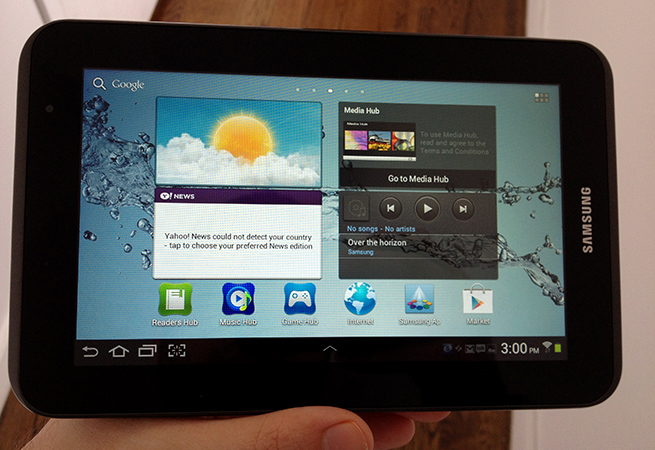 With Android 4.0 software, a sturdy build, and an eye-popping price, Samsung’s just-announced 7-inch Galaxy Tab 2 has just become the best $250 Android tablet on the market.

Samsung was the first manufacturer to take a stab at releasing a legitimate Android-based iPad competitor when it debuted the first 7-inch Samsung Galaxy Tab in September 2010. But that device was, at best, an experimental half-baked product that inspired others to make Android tablets. The first Tab used Android software that wasn’t optimized for tablets and cost an embarrassingly high $600 without a wireless contract.

A year later, Samsung did a much better job with the Tab’s 7-inch successor, the Tab 7.0 Plus. That model included Android 3.2 Honeycomb (which actually worked for tablets), a faster 1.2-GHz dual-core processor, and a more reasonable $400 price. But with the iPad costing only $100 more, many serious-minded tablet buyers ponied up for the iPad because its apps were far and away better than Android tablet apps.

But now, Samsung’s third serious try at the 7-inch tablet has succeeded in a big way. The Tab 2 7.0 shows that Samsung has learned the most important lesson: price wins. With consumers going crazy for those crappy $99 HP TouchPads in last summer’s fire sale and then Amazon’s seemingly successful introduction of the $199 Kindle Fire during the holidays, it was clear consumers love cheap tablets. They like the iPad more, but they see the $500 base price as too much. Now you can get the iPad 2 for $400, but that’s still a tad high for a device that can’t completely replace your computer. (Sorry Harry.)

So does the $250 device feel cheap, you ask. Actually, no. The Tab 2 feels great in the hand if you like the feel of 7-inch tablets. I’m more partial to 10-inch models, but I’ve met some users (mostly women) who prefer the 7-inch form factor because it’s lighter and feels good in horizontal use. The construction of the device, like many Samsung products, is excellent with a hard plastic back. It feels much more expensive than, say, the Kindle Fire.

On the inside, the device includes 8GB of internal storage, a 1-GHz dual-core processor, 1GB of RAM, an IR blaster, a VGA front-facing camera, and a 3-megapixel back camera. If you need additional storage for media, there is a microSD card slot that takes up to a 32GB card. The device is Wi-Fi only, so no hopping on 3G or 4G networks, but it had to be Wi-Fi-only to keep the price down.

The display is easily the weakest link on the Tab 2 7.0. Now that the iPad has a Retina Display, looking at screens without that kind of clarity hurts a bit. But if you’re fine with a passable 1024-by-600 resolution screen for watching videos and surfing the web, you’ll like it.

Preinstalled apps on the Tab 2 7.0 include Netflix, Smart Remote, YouTube, ChatOn, and various other Google services. You also get 50GB of Dropbox cloud storage free for one year, and after that, it drops to 5GB free forever. The Tab 2 includes a link to the Android Market, but that automatically turns into the new Google Play store when accessed. Play, much like iTunes, gives you links to all kinds of music, movie, book, and app downloads.

Finally, you’re wondering, is the device a better buy than the Kindle Fire or Nook Tablet, the best of the cheap tablet bunch? On first impression, my gut says yes, this is the best cheap Android tablet. The Kindle Fire is $50 less, but the hardware feels cheap, and it only has access to Amazon’s Android apps rather than the much better Google Play. Android 4.0 (Ice Cream Sandwich) gives you more features and makes the device more fully realized as well. And I prefer using a more traditional Android build (Samsung uses the TouchWiz skin) over the Fire and Nook’s interfaces. If you’re tied to Amazon or Barnes & Noble content, you can just download their Android apps through Google Play and use the Tab 2 like an e-reader.

Pre-orders on the Tab 2 7.0 start tomorrow. It will be available in stores and online on April 22.

Check out more photos of the device below: