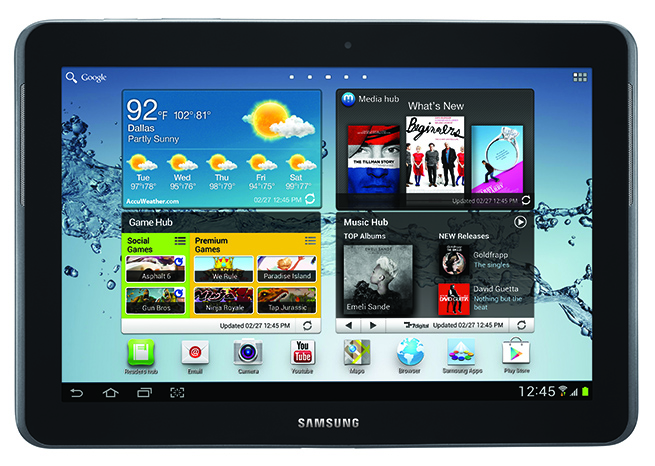 While Samsung’s tablet efforts have not been anywhere near as successful as Apple’s, it continues to make all manner of Android devices from small phones to its 10.1-inch tablets. In a meeting earlier this week, Travis Merrill, the director of Samsung’s Galaxy Tab division, told me that it continues to release so many types of Android phones, tablets, and media players because the company is committed to “consumer choice” and “differentiation.” Basically, the company has the resources to build every possible phone and tablet size and hopes the spread will help consumers find the perfect fit for them.

The Tab 2 7.0 includes a 7-inch screen with 1024-by-600 resolution, 8GB internal storage, microSD slot for adding storage, 1-GHz dual-core processor, VGA front-facing camera, and 3-megapixel back camera. The device will retail for $250, with pre-orders starting tomorrow. It will be available in-store and online on April 22. From early impressions of the device, this appears to be a great buy for $250, especially compared to the $200 Kindle Fire and $250 Nook Tablet.

Both editions of the Tab 2 will include a nice extra: one year’s worth of free 50GB cloud storage with Dropbox. The Tab 2 devices also run Ice Cream Sandwich with Samsung’s TouchWiz Android skin and include Samsung’s custom apps for getting new content like Media Hub, Reader Hub, and Game Hub. One very cool app included on the Tab 2s is called Smart Remote, which lets you scan what shows are currently airing and using IR inputs can automatically change the channel on your set-top box to the show you want.

Merrill indicated that the company was still determining its marketing strategy for these new products, but TV ads are likely not in the works. Instead the tablets and player will receive a “strong” digital campaign.

The company also said it hasn’t forgotten about the Galaxy Note 10.1 tablet that was announced at Mobile World Congress, but said it wouldn’t reveal any new information at this time regarding timing or availability for the U.S. market. Our own Devindra Hardawar noted at that show that the Note 10.1 looks a lot like the Tab 10.1, but it adds in support for the company’s S Pen stylus, something that could help differentiate it from the iPad.