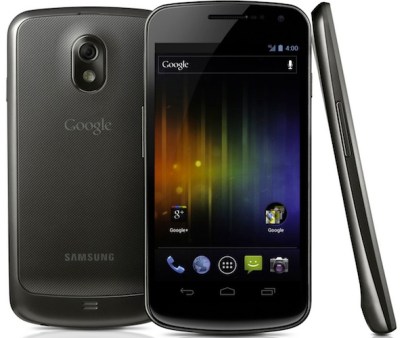 Yes I said phone — not tablet. The Galaxy Nexus is the latest in Google’s flagship Nexus lineup of phones, which have traditionally set the pace for all other high-end Android phones to follow for the next year. Judging from the Galaxy Nexus’s specifications, the competition is going to have a hard time keeping up.

First, the screen: The Galaxy Nexus sports a 4.65-inch display running at a jaw-dropping 1280 by 720 resolution, or the exact same resolution as 720p high-definition video. It’s the first smartphone ever to feature such a large screen and resolution. Google says that Android 4.0 was built specifically for 1280 by 720 displays in mind, which means we’ll likely see many other large-screened Android phones over the next year.

Under the hood, the Galaxy Nexus is powered by a 1.2-gigahertz dual core processor and 1 gigabyte of RAM. It’s the first phone to sport Android 4.0 “Ice Cream Sandwich”, the latest version of Google’s mobile OS, which the company describes as a total makeover. (VentureBeat’s Jolie O’Dell has more details on Android 4.0.)

The Galaxy Nexus features a 5-megapixel rear camera that can shoot 1080p high-definition video (fairly commonplace for most new phones) and a 1.3MP front-facing camera for video conference. Sensor wise, the phone includes the usual accelerometer, compass, and gyroscope. But it also includes NFC capabilities, a proximity sensor, and a barometer (we’re not quite sure about the uses for this yet).

Not surprisingly, the phone will support 4G LTE networks, but Google says it’s also going to offer a HSPA+ version, that will work on faster networks from T-Mobile and AT&T.

For hardcore Android fans, the Galaxy Nexus appears to be a must-have phone. For people with small hands, as well as more general users, its large size could be off-putting. It’s also strange that once again, Google’s newest Nexus phone seems to be behind the curve when it comes to camera technology. Last year’s Nexus S couldn’t shoot 720p HD video, when most other smartphones back then could. Now with the Galaxy Nexus, Samsung for some reason has included a 5-megapixel camera when competitors, including the iPhone 4S, are sporting 8MP shooters.

Ultimately though, the Galaxy Nexus’s camera megapixel deficiency may not mean much. Google showed off some photos and video from the phone during its unveiling event tonight, and the video looked ab0ut as good as other HD footage from the Galaxy S II and iPhone 4S.

The Galaxy Nexus will be available worldwide in November. Google says that it’s launching on Verizon Wireless in the US and NTT Docomo in Japan. No pricing details have been announced yet.