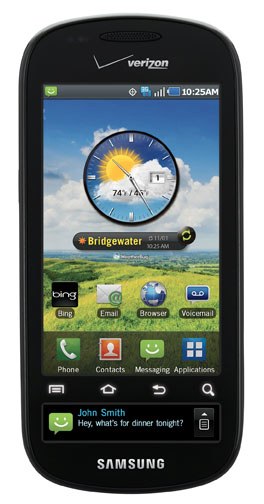 Samsung’s Galaxy S selling spree continues, as the company announces it has shipped 3 million of the Android phones to the US since they first went on sale in July, Reuters reports.

The company’s US numbers are a significant portion of its total 7 million Galaxy S phones shipped worldwide. Sales are moving so briskly that the company wishes it had more supply, according to Samsung chief marketing officer Paul Golden. Supply shortages of the company’s 4-inch AMOLED display are believed to be the current bottleneck cause. Golden says the company is working on ramping up its screen production.

Samsung is definitely going to need to produce more screens if it expects to reach its projected sales of 10 million phones by the end of the year.

The company is also rolling out even more phones that use the AMOLED screens. Last night, Samsung unveiled its Continuum phone for Verizon — which is most notable for the dedicated ticker display below its main screen. Previous glimpses at the phone led us to believe it had two separate screens, but Samsung revealed that the Continuum sports the same 4-inch display as the rest of the Galaxy S family. The display’s top 3.4 inches are dedicated to the main phone screen, while the bottom 1.6 inches offer ticker updates for stocks, texts and the like.

It’s certainly a creative use of screen space, but it’s unclear if consumers will want to pay the same price as the rest of the Galaxy S family for less usable screen area. The Continuum will be available on Verizon November 11th for $200 with a two-year contract (and after a $100 mail-in rebate). Internally it sports the same hardware as the rest of the Galaxy S clan, including a 1-gigahertz Hummingbird processor, 5 megapixel camera, and Android 2.1. Hopefully, Samsung will offer an update to the more recent Android 2.2 release soon.