Samsung is introducing two new productivity-centered tablets built on the company’s Galaxy foundation. Hitting store shelves soon will be the Galaxy Tab S3, along with the 10.6-inch and 12-inch Galaxy Book detachable tablet. However, the company has declined to share when preorders will begin, the pricing, or details about availability.

“What we’ve learned is more is better,” said Samsung’s senior manager of product marketing, Hassan Anjum. “Consumers want to be able to do more with tablets. We’re seeing the rise of the category of 2-in-1 detachable tablets… There are a lot of tablets out there, but we’re seeing a shift in preference to do more in productivity. Entertainment is table stakes.”

While the Galaxy Tab S3 and Galaxy Books are both focused on productivity, there are some key differences between the devices. For one thing, the first is Android-based, while the latter uses Windows. Both support a keyboard and an S-Pen, which evokes some comparisons to the Microsoft Surface Book and the Samsung Chromebook Pro, however only the Galaxy Book has these tools included in the package — it’s optional with the Tab S3.

Samsung said that ultimately its products are about giving consumers more choice. 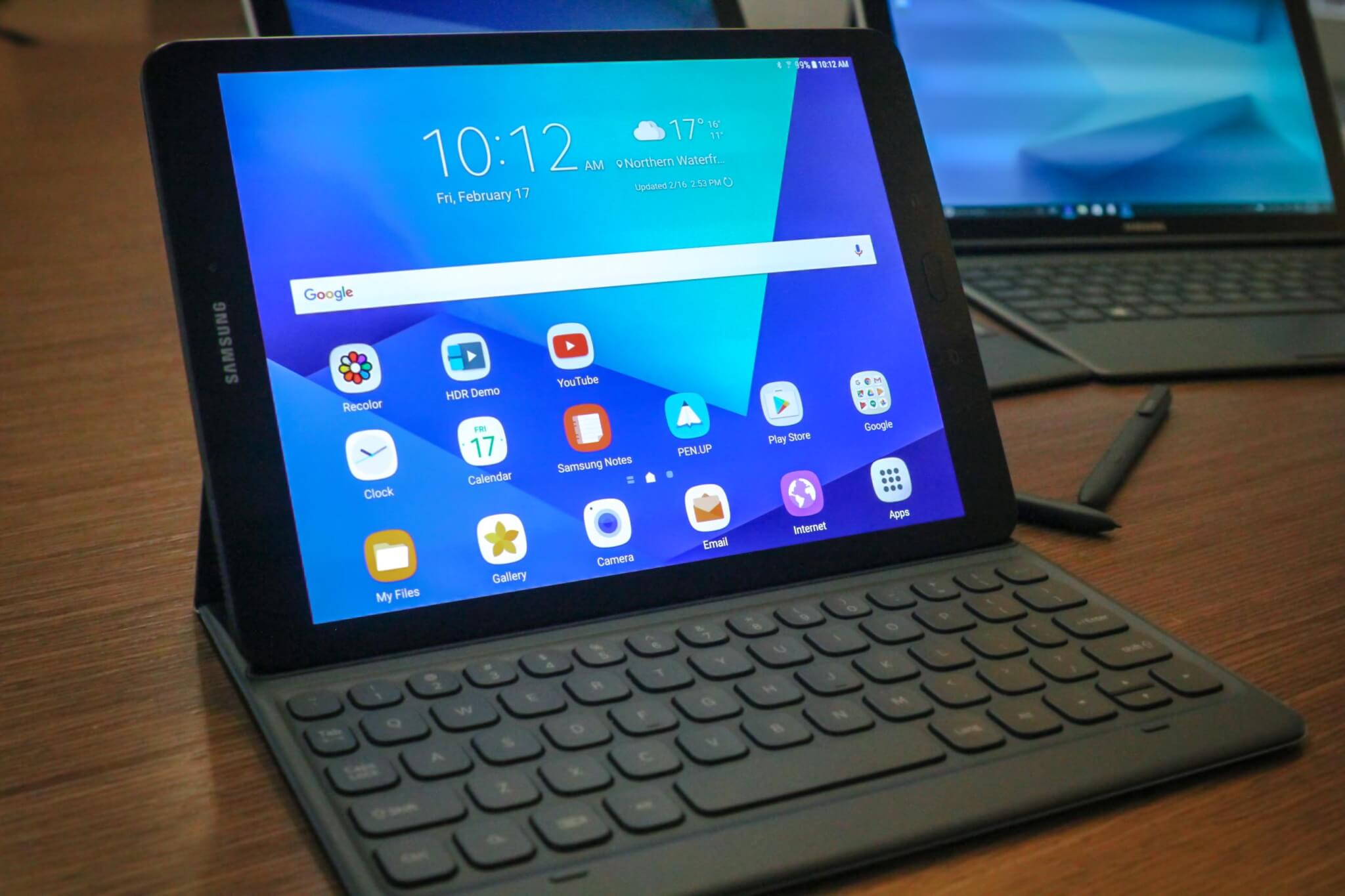 Above: The Samsung Galaxy Tab S3.

The Galaxy Tab S3 is the latest in a series of tablets that goes as far back as 2014. For the first time, the device has a glass backing with metal frame design, having inherited the Galaxy design identity. It has a 9.7-inch Super AMOLED display that provides 2048×1536 screen resolution, a 13-megapixel camera in the bank with a 5-megapixel one on the front, 32GB of storage with an expandable microSD port of up to 256BB, 4GB of RAM, and a 6,000 mAH battery that can be rapidly charged using a supported USB cable.

While the Tab S3 does offer capabilities for bolstering productivity, Samsung believes it can also provide a new level of “immersive entertainment experience.” It comes with Android 7.0 Nougat pre-installed and is equipped with a Qualcomm Snapdragon 820 processor and support for the Vulkan Games API. And no matter whether you’re playing a racing game, watching Netflix, or listening to music, the Tab S3 has quad speakers tuned by AKG by Harman with auto-calibration to adjust the sound based on how you’re holding the tablet. 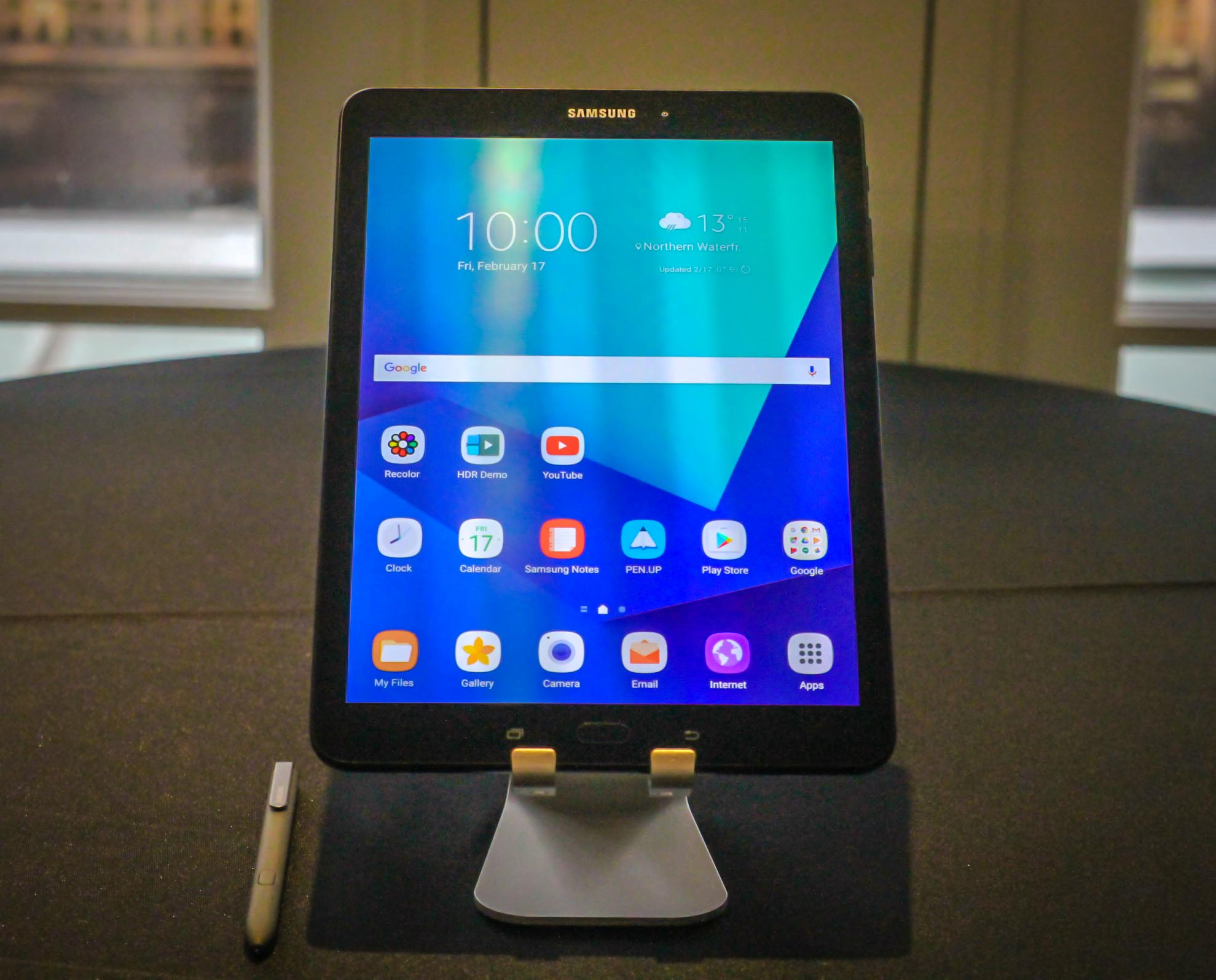 “This is going to be the first tablet that provides a [high-dynamic range]-ready screen made possible by the processor, the Qualcomm Snapdragon 820, and by partners that are announcing HDR streaming capabilities in 2017,” Anjum stated.

Unlike the Tab S2, this new version only comes in one model, which has LTE and Wi-Fi connectivity — Samsung declined to specify possible carriers. The Tab S3 supports Samsung’s Pogo pin keyboard, a feature carried over from the Galaxy TabPro S device that launched last year.

Samsung has also included the game launcher that appeared in the Galaxy S7 and S7 edge so you can share your game play, view the scoreboard, and more. Anjum explained that this was “something that was very important to include.” 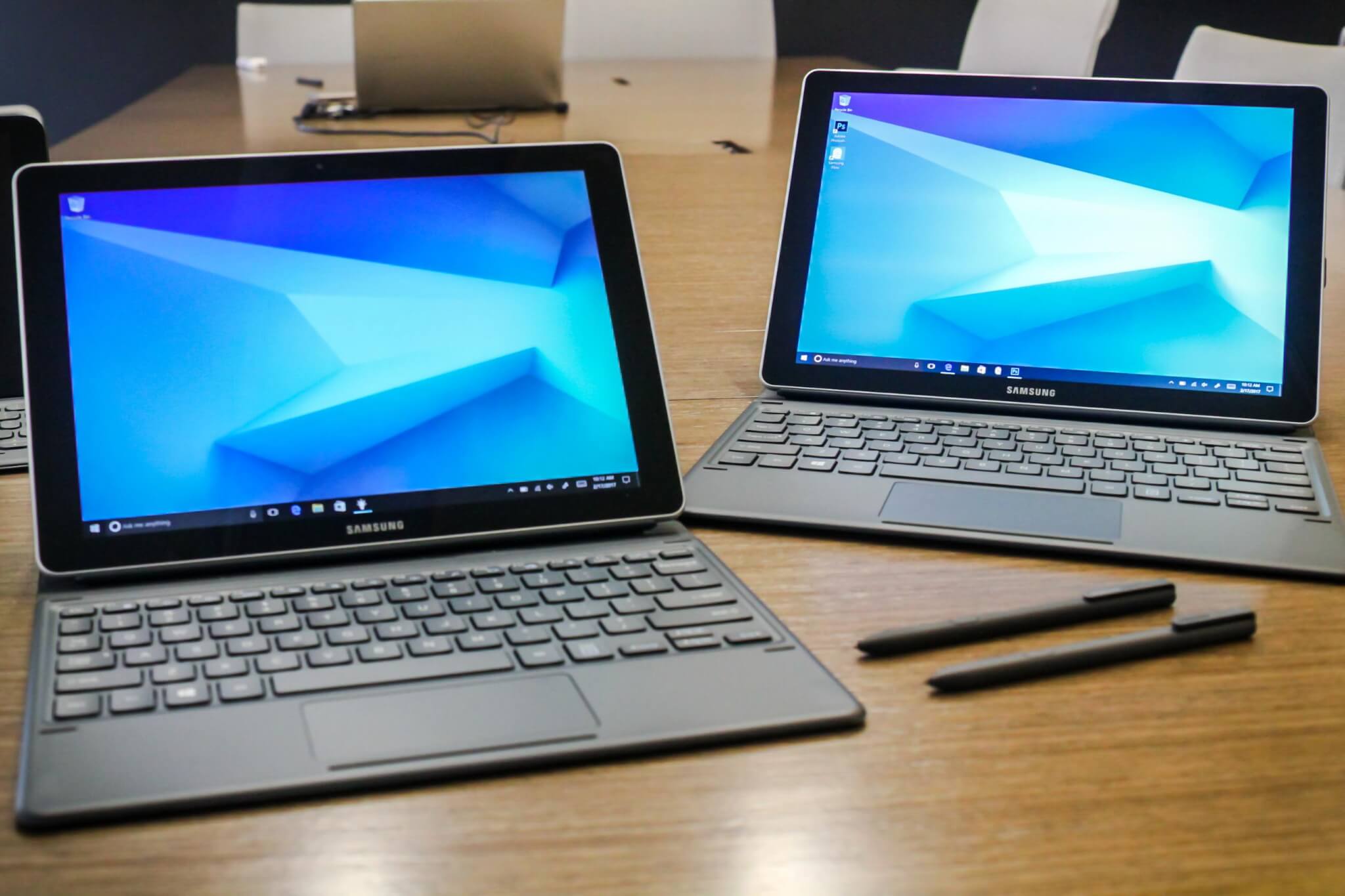 As for the Samsung Galaxy Book, this device is being described as the “next generation of PC-like performance” and comes in two versions: 10.6-inch and 12-inch. Each has a different configuration, with the latter being thinner (7.4mm versus 8.9mm) because of the screen — the 12-inch features Super AMOLED (3:2 full high-definition 2160×1440, 216 pixels per inch) while the 10.6-inch has TFTLCD (1920×1280, 218 pixels per inch). Both weigh 754 grams and come equipped with the latest Intel Kaby Lake processor to provide laptop-like performance.

Anjum described the Galaxy Book as “exceptionally thin and lightweight for easy portability. It offers enhanced usability with a versatile 2-in-1 form factor to easily switch from notebook to easel to tablet.”

The device comes with Windows 10 pre-installed and — like the Tab S3 — uses a detachable Pogo pin keyboard that you won’t have to charge separately (included with the Galaxy Book). However, third-party Bluetooth keyboards are also compatible with the Galaxy Book. 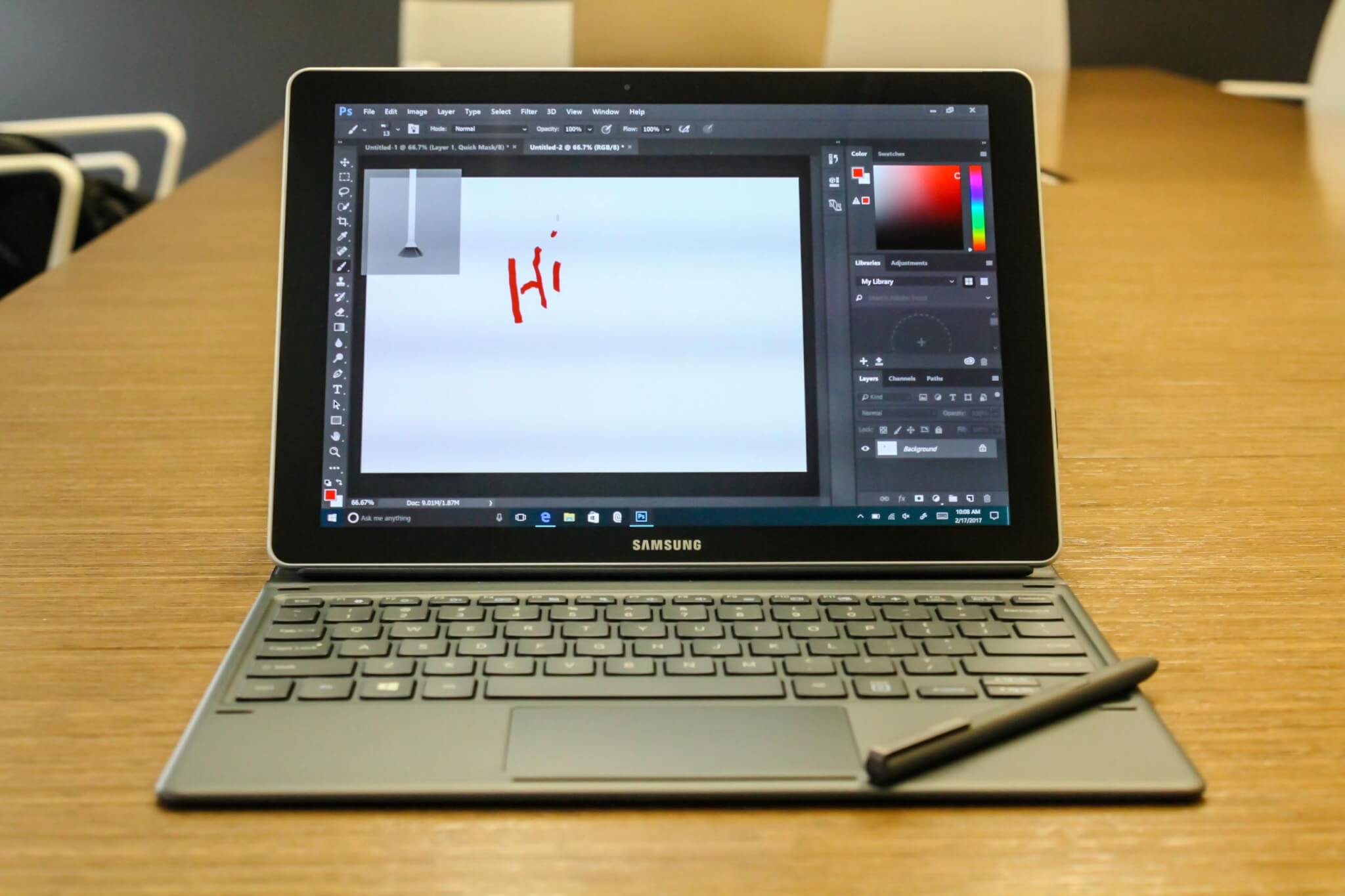 Samsung has built a 30.4W battery into the 10.6-inch version that will provide a 10-hour charge, while the 12-inch version contains a 39.04W battery that’s estimated to last 10.5 hours. Both also support fast charging.

With respect to connectivity, Samsung revealed that the 12-inch device has LTE and Wi-Fi support but said connectivity for the 10.6-inch is still to be determined.

“This is a truly distinguished device,” Anjum said. “We’re the first to introduce Super AMOLED in Windows, first to have an S Pen solution for Windows. We have the fast-charge battery in here, the Kaybe Lake processor is something we’re happy about. We’re in a really distinguished space. That’s something consumers really appreciate.”

One of the things that stood out with the Galaxy smartphones was the S Pen, a digital instrument that was refreshed for the Note7 and has once again been reimagined, this time for both the Galaxy Tab S3 and the Book. It comes in the box with each device and you will never have to charge it. 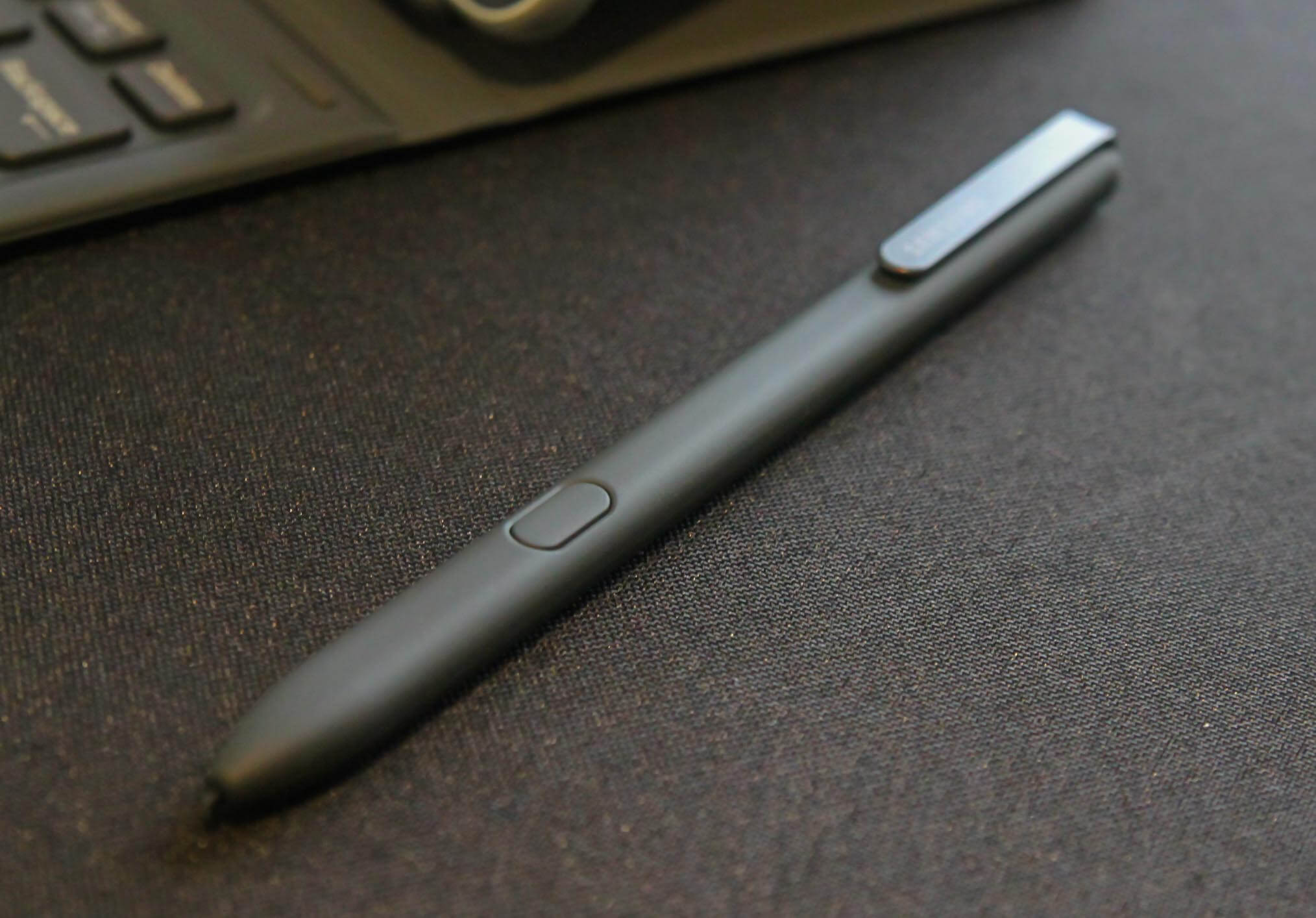 Above: Samsung’s S7 pen for the Galaxy Tab S3 and Galaxy Book.

The pen has a 0.7mm tip (approximately the size of a ballpoint pen), which is the same size as the one with the Note7 and is also made out of rubber. “Against the screen it feels like you’re writing on paper,” Anjum said. Samsung has also included the pertinent S Pen features, including air command, PDF annotation, a drawing tool, the ability to create animated GIFs, screen-off memo composing, and the ability to take screenshots. Palm rejection technology is included to prevent stray marks from sources other than the pen when touching the screen.

The form factor of the S Pen has been modified so that it doesn’t roll over, and it includes a clip that you can attach to other things.

In another first, the option of tilt-like recognition offers users additional creative freedom. Tilt functionality is currently only supported through Adobe’s suite of products, but additional partners could be added in the future. “This is the only pen that has tilt-like recognition for Windows,” Anjum claimed. “No other accessory can make that claim.” 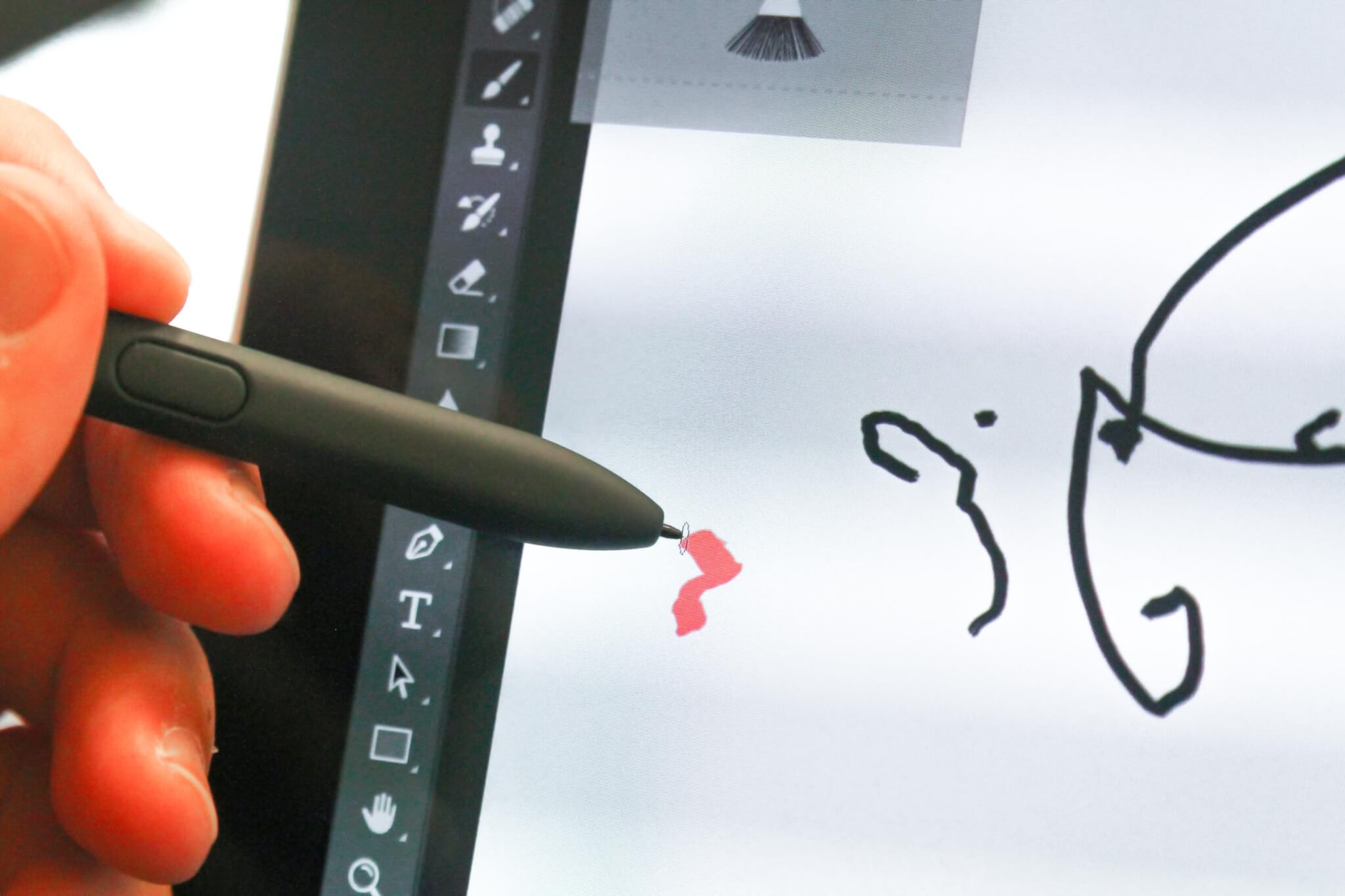 In 2014, Samsung introduced its take on Apple’s Continuity service, called Flow. Through it, you can transfer files and app activity between various ecosystem devices, such as the phone, TV, computer, and, of course, tablets. Both the Samsung Galaxy Tab S3 and Galaxy Book support this feature, meaning that you can auto-tether your device, receive push and phone notifications, share content, and respond to native apps, text messages, and emails in a streamlined fashion.

Anjum shared that Samsung has integrated Flow with some third-party apps, including WhatsApp, Kakao, Viber, and SMS. What’s more, if you receive a phone call through your Tab S3 or Galaxy Book, you’ll be able to answer it through your mobile device.

As for any artificial intelligence features on these devices, such as inclusion of Google Assistant or Viv technology, Samsung declined to comment.

“Our new tablet portfolio is built with premium technology that delivers a productive and versatile experience to consumers, designed for users at home, work, or on the go,” said Samsung Electronics’ president of mobile communications business, DJ Koh, in a statement. 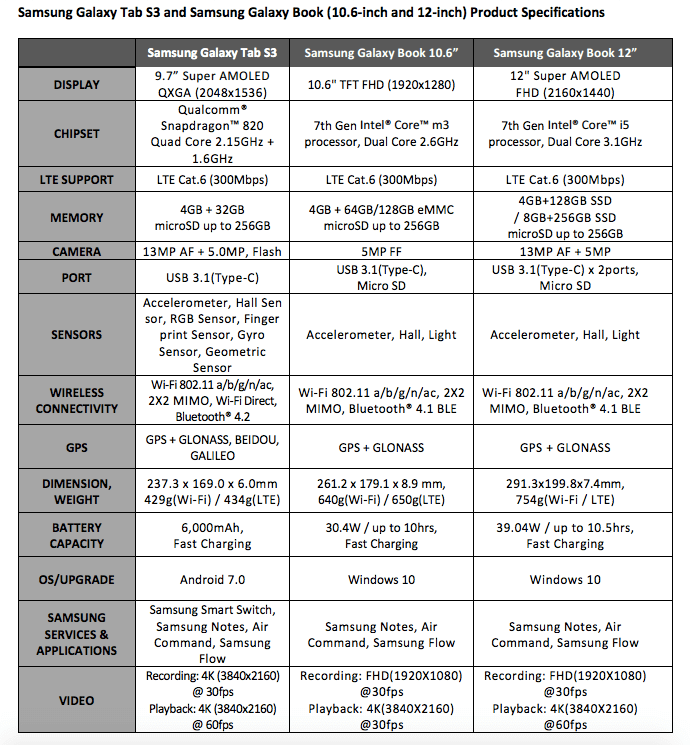 Updated as of 4:53 p.m. Pacific on Sunday: Clarified that the Samsung Galaxy Book is the only device that comes with a keyboard and S Pen.