The standard collection of pre-event rumors unofficially outed all of Samsung’s new wearables ahead of its Galaxy Unpacked Event, and now Samsung has confirmed the new products with an official leak of its own. As discovered by SamCentralTech, an update to the “Pick your device” screen of the Android app Galaxy Wearable (formerly Samsung Gear) shows several new devices: Galaxy Buds earphones, Galaxy Fit and Fit e fitness trackers, and the Galaxy Watch Active smartwatch.

Of the three, the least established is Galaxy Buds, a pair of truly wireless in-ear headphones that appear to nestle inside ear canals with rubber tips, leaving larger circles visible outside. While rumors have suggested that the Buds will come with a wireless charging case that can be refueled using inductive chargers on the backs of new Galaxy smartphones, today’s leak only officially confirms the name and buds themselves, as well as white and black color options. More detailed specs will need to wait for the event (or another leak).

The Galaxy Fit and Fit e fitness trackers appear to be direct sequels to Samsung’s prior Gear Fit devices. Besides confirming the names and apparently imminent announcement, the leak shows a black metallic watch-like device with a long color screen that displays the time and a step counter, attached to a seemingly non-detachable black plastic band. The Fitbit competitors are expected to include GPS, heart rate monitors, and the ability to store music. 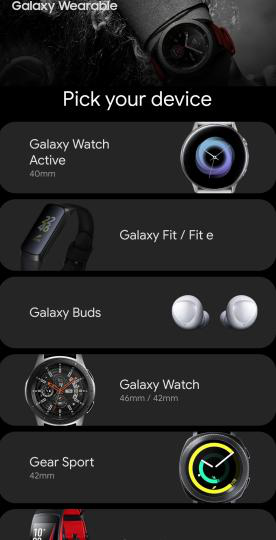 Galaxy Watch Active’s inclusion on the list isn’t a real surprise at this point, as prior leaks appeared to reveal its name and all of its technical specifications. The new wearable was already expected to drop the rotating bezel of Samsung’s flagship wearable, 2018’s Galaxy Watch, for a sleeker design. But a reference to the watch in a 40mm size may explain one discrepancy in recent leaks, which have questioned whether the screen will be 1.3 inches or 1.1 inches in width. Just like the Galaxy Watch, it’s possible that Samsung will offer Active in two sizes with the same 360 x 360 screen resolution.

We’ll cover the Galaxy Unpacked Event on February 20 as it happens in San Francisco. Based on other leaks, Samsung is also expected to reveal the Galaxy S10 smartphone family and three new retail stores in California, New York, and Texas.