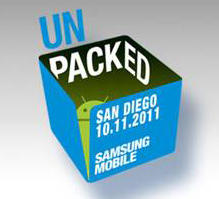 Samsung has announced a press event for Oct. 11, and many mobile pundits suspect it’s where the Nexus Prime smartphone and the next version of the Android operating system will be officially shown for the first time.

The Android OS update, Ice Cream Sandwich, was leaked in video form earlier today and leaked in photo form in mid-August. Now we should finally be able to see it officially running on the hyped “Nexus Prime” smartphone.

The Nexus Prime, or Droid Prime, will almost certainly be the first phone running Ice Cream Sandwich. The device is expected to feature a 1.5-GHz dual-core processor, a huge 4.5-inch screen, and have 720p (1280 by 768) video resolution. Most likely, it will be incredibly similar to the awesome Galaxy S II phones Samsung unveiled a month ago and run on the Verizon Wireless network.

Ice Cream Sandwich appears to take cues from existing Android OS versions Honeycomb (for tablets) and Gingerbread (for phones). It uses a cool blue color instead of green on notifications and icons, has a Honeycomb-like multitasking menu and a revamped notification bar and camera interface.

The Nexus Prime and Ice Cream Sandwich debuts will help make October the biggest month for smartphones this year, as Apple is expected to introduce a new version of the iPhone at a press event Oct. 4 and release the new iPhone the week after the event.

Are you pumped about the Nexus Prime and Ice Cream Sandwich? Do you think it will compete well with the new iPhone?