Samsung gave the world a first look at the latest iteration of its best-selling smartphone, the Galaxy Note 5, at a press event in New York City today.

Samsung said at an earlier private product briefing that it is working on “staying ahead of the curve” when it comes to the things consumers want in a smartphone.

They may have nailed it with the Galaxy Note 5, the latest upgrade of the best-selling premium phone in the Samsung line. “Our Note customers are our most loyal,” one Samsung spokesperson said.

The Galaxy Note 5 is slightly smaller in height, width, and thickness than its predecessor. “People said the Note 4 was too big for them,” a Samsung representative said.

The first thing you’ll notice about the new phone is the new pen stylus design, and that the pen just works better. In the note-taking app, for example, it’s clear that the display is reacting quickly and naturally to the touch of the soft tip of the pen. It feels more like good old manual pen-and-paper note-taking.

The Note 5 comes with a newly designed S Pen stylus, which can be used to take notes, draw, or select apps and other content. The stylus has a clicker on the end, just like a real ink pen.

In addition to the S Pen, Samsung announced a keyboard for the phone that acts as a cover. The snap-on cover gives the Note 5 a BlackBerry like keyboard that power users will appreciate.

The new Note brings some new interface tricks to the table. The screen wakes up from sleep when you take the pen out of its slot, so you just take out the pen and start writing. 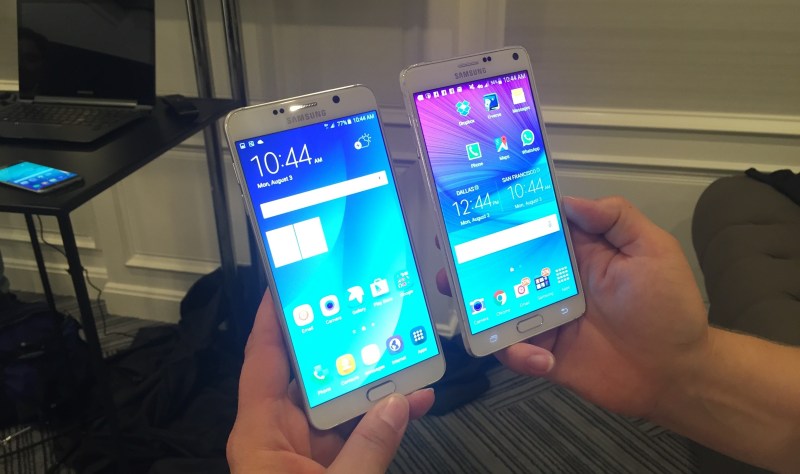 Above: The smaller Samsung Galaxy Note 5 on the right, and the Galaxy Note 4 on the left.

A feature called Enhanced Air Command allows the user quick access to S Pen apps from any screen. The pen controls, as well as a group of apps that support pen-based entry, can be pulled out from the side of the screen. The user can also add their own apps to the control panel.

Some of the apps in the Enhanced Air command panel include:

The Note 5 is one of two new Samsung phones that are first to market with the new, faster LTE Cat. 9 technology, which pushes up the ceiling for wireless connection speed. Samsung also says the Note can charge batteries faster by using baked-in wireless charging to go from empty to full in two hours.

The Note 5 is also among the first Samsung phones to ship with Samsung Pay, the mobile payment system that supports both contactless NFC payments and magnetic secure transmission (MST) payments.

At the same event, Samsung also announced a larger version of the Galaxy S6 Edge, which adds the word “Plus” to the end of the name. The S6 Plus, as it turns out, has very similar specs to the Note 5. Both the Note 5 and S6 Edge Plus ship with Samsung’s wireless charging technology, which Samsung says is compatible with virtually any wireless charging pad available today.

In the U.S., the Galaxy Note5 will be available in Black Sapphire and White Pearl – in 32GB and 64GB memory options.  AT&T, Sprint, T-Mobile, U.S. Cellular and Verizon Wireless will all carry the device. Samsung says the carriers and retailers will confirm specific pricing and availability. Expect the 32GB Note 5 to cost roughly $700 with a contract or installment and between $850-$900 for the 64GB version.

The Note 5 will also be available through Best Buy, Amazon.com, BestBuy.com, Costco Wholesale, Sam’s Club, Target, and some Walmart stores.

The Note 5 will be available for purchase across the U.S. and Canada starting on August 21.