Device maker Samsung says an Australian judge who banned the sale of the Galaxy Tab 10.1 in that country does not know the basic facts of the case, and her reasoning  is “grossly unjust.” Lawyers for Samsung are appealing a temporary injunction that has frozen the company out of the market due to claims that Samsung  “slavishly copied” the iPad when creating its own tablet, according to the Sydney Morning Herald.

Samsung’s attorneys claim the judge in the case did not properly evaluate the merits of Apple’s infringement suit before issuing an injunction, which “stopped dead,” any efforts by the company to sell its tablet computers in Australia.

“We contend that the primary judge made a series of fundamental errors in her disposition of the interlocutory application. They were all errors of principle,” Samsung’s lawyer told the court.

A final hearing is not scheduled until March of 2012, and Samsung would be prevented from selling the tablet in Australia until the matter is resolved. The company’s lawyers want to undo this ruling and speed up the time table for a final ruling.

While Samsung continues to fight in the legal arena, others are left to wonder just how closely the company copied the iPad.  Samsung, which produces the A6 chips that will be in future Apple iOS devices, maintains the originality of the intellectual property in its product. Apple’s quadcore A6 chips are produced by Samsung in its Austin, TX foundry, and are the brains that power applications on the phone. Despite the tense relationship, Apple is still dependent upon Samsung to manufacture the chips, but has rival TSMC has begun making test batches, according to EE Times, which would give Apple significant leverage in the future.

However, it’s not the first time that Samsung has been accused of stalking Apple.

Check out this picture of a Samsung store in Italy with several logos for Apple’s Safari browser printed on the back wall. This is important, because at the very least it indicates that Samsung is very reckless with its brand, or it could further indicate the extent to which the company really does follow Apple’s every move. 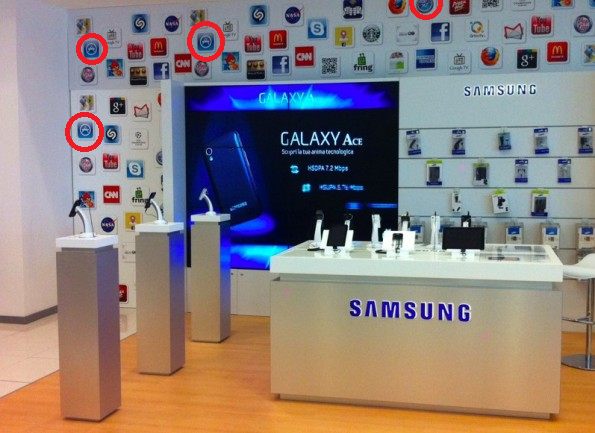