After months of leaks, Samsung has officially unveiled its newest set of flagship phones, the Galaxy S8 and S8+, confirming what VentureBeat previously reported. Coming more than a year after their predecessor was introduced, the new devices are designed to provide more screen real estate, while still fitting comfortable in the palm of your hand, and enhance productivity through Samsung’s Bixby intelligent assistant.

Samsung is accepting preorders for the Galaxy S8 and S8+ premium smartphones starting March 30 and will also include the new Gear VR headset, Oculus-powered controller, and a game pack for free. The phones will be available in stores on April 21, at which time they’ll come with free AKG by Harman earbuds.

Pricing has not been revealed for the devices, but it’s said that they could run for more than the S7, at least in Europe. VentureBeat has previously reported that in the region, the S8 will be €799, while the S8+ will be €899.

An interesting thing to note is that Samsung has done away with the “edge” moniker for the larger phone model, instead opting to use “+.” The company declined to explain the reasoning. 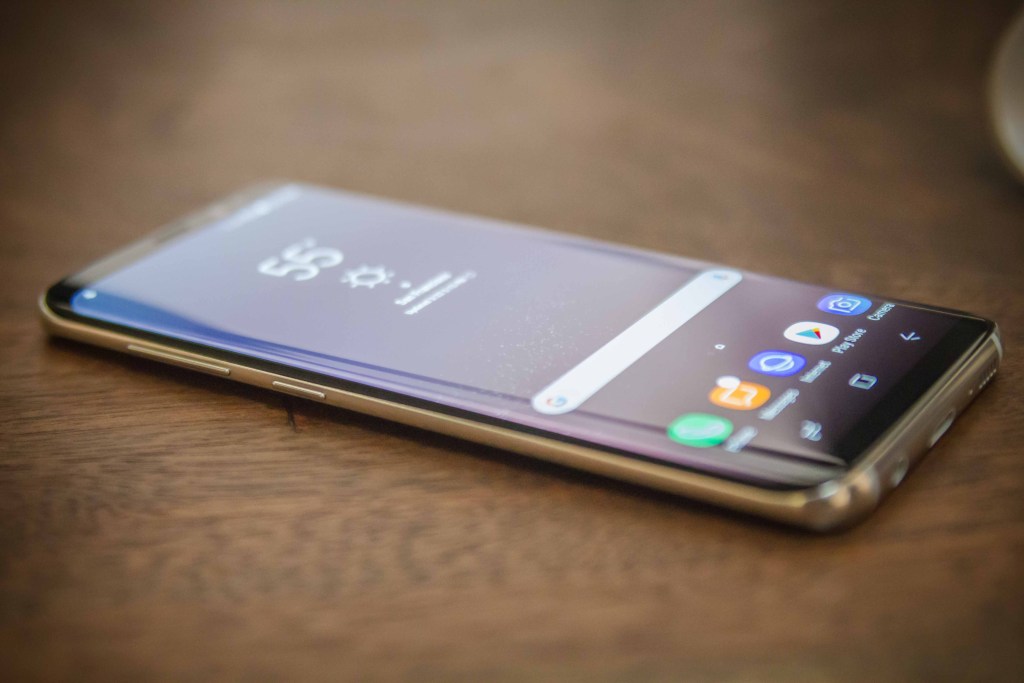 Above: The Samsung Galaxy S8

The Samsung Galaxy S8 and S8+ are bigger than previous models, with a 5.8-inch and 6.2-inch 1 Quad HD+ screen, respectively. Both have 2960×1440 screen resolution and an aspect ratio of 18.5:9. By comparison, the Galaxy S7 has a Super AMOLED Quad HD screen and 2560×1440 resolution. “There’s an idea that everyone wants a big screen, but not everyone wants to carry a big phone,” a company spokesperson explained. “How do you carry around a big screen without it feeling like a big phone?”

While the screen size might seem daunting for those considering the S8 or S8+, from our initial hands-on, the devices fit snugly in the palm of our hand. Samsung said it has tried to remove all the bezels, providing what it calls an “infinity display” to make watching videos and other things more immersive. In fact, 83 percent of the entire device is now covered by the display.

“We tried to remove all of the bezels,” the company said. “It wraps around the display and is symmetrical on the front and the back. To do this, we had to redesign [the phone] from the inside out….the key part…is that people are consuming a lot of content. When it comes to browsing, shopping, ebooks, etc., you can see more and scroll less immediately from the display. It’s an amazing viewing experience for videos — almost like movie-style.” 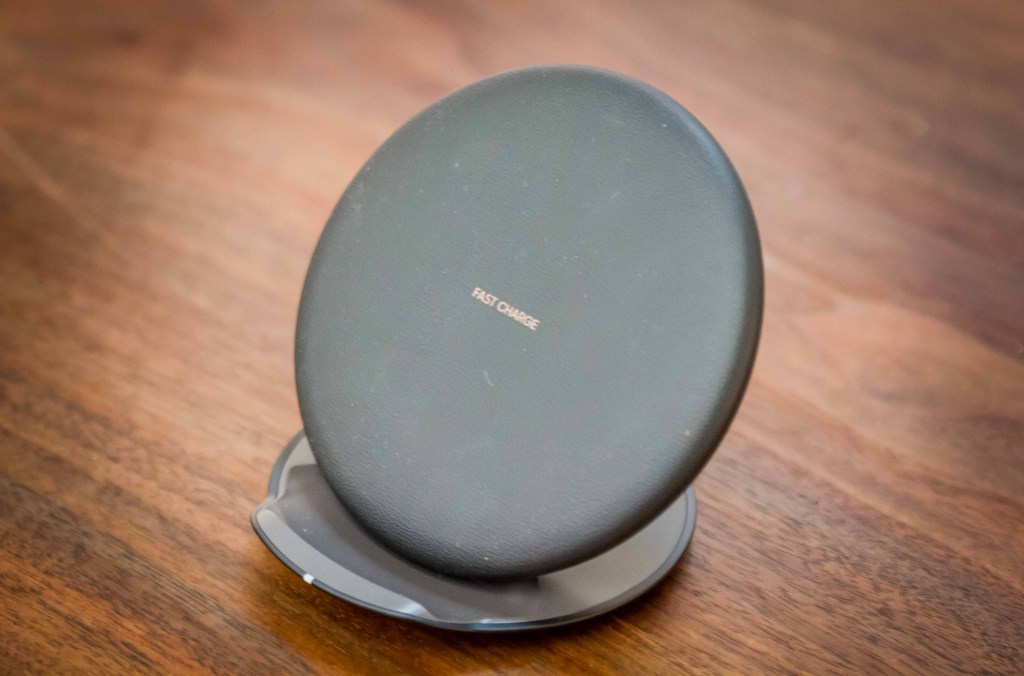 Above: Samsung has redesigned its fast-charging station.

Samsung said that its new phones have been certified by the Ultra High Definition Alliance, offering assurances to content creators that their work will be viewed exactly the way it was intended.

Because of the enlarged screen area, the fingerprint scanner and home button have been removed from the front of the device. Instead, the S8 and S8+ have a virtual home button — a pressure-sensitive area at the bottom of the screen to provide tactile feedback. It’s in this area that you’ll also find the back button and the option to view open apps and tabs.

The fingerprint scanner has been relegated to the back of the device (to the right of the camera, where the flash once was). While newer Android devices, like the Google Pixel, have also had the scanner in the back, this is the first time Samsung has done so. The positioning may be off-putting to some, but the company didn’t offer any explanation except to state that it was a design choice.

In terms of the operating system, Samsung has equipped the Galaxy S8 lineup with the most recent version of Android: 7.0 Nougat. The device’s predecessor had Android 6.0 Marshmallow installed.

Both S8 models are also IP68 water- and dust-resistant. 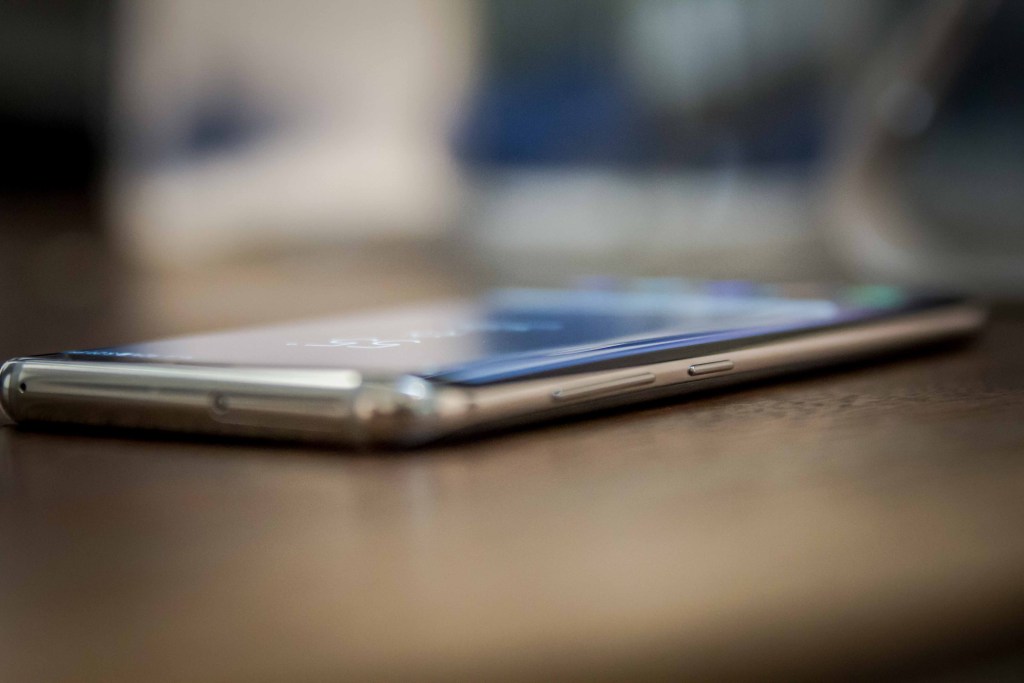 Above: Samsung’s Galaxy S8 has a near bezel-less display that wraps around the device, with a screen covering 83 percent of the phone.

As for the other specifications of the S8 and S8+:

Processor:
The devices come with an Octa core processor — 2.3GHz Quad and 1.7GHz Quad or 2.3GHz Quad and 1.9GHz Quad, depending on the market and mobile operator. Regardless, it has a 10 nanometer processor that Samsung manufactured and that the company believes will provide higher performance and more efficient power consumption.

Memory:
Both the S8 and S8+ are equipped with 4GB of RAM and 64GB of storage. While the RAM remains the same, Samsung has doubled the size of the hard drive, perhaps due to the Galaxy’s evolution from a consumer device to one that also appeals to working professionals. The phones also possess a microSD slot that allows expanded storage of at least 256GB. 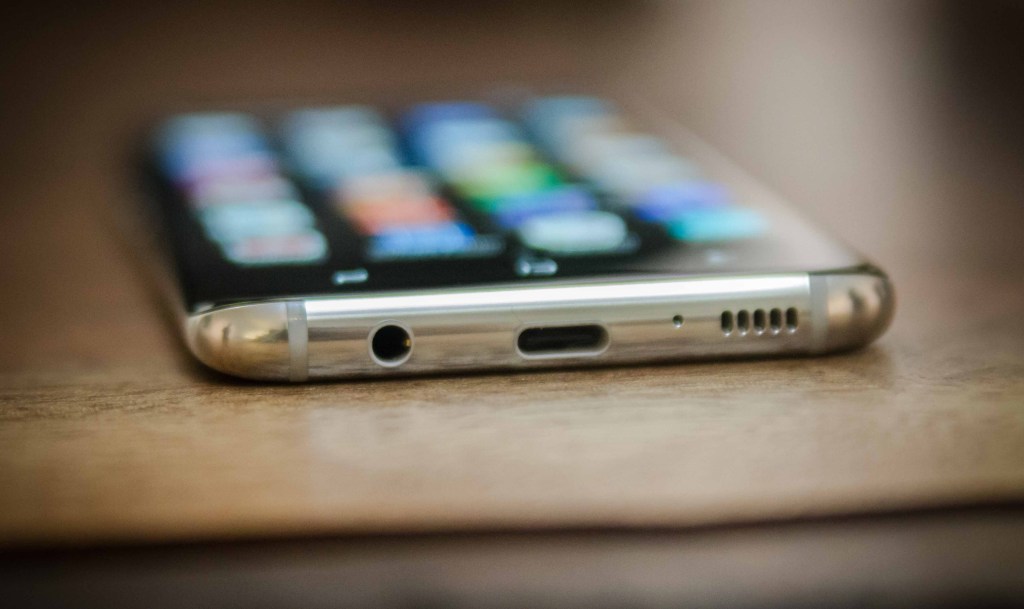 Above: The Samsung Galaxy S8 and S8+ has a headphone jack and USB-C port.

Battery:
The S8 has the same sized battery as its predecessor, at 3,000 mAh, but the S8+ is smaller than the S7 edge, at 3,500 mAh (previously 3,600 mAh). Wireless and fast charging is supported, and Samsung has also redesigned the docking station for a sleeker more modern look.

Samsung addressed the battery issue that plagued the Note7, calling it a “learning experience” and assuring listeners at the briefing that “we’ve done a lot of work to take the learnings to define new processes and understand innovation is also about the same spirit [as] quality.” The company sought to remind everyone that the batteries undergo an eight-point test to ensure safety.

Security
As mentioned earlier, the fingerprint sensor has been moved to the back of the device, but it’s not the only security measure that Samsung has included in the S8 and S8+.

Besides the scanner, standard PIN code, and pattern features, there’s also the iris scanner that was introduced with the Note7. On the front of the device are two cameras, one intended for photos and the other specifically designed to scan your iris. Unfortunately, it’ll only be able to accept one iris scan, and if you have prescription glasses, you might have to remove them before scanning.

Something new to the S8 is facial recognition, which Samsung believes will provide even greater security.

In addition to the plethora of protective measures on this device, it’s also backed by the Knox service, which could appeal to those in the enterprise. Samsung said that it’s about “giving consumers choice in how they want to secure their device.” 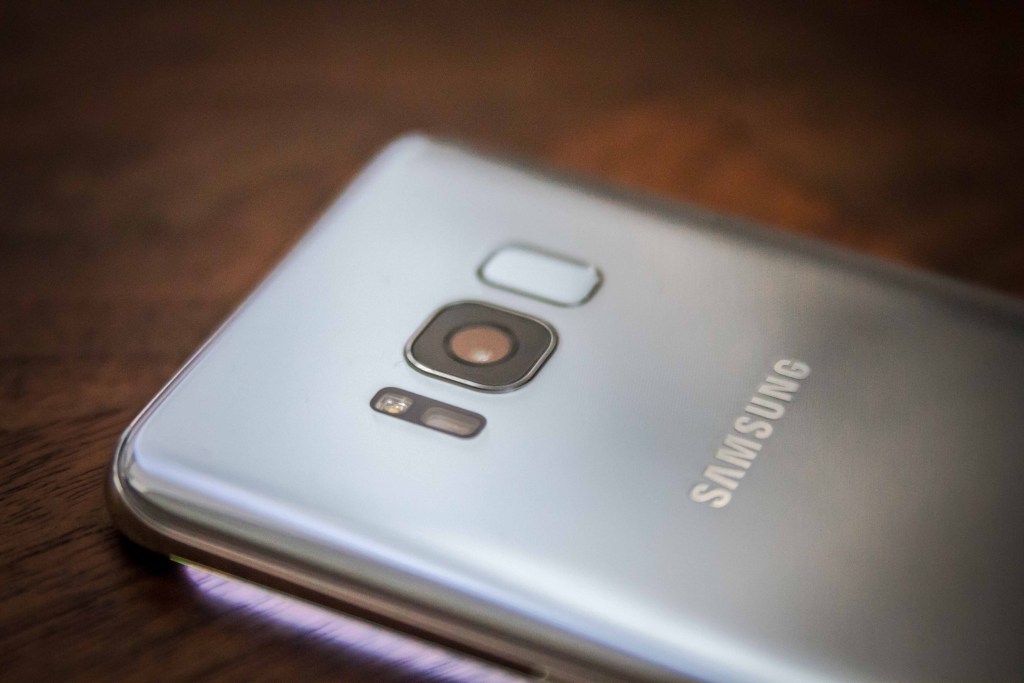 Above: The fingerprint scanner and camera on the back of the Samsung Galaxy S8.

Camera:
For all the updates being made to the S8 and S8+, the camera is perhaps a big disappointment, as you’ll find minimal updates here. While both versions have the same 12 megapixel dual pixel (f/1.7) rear-facing camera, the front-facing camera has been upgraded from 5 megapixels to 8 megapixels (f/1.7). Improvements in the front camera are intended to enhance the quality of selfies and group shots, even those captured with a selfie stick, and Samsung has updated the software accordingly to quickly identify and focus on faces.

You’ll notice many of the features from the S7 and S7 edge, such as being able to capture sharper and better images in low light and super-fast autofocus — for the first time, this feature also works for the front-facing lens.

But even though the camera hasn’t seen significant improvements, it opens up other capabilities on the device. In fact, Samsung described the lens as the “entry point to intelligence.” 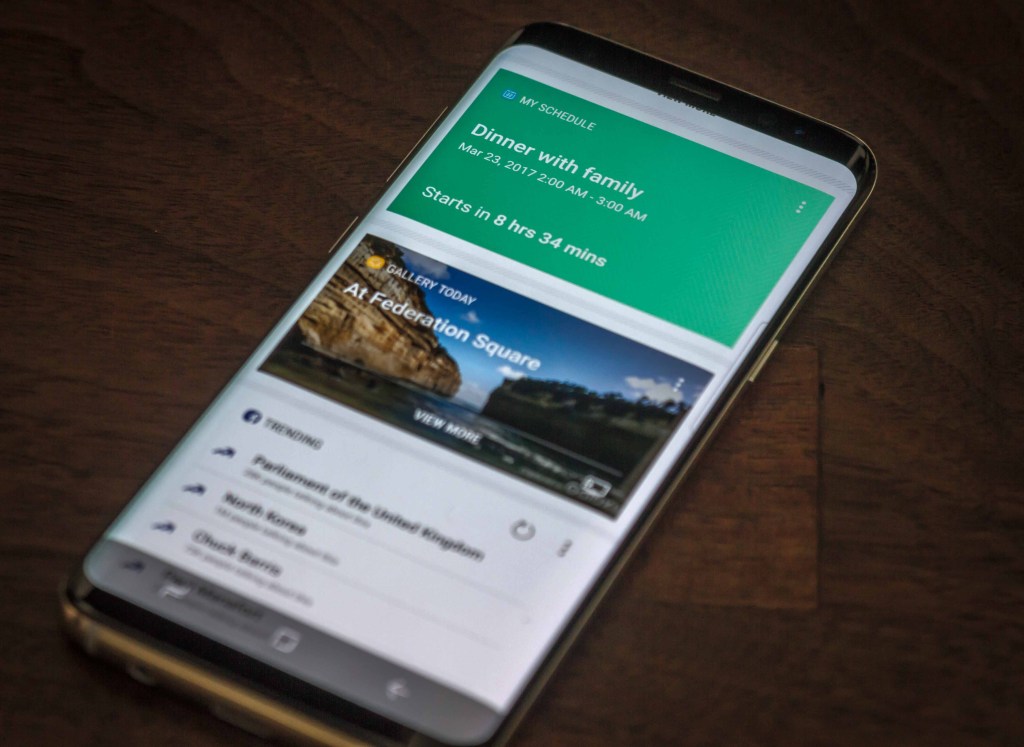 Perhaps the biggest addition to the Galaxy S8 line is Bixby, the artificial intelligence tool that Samsung hopes will compete against Siri, Google Assistant, Amazon Alexa (if it was on a mobile device), and Microsoft Cortana. The S8 and S8+ also come with Google Now.

To activate the new assistant, you can either utter the wake word “Bixby” or press a button on the side of the device. There’s also a dedicated page called Bixby Home on the S8 and S8+ — if you swipe right from the home screen — replacing the Flipboard offering that was available on the Galaxy phones for several years.

While AI assistants are largely voice-based, Samsung has leveraged the camera on the Galaxy S8 and S8+ to apply image recognition. With it, you can scan products to identify them, get recommendations, or even purchase them using Bixby.

Most of Bixby’s capabilities have already been revealed, but the company took time to demonstrate them today. However, during a hands-on session, Samsung declined to make the AI available for reporters to try themselves.

Bixby is intended to be more than just an AI assistant on your phone — it’s designed to connect all your smart devices to make managing your home a lot easier. At first, Samsung is limiting the integrations to a “handful” of apps, including its native apps, but additional developer support is expected. However, we have to wonder, could the company be over-hyping Bixby’s potential?

[Check out our first impressions of Bixby here]

Bringing the best of the Note7 into the S8/S8+ 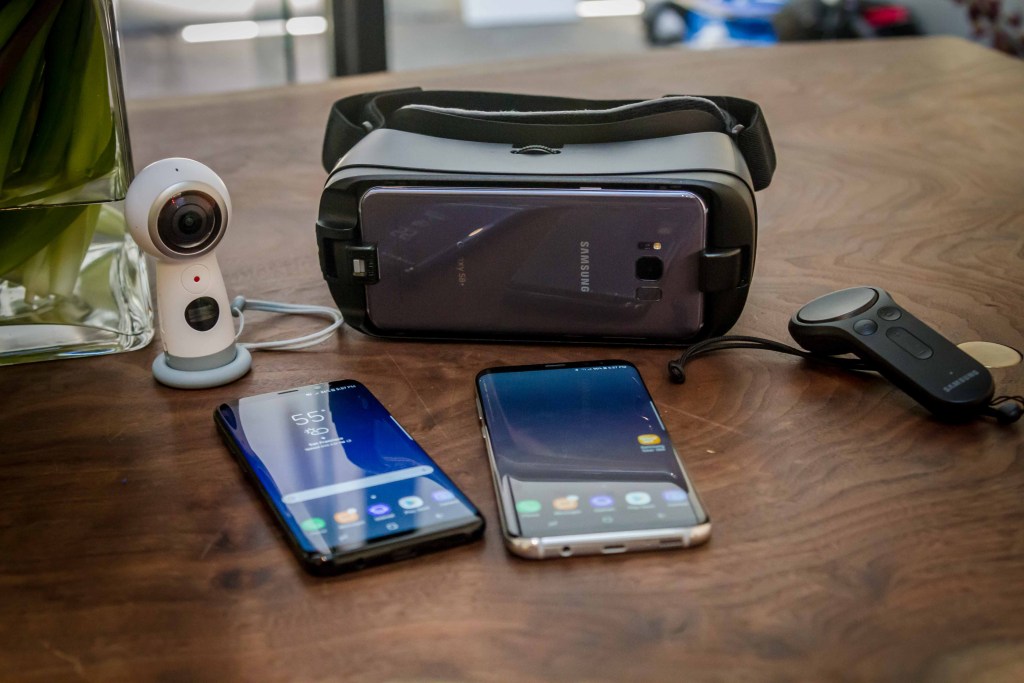 Above: Some of the devices announced at Samsung Unpacked: The Galaxy S8/S8+, the redesigned Gear 360 camera, and Gear VR headset with Oculus-powered controller.

In the aftermath of the Note7 meltdown, there were some questions about what would happen with the advanced features Samsung had bestowed on the device. It’s good to see iris recognition, secure folders, and other features being incorporated into the S8 and S8+. But it’s also an indication of the changing mindset at Samsung, as it strives to make the new phones appealing to both consumers and working professionals.

Besides revealing the Galaxy S8 and S8+, Samsung has also announced a slew of other devices, such as the DeX, a dock that will transform your phone into a desktop PC — you can leave your laptop at home and just use your phone for all your needs, whether at a desk or on the go.

In addition to new phones and Samsung DeX, other announcements from today’s Unpacked event include a new Samsung Connect Home Wi-Fi mesh router with a built-in SmartThings hub, updated Gear VR headset with Oculus-powered controller, and a upgraded Gear 360 camera.