Samsung is back with two more additions to its Galaxy smartphone lineup. As expected, the phone manufacturer has introduced its Galaxy S7 and S7 edge at this year’s Mobile World Congress. The devices, while not exactly the most closely guarded secret, have been touted by the company as “future proof.” The design also fits in with Samsung’s “no compromise” philosophy, whereby the company aims to give users a beautiful product, but one they won’t have to worry about shattering or even dropping in water.

Pricing was not revealed prior to the phones’ debut. In the United States, AT&T, Sprint, T-Mobile, U.S. Cellular, and Verizon Wireless will carry both versions of the smartphone. Beyond hitting up the traditional carriers, you will be able to purchase the phones at Best Buy, Car Toys, Sam’s Club, Staples, Target, and Walmart.

While Verizon hasn’t officially released its pricing, Best Buy said that the Galaxy S7 and S7 edge will be available for $199 and $299, respectively, with a two-year contract. The retail giant said that if you pre-order through its site, you’ll not only receive a free Samsung Gear VR but also a free 64 GB memory card.

Preorders will start at 8:00 a.m. Eastern on February 23, with the devices in stores on March 11. 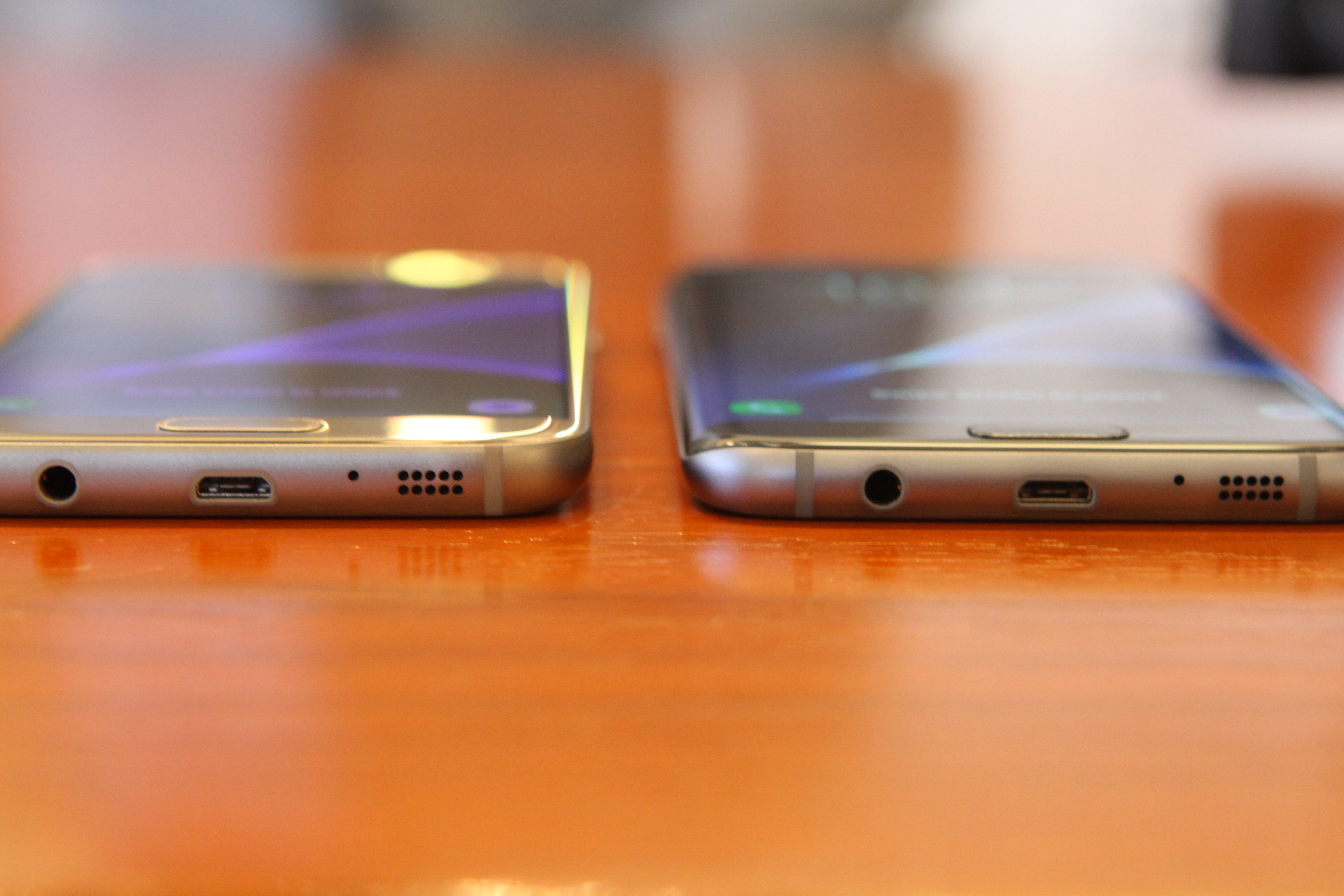 The Samsung Galaxy S7 and S7 edge are similar in many respects, except the former has a 5.1-inch Super AMOLED Quad HD screen and the latter a 5.5-inch Super AMOLED Quad HD screen — both offer 2560×1440 resolution. The Galaxy S7 series phones have a standard storage capacity of 32GB, a metal finish with a 3D curve gloss back, and feature an always-on display that allows you to reimagine the standby screen, setting it to show the time, date, calendar, and notifications, for example.

The company took ergonomics into account when building the S7 and S7 edge, explaining that what often prevented people from moving to bigger screens was difficulty holding the device. Samsung believes that the refined design will allow you to easily hold either smartphone and make it easier to fit them into a pocket or purse.

The devices also offer waterproofing, dust resistance, expanded storage of up to 200GB with a dual SIM SD slot, and an improved battery, all of which VentureBeat reported on earlier this year. A Samsung spokesperson told us these features were removed from the S6 smartphones because “we focused on recreating our design from scratch. We felt that adding water resistance would add too much bulk.” The spokesperson added that “For all of these features, we listened to customers who wanted them in a mobile device and decided we could include them at this point, thanks to advances in our design and technology, without sacrificing the great look and feel that people loved in the Galaxy S6 family.”

The phones are rated IP68, signifying that they’ve withstood submersion in 5 feet of water for 30 minutes, which Samsung boasted about in one of its recent overseas commercials. As for the dual SIM, while it won’t work in the U.S., the company said it could be used as a dual SIM holder in certain regions. 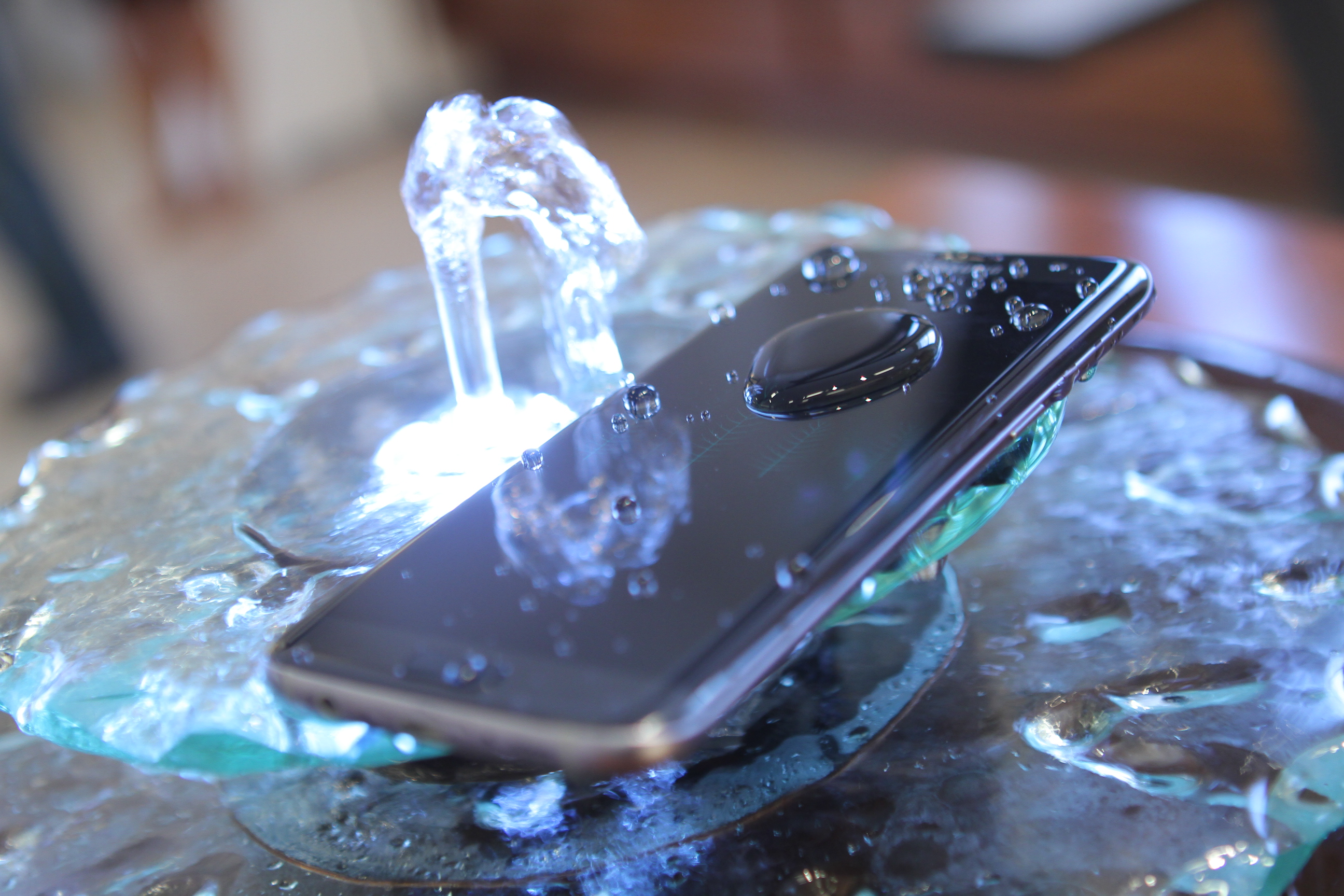 Above: Samsung showcases the waterproof capability of its Galaxy S7 smartphone.

In terms of power, the Samsung Galaxy S7 comes with a 3000mAh battery (compared to the 2500mAh battery in the S6). The S7 edge features a 3600mAh battery (versus 2600mAh in the S6 edge). The phones support not only a fast-charging cable, but also wireless charging, something that wasn’t available with the S6. In tests, Samsung said that the S7 smartphone series charges “as fast as the Samsung Note 5.”

The batteries in the S7 and S7 edge aren’t replaceable, something Samsung told us “would have required a removable battery cover.” The company added that “we felt that the best implementation of water resistance on a phone for our users is a sealed battery.”

The devices use a microUSB instead of USB Type-C, which the company defended by saying “it was not the right time to bring [it] to our mobile products.” A spokesperson explained that some of the key benefits of USB Type-C were already available with microUSB, including fast charging. “Also, using microUSB ensures backwards compatibility with our existing Gear VR product. We do use USB C on other products, like our new TabPro S Windows tablet, and we are evaluating the technology for future use on mobile.” 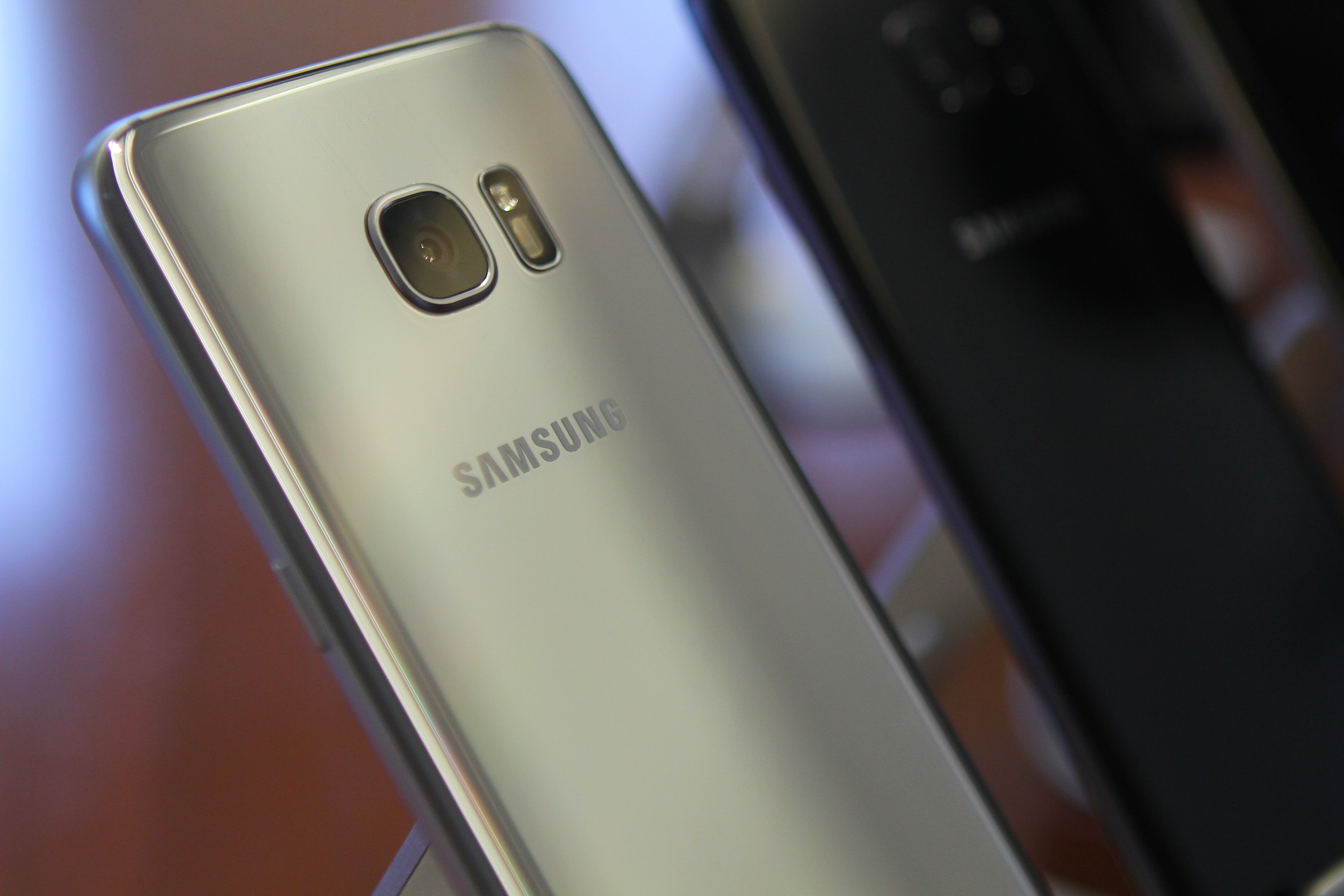 Above: Samsung’s Galaxy S7 and S7 edge smartphones have a 12-megapixel camera that’s flush with the back of the device.

The advanced camera system included in both the Galaxy S7 and S7 edge features a super-fast autofocus and is designed to be used anytime day or night. The camera is now more flush with the phone and has a brighter F1.7 lens and larger 1.4 µm pixels on the image sensor, allowing it to capture sharper and better images, even in low light. In a demonstration, Samsung highlighted this capability against the iPhone 6s Plus. Comparison photos showed that the S7 edge focused more quickly than the iPhone 6s Plus and also produced less noise and a sharper image. The camera’s aperture has also been improved by 25 percent from the F1.9 in the S6. 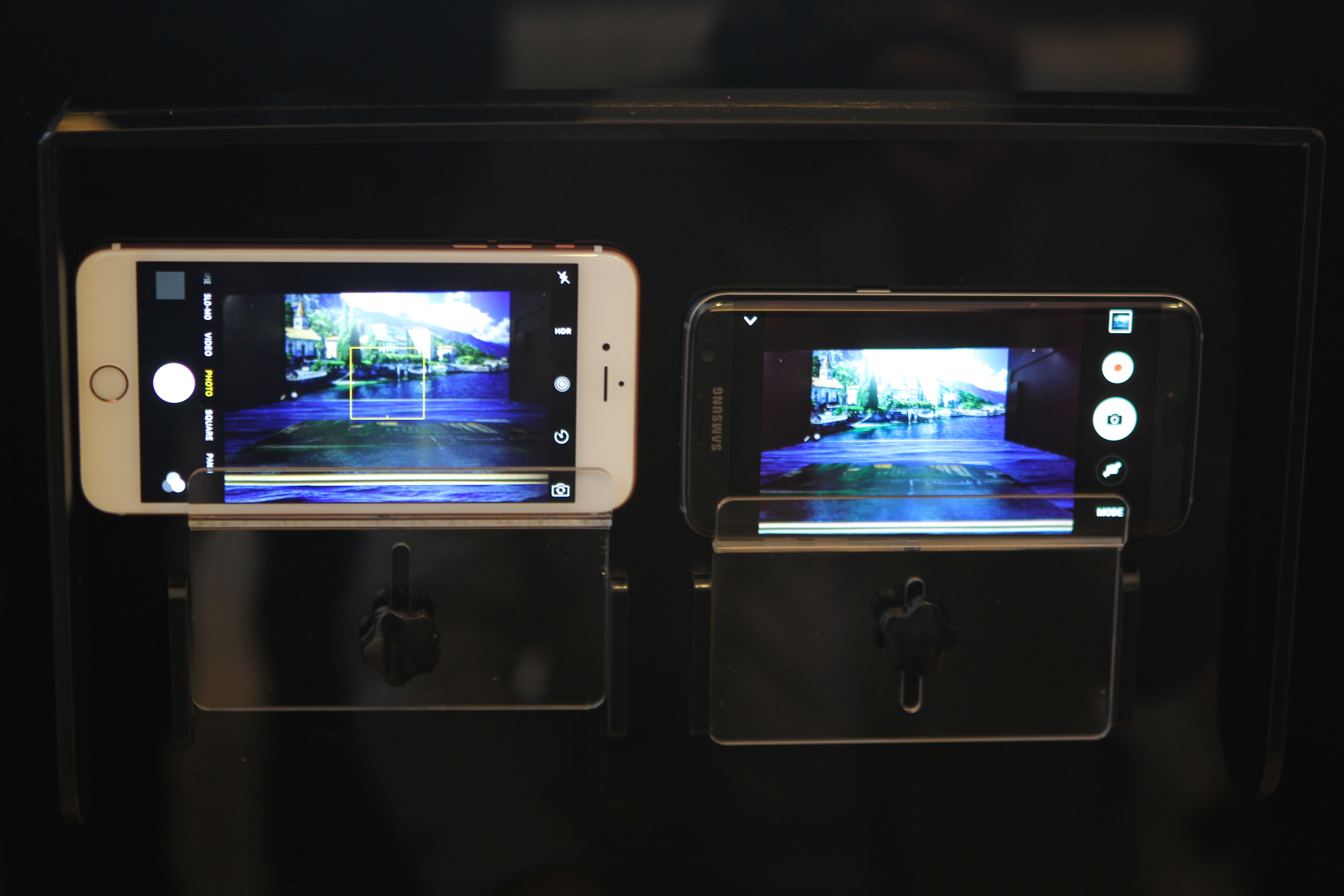 Above: Samsung demonstrates the fast autofocus capability of its Galaxy S7 camera against the iPhone 6s Plus.

The devices have one of the first dual-pixel sensors, with a 12-megapixel rear camera, which enables it to capture twice the amount of information and focus much faster, improving the face-detection focus capability. One hundred percent of the pixels will be available for autofocus and image capture, something Samsung claims will eliminate blurry images.

Samsung has also taken into account gameplay on its Galaxy S7 and S7 edge smartphones. The company has added a new mode that really pushes the processor in both devices, allowing for smoother graphics and more efficient battery use. When game mode is implemented and the phone detects that you have downloaded two or more games, it’ll automatically group the games into a special folder, a feature you can opt-out of. The mode will also let you play games in full screen, minimizing notifications and reducing distractions. 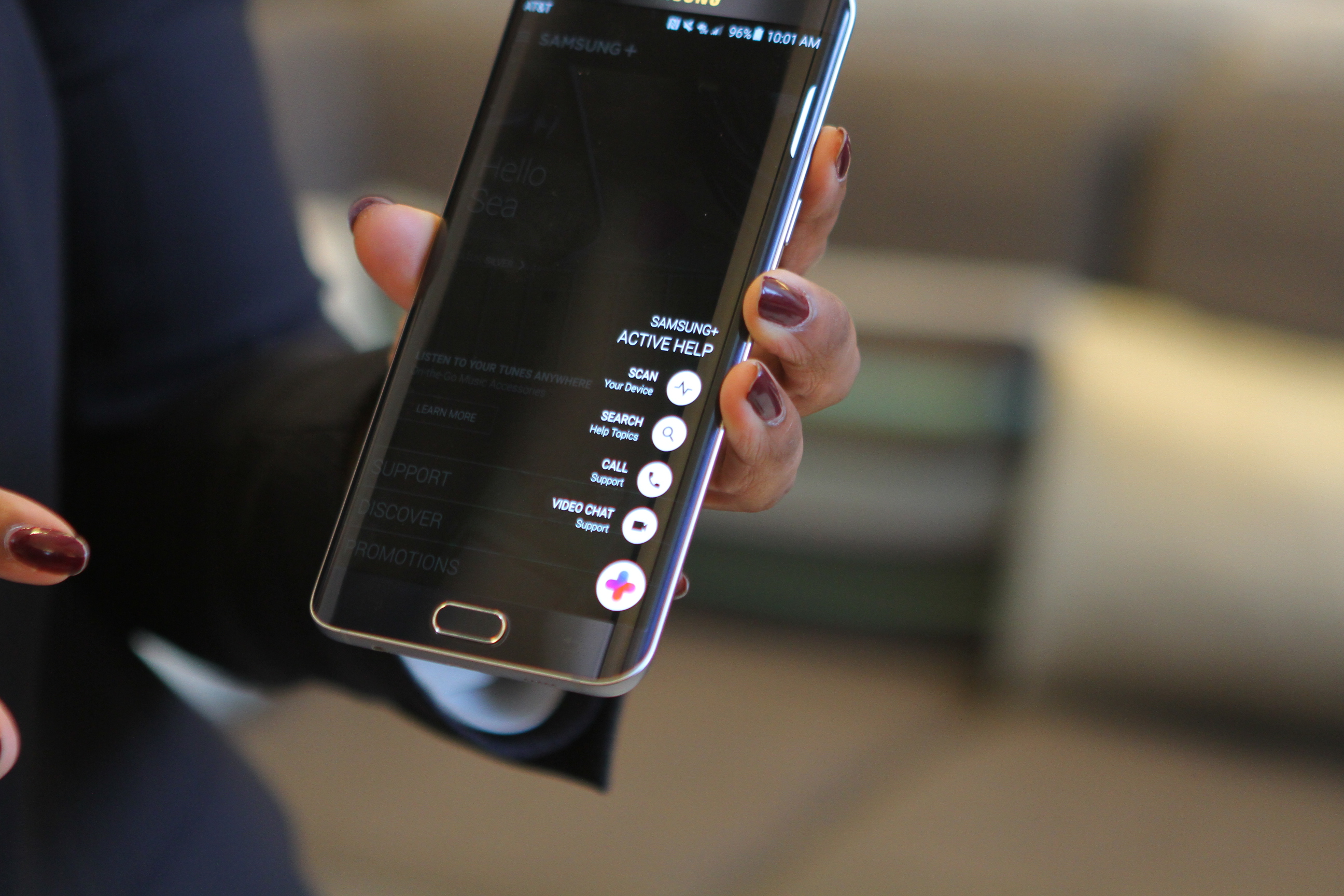 When playing, you can screenshot your game, share a video of your gameplay to Twitch, enable a Do Not Disturb mode, and more. The buttons on the S7 and S7 edge phones can also be locked. Lastly, the phone allows you to control the frames per second to optimize performance. Calling the S7 the world’s fastest smartphone, Samsung said that it will support the Vulcan API, so you can enjoy those desktop games on your mobile devices.

Both the S7 and S7 edge come with Samsung Pay, which the company recently shared is being used by 5 million people and has processed over $500 million in its first 6 months. The devices also support NFC and MST. The mobile security technology KNOX is preinstalled, providing protection for companies whose employees bring their own devices to work. 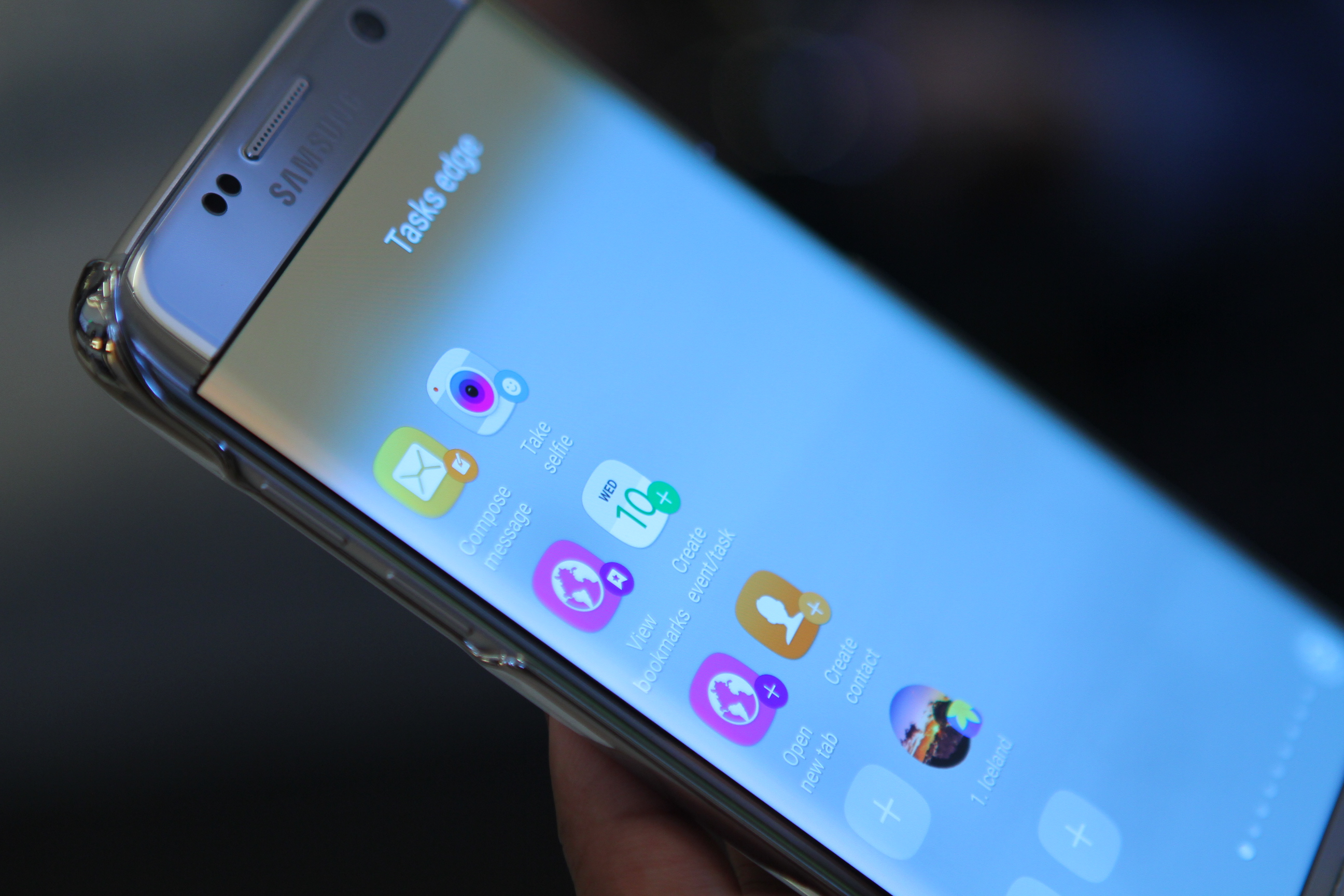 Above: Photo of one of the edge columns that’s available on the Samsung Galaxy S7 and S7 edge smartphones

With the S7 edge, specifically, Samsung has added several new user panels, including panels for applications, tasks, people (contacts), as well as third-party panels (several of which were already available in previous Galaxy series). You can have up to nine columns activated, and the company has said that edges can be created based on your location and Wi-Fi, allowing for further personalization.

To mark the introduction of the S7 and S7 edge, Samsung is offering a special promotion: If you purchase a device between February 23 and March 18, the company will give you a free Gear VR powered by Oculus headset, along with a six game bundled package.

Updated at 10:55 a.m. Pacific on Sunday: This post has been updated to include carrier pricing for the Samsung Galaxy S7 and S7 edge from T-Mobile, AT&T, and Sprint.

Updated at 11:32 a.m. Pacific: Updated to include references to Best Buy and Verizon pricing.