More than a year after introducing its 360-degree camera, Samsung is updating it so it’s “cuter” and meets the needs of creators. The latest incarnation now has a slimmer design that makes it look like a miniature Kuri robot, an improved camera that can now record 4K video, iOS support, and livestreaming capability through YouTube.

Samsung has not released pricing for its next-generation Gear 360 camera nor when it’ll go on sale, but it’s possible that the device could run about the same as its predecessor at $350. 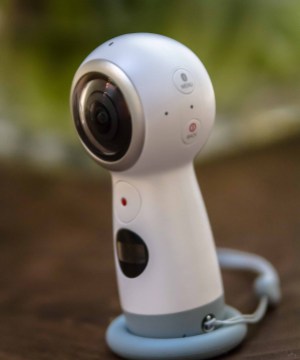 A competitor to the Ricoh Theta, 360fly, I-mmersive’s Veye, and Kodak’s SP360, the Samsung Gear 360 isn’t necessarily geared towards hardcore professionals — rather those who want to show a comprehensive view of what’s going on, be it a sporting event, family gathering, or destination. Unlike the first generation which had a few quirks, the latest iteration no longer takes the shape of a baseball. Its slimmer form factor, now similar to the Ricoh Theta, makes it easier to grip and less conspicuous when used out in public.

Samsung has also done away with the accompanying mini-tripod, instead providing a “body” that helps it stand up easily, along with a tether for added safety. The upgraded version is lighter too, weighing 4.58 ounces (130 grams) versus 5.39 ounces (153 grams). But the battery is smaller, at 1,160 mAh compared to 1,350 mAh before.

The new Gear 360 is equipped with two CMOS 8.4 megapixel fisheye cameras. It can record 15 megapixel JPEG images or 4K videos with a 4096×2048 resolution (24 frames per second) — Samsung’s first-generation supported what the company claimed was “90 percent of 4K.” All media can be stored on a microSD card of up to 256GB.

The camera is also meant to work in as many places as possible, which is why Samsung has once again made it IP53 dust certified and water resistant.

Beyond the standard capture modes — video, photo, time lapse video, looping video, and landscape HDR — the Gear 360 camera now supports livestreaming. Although it’s limited to 2K and just to YouTube, it gives creators more flexibility in producing video to share, and this could open up new content to view across virtual reality. The company didn’t provide a specific answer for why it opted for YouTube instead of Facebook or Twitter, but said to “watch this space” in the future.

Samsung has also expanded support for its 360 camera across not only its own mobile ecosystem, but also iPhones with iOS 10 or later installed.

The company said that it has seen tremendous interest from not only amateur creators but also professional organizations, such as The New York Times. However, specific sales numbers were not disclosed. Samsung hopes to have the Gear 360 out to as many people as possible in order to provide new ways to capture memories.

Today’s announcement comes as Samsung also unveiled the Galaxy S8 and S8+ smartphones, a new SmartThings router to connect its devices with the Internet of Things, and a new docking station.