We first caught wind that Samsung may be working on the odd smartphone in late March, when Business Korea reported a Samsung official as hinting, “The industry believes that the commercialization of foldable smartphones will be possible in 2016.”

Since then, SamMobile reported at the end of May that the “dual screen, possibly foldable” early-stage device is known internally as Project Valley or Project V.

But that report didn’t include leaked images, nor make any reference to possible specs or release date — which is what makes Tuesday’s development so interesting.

According to the Weibo user, the device will have 3GB of RAM, an SD card slot for expandable storage, a non-removable battery, and either a Snapdragon 620 or Snapdragon 820 chip. It also hints at a January unveiling, though this may not mean that it actually goes on sale then. 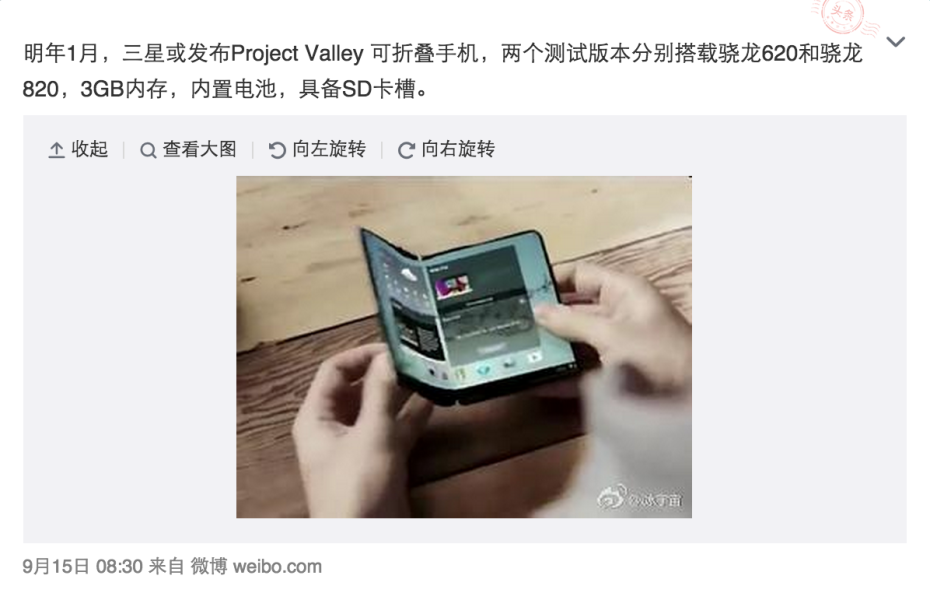 “[The concept] plays to Samsung’s strengths in components and displays after all,” Bryan Ma, an Asia-based technology industry analyst at IDC specialising in mobile and computing, told VentureBeat. “One could argue that Samsung took the lead against Apple a few years ago on the back of phablets.”

“So similarly, being faster than the rest of the industry with this could help Samsung repeat some of that success. But that’s just an optimistic (and theoretical) scenario. It’s not clear how usable nor reliable that screen is yet. And as we all know, hardware alone doesn’t guarantee success,” he added.

On Monday we reported that LG could unveil a rollable TV prototype next year, though it wasn’t expected to be available for the mass-market for another four to five years.

What it does point to is the possibility that such foldable screen technology by the likes of LG and Samsung is now moving beyond a purely conceptual stage.

“Flexible screens have theoretical potential in that they can provide more screen real estate and perhaps still fit into one’s pocket or purse, thus opening up quite a bit of potential in portability and usability,” Ma said.

“Foldable screens have been talked about for many years now, so the question is whether the technology has reached a stage where it can be [made] reliably, which may be easier said than done,” he concluded.

In any case, it will certainly be an interesting space to watch between now and Q1 2016.