In two weeks, Samsung will unveil one of the most anticipated smartphones of the year: the next class-defining Galaxy Note phablet.

This year’s model, the Note7, has seen even more interest than usual, due to both its envelope-pushing iris scanner technology and Samsung’s decision to leapfrog the Galaxy Note6 branding. But from a bird’s-eye view, perhaps the most interesting aspect of the device is that it will be the first flagship handset from a major manufacturer that exclusively features a non-traditional form factor.

One Note to rule them all

There is just one single Galaxy Note7 model — one whose dual-curved-edge screen in past years would have seen Samsung brand it as the Galaxy Note7 edge. This time around, however, the curved screen model will be the star of the show; there is no, in popular parlance, Note7 “flat.” And that could have major implications for the rest of the mobile industry.

Other manufacturers, albeit only a small handful, have released nontraditional handset designs before. Perhaps the most obvious example is the arc-shaped G Flex line from LG, which in 2014 and 2015 included the original G Flex and G Flex 2 — but there’s no G Flex 3 this year. Samsung itself offered a curved-bodied design in 2013 known as the Galaxy Round, but it was largely a proof-of-concept device whose sales were restricted to its home country of South Korea.

But none of these handsets — save for the curved-edge BlackBerry Priv — had the grand ambitions of the Note7. They were largely niche models, while Samsung’s Galaxy Note routinely sells in the millions and contributes significantly to the mobile division’s bottom line. It is not a product with which Samsung can afford to experiment too much. Therefore the lack of a safety net here (in the form of a flat model) suggests that the company is confident it can sell enough of this higher-priced, curved-screen phone to hit financial targets.

In an industry rife with iterative upgrades and “me-too” designs — and one in which high-end specs are quickly becoming commoditized at razor-thin margins — Samsung is attempting to show the premium end of the market a way forward. It’s doing so with a little bit of technological innovation, to be sure, but the larger bet here, by far, is that unique design will prove a sufficient differentiator.

And by all accounts, this is only the first in what promises to be several years of breakthrough form factors from the Korean conglomerate. Up next, in what could truly prove to be a disruptive wave of devices, Samsung plans to offer smartphones with foldable screens.

As Bloomberg reported last month, Samsung may launch as many as two such devices — known internally under the codename “Project Valley.” One of these is supposedly a smartphone that folds in half, and the other is allegedly a phone that opens to the size of a small tablet when desired. It’s unlikely that either will be positioned as flagship products initially, but the possibilities they portend are tantalizing: offering the advantages of larger screens without the tradeoff of larger-sized devices. 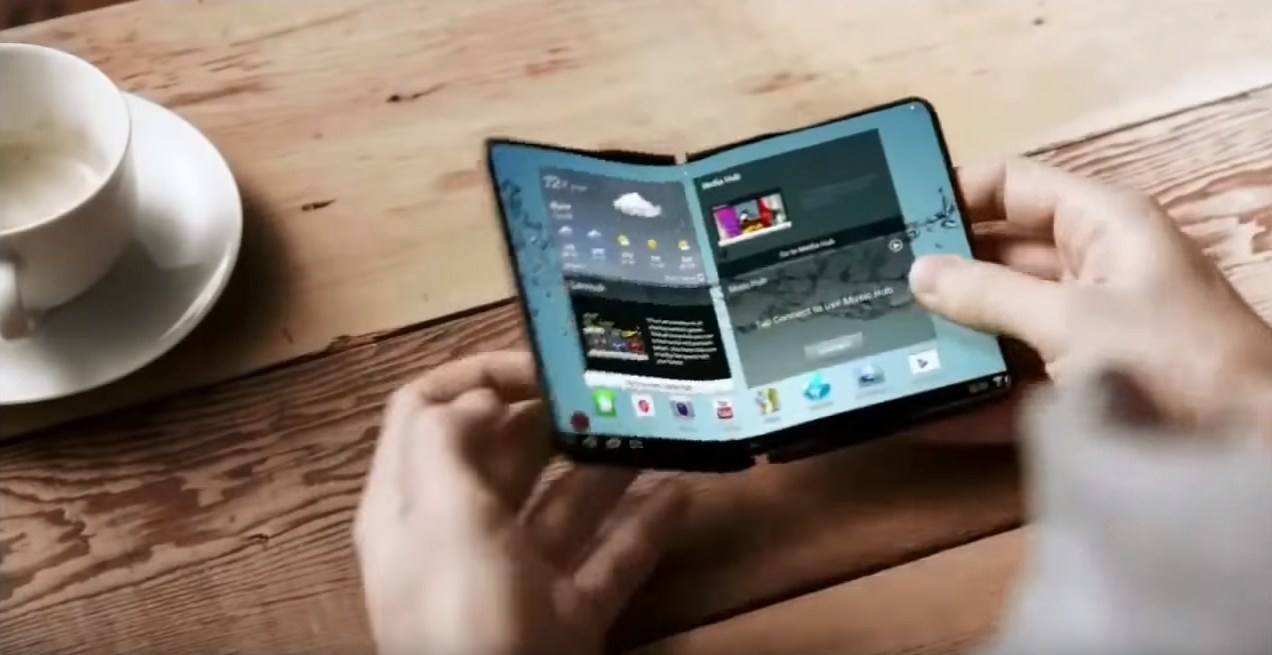 Samsung is at a tremendous advantage compared to most other phone manufacturers when it comes to screen technology, as another one of its divisions, Samsung Display, is one of the world’s largest display makers. (The only other mobile OEMs — original electronics manufacturers — with this capability that spring to mind include LG and Sony.) Samsung is therefore able to steer its research towards components that are well suited to handset differentiation, as well as provide the displays in sufficient quantities to its mobile arm.

LG in the POLE(D) position

It should be no surprise that LG is also looking to displays as a way to stand out from the many Chinese OEMs nipping at its heels (and, as has been happening more and more lately, leapfrogging it in sales). Its current solution, the dual-screened V10, has been critiqued as mostly a gimmick: the second screen is merely a “ticker” atop the primary display, offering somewhat limited additional functionality.

LG’s future technology of choice is the plastic organic light emitting diode display, or POLED. The nature of POLED screens allows them to take on shapes that would be impossible for other screen types, even the AMOLEDs used in Samsung’s edge devices.

POLEDS are so flexible that they can wrap completely around a device’s edge, creating true edge-to-edge displays. (The Samsung edge handsets, by contrast, simply curve the display’s edges downwards, meaning that they still contain bezels of some thickness). I’ve heard that we’ll see the next generation of POLEDs from LG (starting with the G Flex handsets) sometime next year.

Finally, there’s the giant elephant in the room: Apple.

For a company that largely defined the form factor of the modern smartphone, Apple has since played it safe when it comes to the design of its phones — and for good reason. With between one and three iPhones introduced each year, the Cupertino giant has little margin for error. When so few models are meant to appeal to such a large swath of customers, there’s almost no room for experimentation.

And yet, according to the Wall Street Journal, Apple may be doing exactly that next year, with a handset or handsets poised to be the tenth generation of iPhones. But Apple hasn’t really had a breakthrough display technology since the iPhone 4’s Retina Display — now humorously considered low pixel density — and the 2017 model sounds like it will be more of the same: a curved display in the vein of Samsung’s edge devices.

The new designs can’t come soon enough for Apple, whose 2016 iPhones are almost certainly going to retain a very similar design for an unprecedented third year in a row. Just as consumers were starving for bigger devices when the larger iPhone 6 and 6 Plus debuted in 2014, they’ll be hungry for a significantly refreshed design next year, and edge-to-edge displays should fit the bill nicely.

Innovative, nontraditional form factors are not a panacea that can magically transform a mobile manufacturer’s fortunes. Fundamentals, such as quality components, intuitive software, and long battery life still matter. But when even the most budget OEMs are beginning to offer decent experiences at ultra low prices, traditional premium device makers are in trouble.

At that point, differentiating on design is more than just a niche market grab — it’s a critical factor in keeping high-margin manufacturers from following Nokia and BlackBerry into the abyss.