But while the Galaxy S4 ticks off all the right check boxes for most, I can’t help but feel it’s missing something. For one, it doesn’t look that much different from last year’s Galaxy S III. The two phones share the same basic, plastic-centered design, as well as the “nature inspired” TouchWiz Android skin (which is impressive in its endless array of annoying sounds and alerts).

Similar to Samsung’s other recent mobile devices, like the Galaxy Note lineup of tablets and smartphones, it looks like the company threw everything it had into the Galaxy S4 without pausing to question if people will actually need it. (Seriously, let’s give up on the idea of pausing video when you’re looking away from the screen — who wants that?!)

The Galaxy S4 is a solid smartphone; but if anything, it proves you don’t need taste when you’ve got an endless supply of cash and marketing muscle.

The Good: Fast, thin, and chock-full of features

These days it seems like slowdown is a thing of the past for any high-end smartphone. Most new devices are running modern quad-core processors from Qualcomm (or something equivalent), which makes them plenty fast.

It’s not a huge surprise, then, to find that the Galaxy S4 is no slouch when it comes to speed. The U.S. version of the phone is powered by a quad-core Qualcomm Snapdragon 600 processor running at 1.9 gigahertz. In comparison, last year’s Galaxy S III ran a 1.5 gigahertz dual-core processor. (Geeky aside: International versions of the Galaxy S4 run Samsung’s Exynos Octa chip, which is made up of two sets of quad-core ARM CPUs.)

The S4 simply screams when it comes to navigating the Android interface, launching apps, and juggling several apps at once. At times, it almost felt like the phone was anticipating what I wanted to do and launching apps the instant I touched their icons. (No, it can’t read your mind, though I wouldn’t be surprised if that’s a feature Samsung tries to add to a future model.)

As fast as it is, the real star of the Galaxy S4 is its glorious 5-inch screen. The display runs at a 1080p resolution (compared to the S III’s 720p screen), which is also becoming common among high-end phones (HTC’s One also has a great 1080p screen). Simply put, the new resolution means the S4 will be able to play 1080p HD videos at their full quality and deliver new heights of fidelity for pictures and text.

What’s most impressive about the S4’s large screen is that Samsung was able to make the phone both lighter and thinner than its predecessor, which had a slightly smaller 4.8-inch screen. The company achieved this by making the bezel around the screen thinner on the S4. The S4’s case also feels like it’s made from slightly higher quality (and lighter) plastic materials.

In my hands-on with the phone last month, I called it “the most comfortable 5-inch phone yet.“ After spending more than a week with the S4, that statement feels even more true. It’s a phone that may even turn some big-phone haters around (though it does beg the question, where does Samsung go from here without treading into Galaxy Note territory?). Now, if only Samsung would use something other than cheap plastic for its cases (more on that below).

The Galaxy S4’s camera is yet another big upgrade, going from the Galaxy S III’s 8 megapixel shooter to 13-megapixels and adding a slew of new camera features. After taking a few photos, the S4 appears to take noticeably sharper photos than its predecessor. I also appreciated its new photo modes: “Drama” lets you show someone moving over time in a sequence of static photos (for example, it’ll show you several snapshots of someone jumping off a diving board); “Eraser” lets you easily cut out unwanted people and scenery from your perfect shot; and “Animated photo” lets you create an animated GIF, similar to what mobile app Cinemagram does.

Somewhat ingeniously, Samsung has also implemented a new feature that lets you use both the front and rear cameras while taking pictures or video. This lets you get your mug in a group shot without much effort, and it could also be useful for recording your reaction to something you’re filming (which could be very useful for citizen journalism). The phone’s front camera can either place you in a cheesy bubble over the video or photo, or directly side-by-side for a split-screen shot.

I don’t know how much I’d use some of those features, but it’s nice to see Samsung experimenting with new camera modes. Check out some test shots from the S4’s camera below.

Samsung also added a few gesture-based software features to the S4 that may seem gimmicky at first, but could be useful for some users. With “Air gesture,” you can simply wave your hand over the S4’s screen to perform simple functions, like scrolling up a web-page or answering a call (while working together with Samsung’s “Driving mode”). Even more intriguing is “Air view,” a technology which lets you preview information on the S4 simply by hovering your finger over the screen. It’s an evolution of a feature Samsung originally introduced with the Note devices (though it previously required a stylus).

Unfortunately, both of those features only work within Samsung’s apps at the moment, which drastically limits their usefulness. The company says it may eventually open up its APIs so other developers can implement the gesture features. As an example, the Galaxy S4 ships with a special version of Flipboard that works with Air view.

The Bad: Samsung needs a dose of good taste, stat

Samsung has made plastic cases a core part of its mobile design over the past few years, but it’s becoming increasingly jarring to see flimsy plastic in supposedly high-end devices. The Galaxy S4’s plastic case stands in stark contrast to the HTC One’s slick and tasteful unibody metal design.

Above: HTC’s One, this is what good taste looks like.

I’ll admit, most buyers probably won’t care about the S4’s plastic case — they just want the latest and greatest overhyped Android phone. There are also a few benefits to having a plastic case, including a removable rear cover for swapping out batteries and adding more storage.

But as a fan of good design, I hope Samsung eventually figures out a way to bring higher-quality materials into its devices. After testing out plenty of smartphones, I’ve learned that the way they feel in your hand is one of the most important aspects of a phone — though it’s something most buyers don’t spend too much time thinking about.

Taste is something Samsung is sorely missing with its TouchWiz Android interface as well. The company went a bit overboard with the whole nature theme in the S III, and while that’s a bit toned down with the S4, this phone is still filled with an array of silly sounds (the droplet noise for selecting buttons and options is particularly annoying).

Samsung has also added several TouchWiz features that seem downright useless: “Smart pause” automatically stops video when you look away from the screen, solving a problem for practically no one; and “Smart scroll” lets you navigate text by tilting the screen up and down. I’ve seen plenty of apps try to implement some sort of gesture-based scrolling, but they’ve generally been too unwieldy to use for prolonged periods. Samsung’s Smart scroll didn’t fare much better.

It only takes one glance at the S4’s ugly notification tray (below) to see Samsung needs design help — and fast. 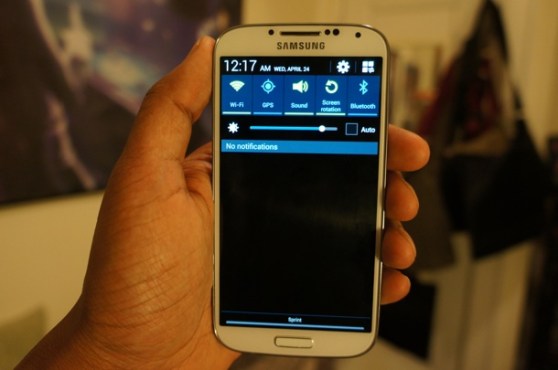 While every other Android manufacturer struggles with sales — even Google-owned Motorola Mobility — Samsung is sitting pretty at the top of the mobile industry. Last year, Samsung sold 384.6 million mobile phones (more than half of which were smartphones), while Apple sold 130 million iPhones, according to Gartner.

Samsung’s secret is that it has its hands directly in most of its device’s components (a topic that this excellent BusinessWeek profile explores in-depth). The Korean company builds the displays, memory chips, and, depending on the region, processors for its smartphones (after sneaking its way into markets and building those components first for other companies, including Apple).

Samsung’s smartphone dominance means that other suppliers favor it as well. The delay of HTC’s new One flagship phone, which led directly to HTC reporting its lowest profits ever, was partially due to suppliers losing faith in the company and possibly prioritizing Samsung’s orders, the Wall Street Journal reports.

In the consumer electronics industry, only Apple shares the sort of manufacturing power Samsung wields.

Mobile success is a recent thing for Samsung. Its first wave of Galaxy S phones didn’t have much of an impact, though the Galaxy S II proved the company was willing to learn from its mistakes. With the Galaxy S III, it was clear Samsung had poured just about everything it had into creating a singular killer Android phone. The company ended up selling more than 50 million Galaxy S III units since its launch, according to Samsung mobile head J.K. Shin.

Now the smartphone landscape is even more competitive and Samsung is facing a serious contender with HTC’s One (despite its delays, it’s an excellent phone) and whatever Apple has cooking up next.

The Verdict: a solid phone just shy of greatness

At this point, Samsung is in such a charmed position that the Galaxy S4 is already a guaranteed success. That’s likely why Samsung focused on just upgrading its internals rather than rethinking the overall design. It’s similar to what Apple has done with the iPhone 3GS and iPhone 4S (although Samsung at least made the S4 thinner and lighter than its predecessor).

You could certainly do a lot worse than the Galaxy S4, but I’d recommend waiting for HTC’s One (full review coming soon), or for an LTE variant of Google’s Nexus 4. The One is everything I’ve ever wanted in a smartphone, and the Nexus 4 offers the purest Android phone experience yet.

Now that Samsung’s a mobile leader, I just hope it doesn’t get lazy. It’s figured out how to build a killer phone — now it needs to learn how to build a tasteful phone. (And hopefully avoid further debacles like the S4’s cheesy NYC launch event.)