Samsung officially announced the Galaxy S5 today at the Mobile World Congress in Barcelona. But for the unlucky press who couldn’t make it to Spain, the company also held a small media event only a few blocks away from Apple’s Soho store.

At this point, it’s hard to be surprised by Samsung’s Galaxy S releases. The new Galaxy is faster, sports a bigger screen, and is slightly lighter than last year’s model — but you could also rinse and repeat that statement for the past few Galaxy releases.

And it certainly doesn’t help that the S5 looks much like the S4 and S3, with a plastic case and rounded shape. (This time around, Samsung tried to gussy up its flagship with brighter colors and a perforated case design similar to the faux-leather design from the Note 3.) 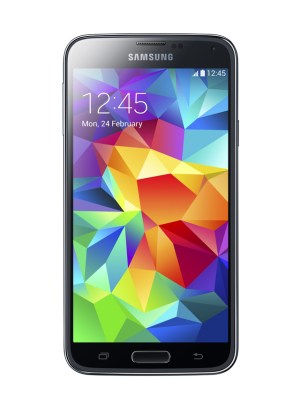 “They want a simple yet beautiful camera. Faster yet seamless connectivity… And our consumers want a phone that can help them stay fit.”

The S5 sports a 5.1-inch screen — just a tenth of an inch bigger than the S4 — with the same 1080p display as its predecessor. (In Samsung’s defense, it’s kind of ridiculous to go beyond 1080p on a 5-inch screen). Under the hood, it’s powered by a 2.4-gigahertz quad-core processor and 2 gigabytes of RAM.

As previously rumored, the S5 also has an integrated fingerprint scanner in its home button. Unlike the iPhone 5S’s Touch ID, you’ll need to swipe your finger on the S5’s fingerprint sensor.

The S5 is also water and dust-resistant, which means it should be safer to take in dirty and wet environments — though you probably shouldn’t try dunking it in water.

The big difference with the S5 is its 16 megapixel camera, which Samsung claims is much faster than the S4’s shooter. In particular, Samsung has added new autofocus modes that should make it easier to take that perfect shot. The camera can take 4K video, and it supports real-time HDR as well as HDR within videos.

Samsung has also expanded on its health offerings with the S5 thanks to a new heart-rate sensor that’s built into its flash module. You just need to hold your finger up to the flash to get a reading.

The S5’s battery is slightly larger than its predecessor, and Samsung has also introduced an immensely useful new “Ultra Power Saving Mode” that shuts off non-essential features from the phone when you run low on power. Samsung says the new power saving mode can stay in standby for 24 hours, even when your battery life is below 10 percent.

As usual, Samsung didn’t divulge any pricing details yet; that’s usually left up to the carriers. You won’t have to wait too long for more information though, as Samsung says the S5 will be available worldwide in April.